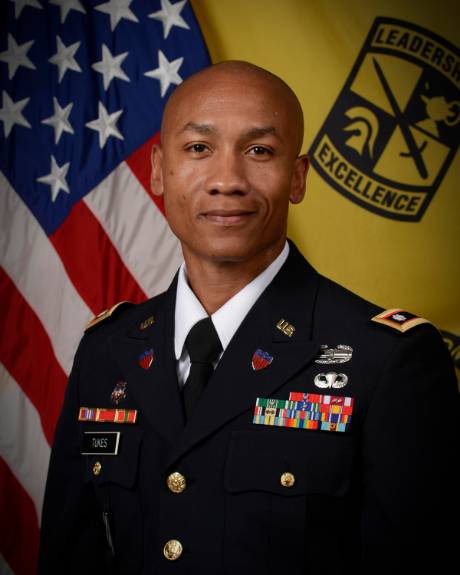 Lieutenant Colonel Tavares A. Tukes is from Savannah, Georgia.  He graduated from Georgia Military College, Milledgeville Georgia and Mercer University, Macon Georgia with a Bachelor of Arts in Psychology. He holds a Master of Arts in Human Resources Management from Webster University. He enlisted in the Army as a Combat Medic for the Georgia National Guard following High School Graduation in 1996.  He was commissioned through ROTC as a Second Lieutenant in the Adjutant General’s Corps with a branch detail to the Infantry in 2000.

During his initial tour he served with the 1st Cavalry Division, 3rd Brigade, 2-7 Cavalry Battalion as Mechanized Platoon Leader, Assistant S-3 and subsequently as an Assistant Brigade S-1for 4th Brigade, 1st Cavalry Division at Fort Hood, Texas, where he deployed in support of OIF II. Taji Iraq.  After completing his branch detail with the Infantry, he attended training at the Adjutant General Officer Advanced Course in 2005.  Upon graduation, he served as a BOLC instructor at Fort Benning.  He served as a Squadron S1 and Adjutant for 3-1 Cavalry, 3HBCT, 3ID and subsequently as the Brigade S1 for 3HBCT, 3ID where he deployed in support of OIF V and OIF VII and Operation New Dawn.  Upon return from OIF VII, he was selected for the Training with Industry with duty at Microsoft Corporation, Redmond Washington, where he worked Veterans Affairs and Hiring in 2012.  He served as a Senior Team Leader and Instructor at Soldier Support Institute for AGCCC in 2013. He served as the Executive Officer assigned to the 120th Adjutant General Battalion (Reception), Fort Jackson, South Carolina. He served as the Team Chief of the Strategic & Essential Forces Team assigned to the Enlisted Personnel Management Division, Human Resources Command, Fort Knox, Kentucky. He served as a Board Recorder for the Department of the Army Secretariat, Fort Knox, Kentucky. He served as the Executive Officer to the Commanding General of Cadet Command and Fort Knox, Fort Knox Kentucky.  In his current assignment, he serves as the Department Chair and Professor of Military Science for the University of South Alabama, Mobile.