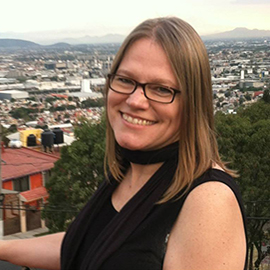 For over twenty years, Dr. Chimène Gecewicz has been sharing her love of learning, languages, and cultures with a wide variety of students. Her journey started when she was awarded a teaching assistantship while working on my Master’s degree in anthropology, and it has taken her on an adventure that provided the opportunity to teach at every level from kindergarten to university. Throughout her career, she has insisted on a research-based, student-centered approach. First as an instructor at the University of Southern Mississippi, then as a French teacher at Petal Middle School, and later as an English as a Second Language teacher, she has taken time to incorporate current research-based pedagogy into her classes. As a result, in the late 1990s, she created a STEAM-based curriculum for elementary level English as a Second Language students.  When she found herself teaching middle school and high school ESL learners in the mid-2000s, she incorporated many active learning approaches into her classes. And, more recently, as the Director of the English Language Center at the University of South Alabama, she designed courses based on both the flipped model and Team-Based learning.

In addition to having theoretical knowledge in the areas of anthropology, second language acquisition, and the teaching of languages, she has practical experience that enriches her approach to education. She has lived in England, conducted fieldwork in Africa, and traveled throughout Europe and Mexico. She has been involved in curriculum development, grant writing, teacher training, scheduling, and policy writing.

Roberts, B., and Gecewicz, K.C. (2014). All work and no pay. Women shouldering the burden of gender expectations and economic autonomy in Sub-Saharan Africa. Mizizi: A Collection of Essays on Kenya's History (pp. 335-342). Nairobi, Kenya: University of Nairobi Press.