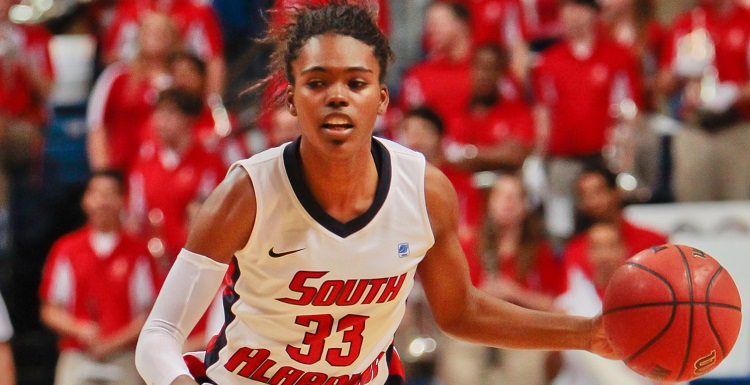 Mansa El played on the USA women's basketball team from 2010-2013. She now coaches boys basketball in Texas. “Having a hand in preparing them for life, that’s a pretty good feeling,” she said.

This story appeared in the spring edition of South Magazine.

Mansa El has been coaching high school boys for three years, but she still turns heads in Houston.

The former University of South Alabama point guard remains one of the few women in the country coaching boys basketball. At Cypress Springs High School, where she was an assistant coach of the varsity team before accepting a position at Clear Falls High School last week, El hears the occasional comments from fans, parents and coaches. Even referees join the conversation.

“I had one ref ask what I knew about basketball,” she said. “I had another one say I would get more calls if I wasn’t so distracting on the sideline. The funny thing is that it never comes from the kids. The kids are the only ones that matter, and they don’t care. I do think it’s a good thing for the boys playing for me. They’re learning about adversity that they wouldn’t have known.” 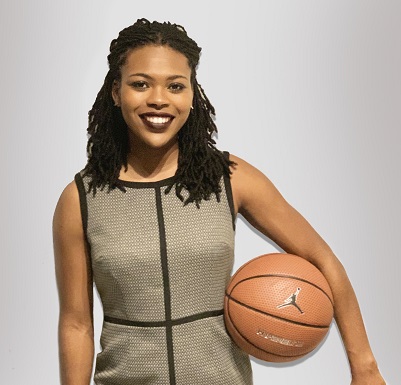 El, 30, played for the women’s team at South from 2010 to 2013. She went on to become a graduate assistant and assistant coach at Canisius College, West Virginia Wesleyan and the University of Houston. Along the way, she earned a master’s degree in human resources development and started a graphic design business called Magnify Creative Services.

“That’s something I’ve been doing for years,” she said. “Different coaches I’ve known over the years will come to me for different things. I’ve actually worked for the women’s basketball team at South Alabama.”

The Jaguars finished with a winning record in each of the three seasons El played in Mobile. The hardest part for El was injuring her knee — twice — and having to work her way back through surgery and rehabilitation.

“Those were some trying times, but that was the development of my mental toughness,” El said. “I was intent on learning more about the game, going over the scouting reports, following practice from a stationary bike on the side of the court.”

Rick Pietri, who was her coach at South 10 years ago, remembers what El went through as a Jaguar. She couldn’t play more than two days in a row, because of soreness in her knees, but she managed to stay focused on the team and help younger players learn the game.

“She was very thoughtful, very sensitive to everything going on around her,” Pietri said.

“She was a vegetarian who ate right and had diverse interests. She was somebody I thought could become anything she wanted to be.”

When El became a coach, he thought her combination of tenacity and tact would help her succeed. At South, El had a nickname — “Whispers” — that came from her teammates.

“She had this thin, high-pitched tone, but she also had this gravelly hard voice she used on the court,” Pietri said, laughing. “As a coach, she’s probably using that hard voice.”

The Value of Discipline

El’s mother is from Houston, but her father comes from Ghana in West Africa. For years, he led a traditional dance team on tours of the United States.

“The Ishangi Family Dancers,” El said. “We grew up dancing and playing instruments. We traveled around the country, from the Smithsonian to small schools and rec centers. I learned the value of discipline, practicing your craft every day. It gave me great footwork, I will say that. I was great at every sport I ever played.”

Her high school team won a Texas state championship. She played a year at North Texas State before transferring to South Alabama, where she earned a degree in interdisciplinary studies. Coaching finally brought her home to Houston.

“Having a hand in preparing them for life, that’s a pretty good feeling,” she said. “I think a lot of times, by the time you get to college, it’s too late.” Coaching teenaged boys was not a difficult transition to make. The X’s and O’s remain the same. The only change is that she has to make sure her players are dressed before she enters the locker room.

“When people ask me the difference, I say they’re very similar,” El said, laughing. “They’re the same creatures we used to be at that age. They want attention, they crave attention. They want to be liked, they want their coach to like them. Everybody wants to be a star, and nobody knows their role.”

In recent years, women coaches have become more common on men’s teams. Becky Hammon is a well-known assistant coach with the San Antonio Spurs in the NBA.

In Houston, El has been featured in newspaper stories and television broadcasts. She tries to take it in stride. A little publicity for her team is a plus. At Cypress Springs, El started out as an English teacher. Then there was an opening for a junior varsity basketball coach. She met with the head coach, they talked for three hours, and he offered her the job.

“When I met the team, he’d already introduced me, already shown them my highlight film from South Alabama, so that was a first-level connection,” she said. “And they knew I’d coached at the college level, so that was second-level, because that’s what they aspire to be.”

El’s goal is to become a head coach of a high school team, but she isn’t sure when she’ll get the opportunity. She has other options.

“I think of consulting, now and then, using my master’s in human resources,” El said. “I think it would be cool to go in and help people assess what their issues are.”

During the summer, she works with boys and girls in a Houston AAU basketball program called FAM Elite. The emphasis is on basic skills, conditioning and teamwork. FAM stands for Fundamentals And Mechanics.

El has stayed in touch with some of the Jaguar players she met in Mobile. She’s been to a few of their weddings. One of her teammates now lives in Houston. It’s been awhile since anyone called her “Whispers.”

On the basketball court at Cypress Springs, boys call her “Coach” or “Coach El.” Other titles are trickier.