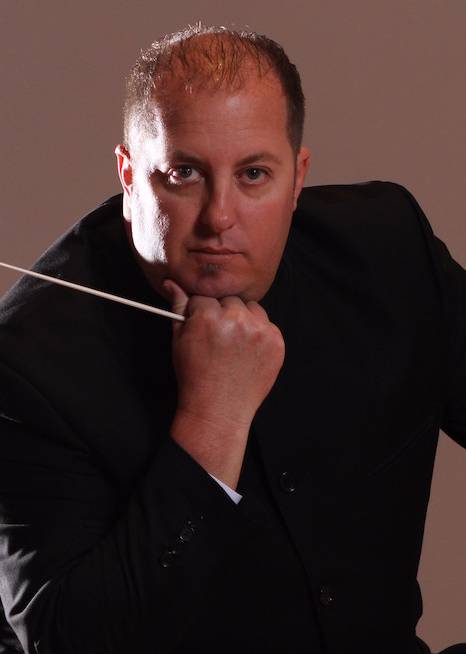 Dr. Jason Rinehart was appointed to the faculty of the University of South Alabama in 2016 as Associate Director of Bands and Director of Athletic Bands. He directs the 250-member Jaguar Marching Band, the Jag Band and oversees the USA Jaguar Winterguard. Dr. Rinehart directs the USA Symphony Band, USA Orchestra, and is the Music Director for the USA Opera program. Dr. Rinehart was appointed Conductor of the Baldwin Pops in July 2017.

From 2007-2016, Rinehart served as Assistant Director of Bands, Director of Athletic Bands, and Director of Orchestras at the University of Louisiana, Monore. At ULM he directed the Sound of Today marching band, the Technical Fowls basketball pep band, the Symphonic Band and guest conducted the Wind Ensemble. Prior to his appointment at ULM, Rinehart taught at the University of Missouri-Kansas City’s Conservatory of Music, Benedictine College, and St. Louis Community College.

Dr. Rinehart is in demand as a clinician and has worked with ensembles in Louisiana, Kansas, Missouri, Texas, New Mexico, Oklahoma, Mississippi, California, Ohio and Illinois. Jason is in his seventh year as third horn with the Monroe Symphony Orchestra and has played with numerous orchestras in Texas, New Mexico, Kansas and Missouri. His composition Three Russian Miniatures for Horn and Piano is published by Cimarron Music Press, and his Sing me now asleep for mezzo-soprano and flute was premiered in NYC by Rebecca Ashe and Katherine Crawford.

Dr. Rinehart has been involved with the drum and bugle corps activity for over 20 years beginning as a marching member with the Sky Ryders and Phantom Regiment and was previously taught with Pioneer, Capital Regiment, and the Boston Crusaders, and was the Brass Caption Head for the Glassmen, and Spirit of Atlanta.  He now serves as an adjudicator for Drum Corps International and the Central States Judges Association.