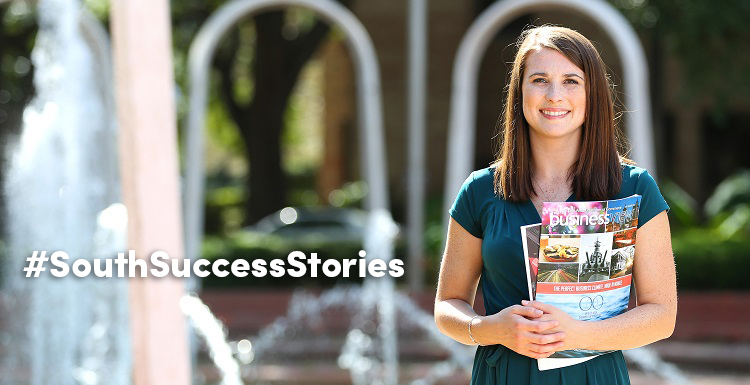 As a student, Emily Jerkins immersed herself in the full South experience. She was treasurer of the Student Government Association, a Jag Pal, a member of the Southerners and a student worker in the Office of Institutional Effectiveness.

Emily Jerkins is one of the visiting speakers this week, Oct. 17-21, as the Mitchell College of Business observes National Business Women’s Week. She is guest lecturer in MCOB’s Principles of Macroeconomics and Principles of Microeconomics classes. More than 30 prominent businesswomen are speaking in MCOB classrooms, sharing their personal stories and their career advice as part of the Mitchell College of Business commitment to educating future business leaders.

Emily Jerkins’ childhood dream of becoming a doctor changed after she discovered her true career path at the University of South Alabama.

Today, the 23-year-old is research manager for the economic development division of the Mobile Area Chamber of Commerce. In that position, she generates, analyzes and publishes information to support economic development activities that serves the needs of prospective companies, existing industries and Chamber members. As a member of “Team Mobile,” she assists in promoting Mobile as a top place for doing business.

“As a high school student, I volunteered at North Baldwin Infirmary, and I was going to be a biomedical major at South, then go to medical school. I had it all planned out. I enjoyed the idea of being a doctor, but through my volunteer work, I realized that medicine wasn’t the right career path for me,” she recalled.

Like many freshman students who decide medicine isn’t for them, Jerkins changed her career choice to law, then signed up to major in political science.

“I’d always liked the social sciences, particularly political science,” Jerkins said. “Then, I decided to minor in economics, and I fell in love with it. That’s when I realized I’d always been logical and analytical, and economics was a natural fit for me, so I changed my major again.”

As a student, Jerkins immersed herself in the full South experience. She was treasurer of the Student Government Association, a Jag Pal, a member of the Southerners, and a student worker in the Office of Institutional Effectiveness, working under the direction of Dr. Angela Coleman, associate vice president for institutional effectiveness.

“Not everyone has the temperament to be a researcher, but Emily was a natural fit for our office. She was meticulous and paid attention to the smallest details, but she also grasped the big picture,” Coleman said. “She understood how all the little pieces of data and evidence were used to make decisions and draw conclusions. Often, people can do one or the other, but not both. She was not just our student worker, she was a trusted, dependable member of our team, and we missed her when she left.”

For her part, Jerkins is quick to credit her campus job and volunteer work at South with giving her the background, connections, skills and confidence to land a job she loves so soon after graduating in May 2015. And, she gives Dr. Bob Wood, dean of the Mitchell College of Business, the credit for mentoring her while she was an MCOB ambassador.

“I began interning that March, and a project coordinator job opened up around graduation. Then, the week before graduation, they offered me that job,” Jerkins recalled.

Nine months later, she landed the real job of her dreams.

When she isn’t working, Jerkins said she spends her time reading, traveling and spending time with family and friends. She lives at home with her parents, Darren and Lisa Jerkins, as well as brothers Dalton, 20, and Graham, 15.