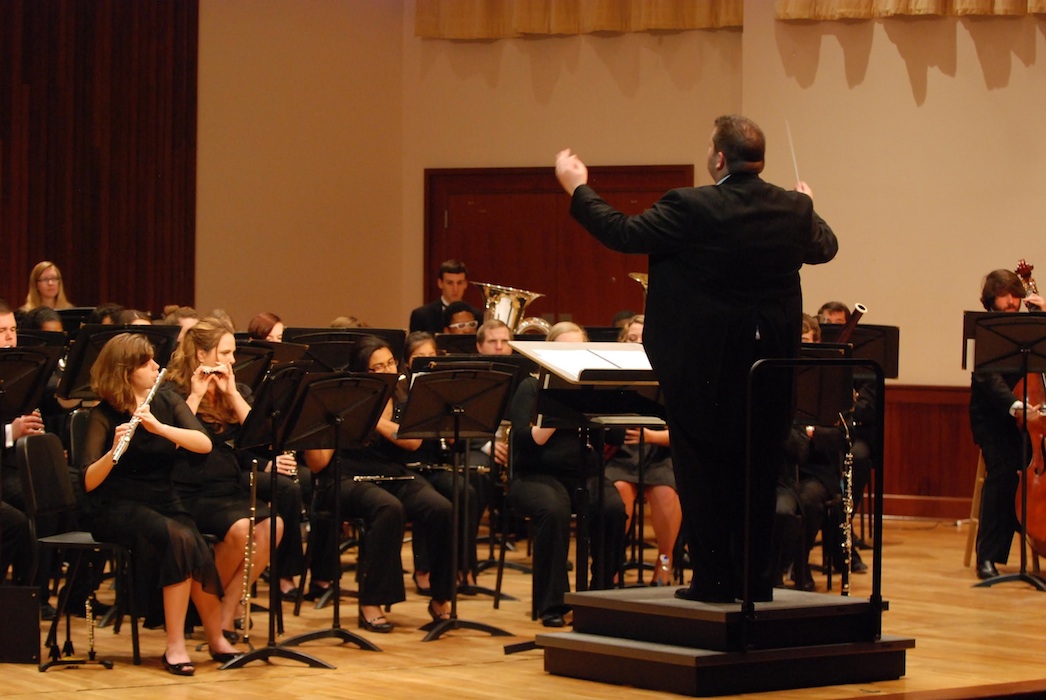 Click here to view the livestream of the concert!

USA's Department of Music is pleased to announce a Winter Band Concert presented jointly by the Symphony Band and the Wind Ensemble. The event is scheduled for Tuesday, February 24 at 7:30 p.m. in the Recital Hall of the Laidlaw Performing Arts Center. The Symphony Band, under the direction of Michael Phillips, opens the concert with music Malcolm Arnold, John Paynter and Howard Hanson, and the Wind Ensemble follows with music of Percy Fletcher, H. Owen Reed and John Philip Sousa, conducted by William H. Petersen.

Tickets for this Musical Arts Series event will be sold at the door only. Admission is $8 general and $5 for USA faculty & staff, USA students, youths under 18 and all senior citizens (cash or check only). Persons needing more information about this event or in need of special accommodation may call (251) 460-7116 or (251) 460-6136.

About the Winter Band Concert

Under the direction of Dr. Michael Phillips, the Symphony Band will open with Malcolm Arnold's Prelude, Siciliano, and Rondo originally written for British brass bands as the "Little Suite for Brass," which became a brilliant transcription by one of the most historic band directors of the 20th century Jonathan Paynter. Chorale and Alleluia is an original work by 1944 Pulitzer prize winning composer and 40 year director of the Eastman School of Music, Howard Hanson. Originally entitled Nocturne and Dance – Incantation and Dance went on to become John Barnes Chance's first published piece for band. Lastly, performing the work of a composer that continues to enhance the repertoire today, the Symphony Band's finale will be David Maslanka's Mother Earth Fanfare.

The University of South Alabama Wind Ensemble, under the direction of Director of Bands Dr. Will Petersen, will open their Spring 2015 concert series with Percy Fletcher's wonderful comedy overture, Vanity Fair. La Fiesta Mexicana, the monumental symphony for band by H. Owen Reed is the featured work for the Wind Ensemble. Cast in three movements, each movement is programmatic in nature and depicts a festival scene for the Blessed Virgin Mary. Reed experienced much of the folk music that inspired his composition during a Guggenheim Fellowship in 1948 and 1949 in several Mexican Cities. The evening's concert will close with John Philip Sousa's El Capitan, one of Sousa's most famous marches that was part of his larger operetta by the same name.