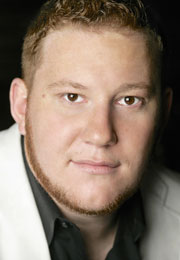 Nicholas Brownlee, an alum of the University of South Alabama Department of Music (BM 2012, Vocal Performance), has been named as one of only 9 finalists for this year's Metropolitan Opera National Council Auditions. Brownlee, who is currently in the Young Artist Program with Los Angeles Opera, will perform with the Metropolitan Opera Orchestra in the Grand Finals concert, which will be broadcast nationwide on the Metropolitan Opera Radio Network, on Sunday, March 22nd at 3pm EDT.

The Metropolitan Opera National Council Auditions is a program designed to discover promising young opera singers and assist in the development of their careers. The auditions are held annually in thirteen Regions of the United States and Canada. There are forty-one Districts within these Regions, each providing an opportunity for talented singers to enter the Auditions Program at the local level. Winners of the District auditions advance to their Region Finals where they compete to win a trip to New York to participate in the National Semi-Finals, a competition held on the stage of the Metropolitan Opera. When Brownlee was a student at USA, he was named a National Semi-Finalist from his auditions through the Gulf Coast Region; this year, he achieved the same honor through the Western Region, and has moved on as a Finalist. Brownlee will now join his fellow National Finalists to compete next Sunday in a public concert, the Grand Finals Concert, accompanied by the Metropolitan Opera Orchestra. The jury awards approximately five Grand Winner awards of $15,000 each. The remaining National Finalists receive $5,000 each.