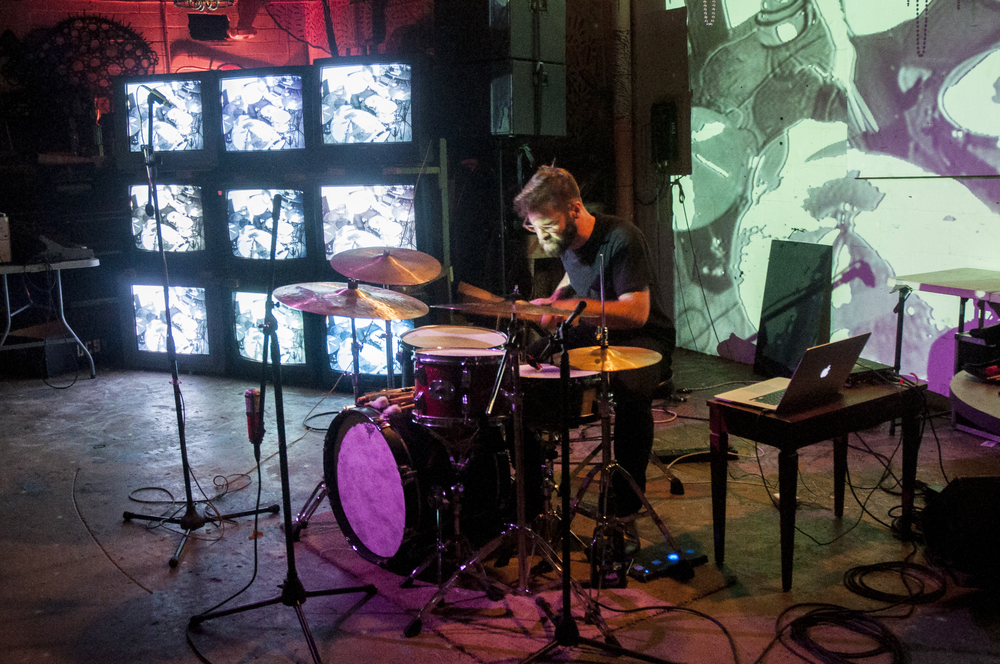 The USA Percussion Studio is proud to host percussionist/composer Sean Hamilton in concert on Friday, September 9 at 7:30 p.m. In the Laidlaw Performing Arts Center Recital Hall. Mr. Hamilton will present a multimedia concert with improvisation and live sound processing on drum set and various electronic devices. Please refer to Mr. Hamilton's biography below for more information.

As a percussionist, Sean gave the world premiere of Stuart Saunders Smith’s Queen Anne’s Lace for solo vibraphone, an evening-length work commissioned by Sean. He has given numerous performances of improvised compositions for solo drum set and electronics, including one presented while serving as an artist-in-residence with Leeds Improvised Music and Experimentation (LIME) in Leeds, UK, and one at the “With Hidden Noise” exhibition at the University of South Florida Contemporary Art Museum. He has also given solo and joint recitals in Tampa, Orlando, and St. Petersburg, Florida and Slippery Rock, Pennsylvania, with additional performances in Georgia, New York, North Carolina, South Carolina, Pennsylvania, and the United Kingdom. He can be heard on several releases with the McCormick Percussion Group, including Plot: Music for Unspecified Instrumentation and Between Rock and a Hard Place, released on Parma’s Ravello Records, two albums with his electroacoustic duo Mechanical Bull, and also as a performer with the Florida Wind Band in Tampa, Florida.

Sean’s original compositions include works for solo instruments, chamber groups, electroacoustic mediums, and fixed media. His work has been performed both in the United States and in Europe, with recent performances including I, Alone for tuba and electronics at the inaugural Electrobrass Conference in Tuscaloosa, Alabama, and The Days Are Growing Longer for solo percussion premiered at the University of North Texas. His sound installation Pedestrian Bridge was also recently shown at The Temporary Sculpture Garden, presented by The Charles Adams Studio Project in Lubbock, Texas.

In addition to his work as a composer and performer, Sean has founded several artistic projects, including Mechanical Bull, an electroacoustic duo he shares with guitarist/composer Nathan Corder, Hyperbolic Chamber Music, a contemporary music series he co-founded in St. Petersburg, Florida with Jesse Thelonious Vance and Grace Juliano, and The Impulse Collective, a group of musicians, dancers, visual artists, and writers dedicated to improvisation.

Sean’s holds a Master of Music degree in percussion performance and music composition from the University of South Florida, where he studied with Robert McCormick (percussion), Baljinder Sekhon, and Paul Reller (composition). He also holds a BM in Music Education from Slippery Rock University in Pennsylvania where his studies included percussion, composition, jazz/improvisation, and pedagogy. Outside of his formal studies, Sean has studied percussion, composition, repertoire, and performance practice with Stuart Saunders Smith and Sylvia Smith, repertoire with Christian Wolff, composition with Robert Morris, and vibraphone with Berndt Thurner (Vienna).