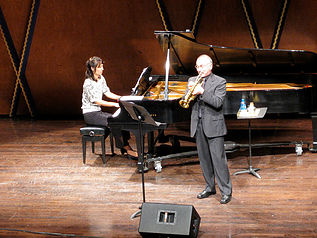 Ivano Ascari will perform a guest trumpet recital in the Recital Hall of the Laidlaw Performing Arts Center at 7:30 p.m. on Tuesday, October 9. The recital will consist of a wide variety of highly interesting and entertaining works for trumpet and piano.

Tickets for this Department of Music event will be sold at the door only. Admission is $8 general and $5 for USA faculty & staff, USA students, youths under 18 and all senior citizens (cash or check only). Persons needing more information about this event or in need of special accommodation may call 251-460-7116 or 251-460-6136.

About the guest artist

After graduating from the Parma Conservatorio, Ivano Ascari began the musical career as Principal Trumpet in the Bolzano Symphony Orchestra, from 1978 to 1993, performing many concertos as soloist. Before and after that period he has played, among others, with the orchestras of Teatro alla Scala in Milan, RAI (radio and tv national broadcasting) in Turin, Teatro Comunale in Bologna. In the meantime Ivano was regularly popping over to Paris to study with Pierre Thibaud. From 1977 to 2001 with the “Verona Brass Ensemble” has performed for Pope John Paul II at the Vatican, in many European countries, in China, in the USA; organized an international festival of brass groups every two years (1985-1999); won the competitions in Ancona and in Stresa (Italy); recorded both Renaissance music and contemporary music. On leaving the Orchestra, Ivano became professor of Trumpet at the Conservatorio in Riva del Garda [lake Garda] and subsequently took up a similar position at the Conservatorio in Trento. This gave him more time to concentrate on a solo career. His taste for collaboration with composers later led to Ivano’s quest for new repertoire for trumpet when beginning his CD marathon. This marathon began when Ivano was asked to give a recital at the International Trumpet Guild Conference in 2000. He needed a ‘calling-card’, so he had the idea of producing a CD. The first CD was born. A long series of collaborations with composers from all arts and parts followed on. More invitations from the ITG and Universities ensued, more CDs ensued. One of the highlights of the valuable collection of new works, which has now swelled to almost a ninety, is a concerto by the Greek composer Dimitri Nicolau. Ivano was able to rekindle his liaison with the Bolzano Symphony Orchestra when he performed and recorded the Concerto with them. In 2016 he released the ninth CD of the series, titled "A Hundred Years" inspired by the Great War. He promoted the ITS (International Symposium Trumpet), a week’s holiday-studio for trumpet players that takes place in Ronzo-Chienis, val Gresta, Italy (2012, 2013, 2015). Quite apart from music, Ivano grained a Doctorate in Economics from the University of Parma; his thesis concerns the ‘Bread Politics’ in the dukedom of Guastalla (Northern Italy) in the second half of the Eighteenth Century. He also participates in a European interdisciplinary research work that intends to achieve a bronze replica of the karnyx, the war trumpet used by the Celtic populations, according to findings from Sanzeno (Italy) and Tintignac (France). During the fall of 2017, Ivano Ascari did a tour through US, offering recitals and masterclasses at a variety of institutions. In 2018 the tenth CD of the collection will be released and a new tour is planned in October 2018 (Michigan, Alabama, Florida, South Carolina).

Musical Arts Series Season Pass Holders may now reserve their place at concerts if they contact events coordinator Keith Bohnet by 5:00 p.m. the day previous to the event! Call 251-460-7116 or email kbohnet@southalabama.edu. Please mention the amount of seats needed AND be sure you are planning on being in place at least 20 minutes in advance of the concert! (Pass Holders only please! Held seats not claimed within 20 minutes of the performance may be offered to other concert attendees.)