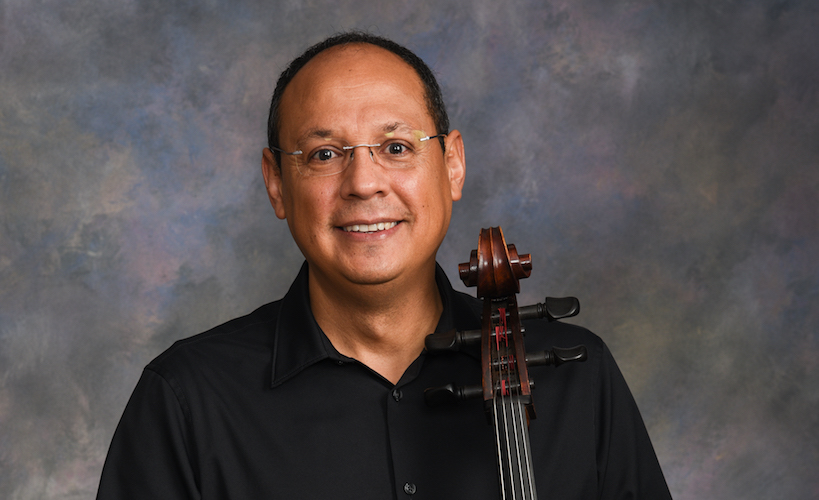 Cellist Moises Molina, along with pianist Po-Chuan Chiang and clarinetist John Craig Barker, will present a guest artist chamber music recital on Thursday, January 10 at 7:30 p.m. in the USA Laidlaw Performing Arts Center. The program will feature Brahms' Trio for Clarinet, Cello and Piano, along with works by Barber and Piazzola.

Admission to this Department of Music event is free and open to the public. Persons needing more information about this event or in need of special accommodation may call 251-460-7116 or 251-460-6136.

Moises Molina, a native of Honduras, is Professor of Cello and Assistant Director of the School of Music at Western Illinois University. He is an active soloist, chamber musician and clinician. He participated in the 2016 International Chamber Music Festival
in Lima and the 2015 Cusco Music Festival in Cusco, Peru. Dr. Molina was a guest artist/teacher at the Conservatorio Nacional de Música in Santo Domingo, Dominican Republic, the 2011 Tennessee Cello Workshop in Nashville, and the 2011 and 2017 Biannual Violoncello Festivals in Lima, Peru. He is also the cellist for the Julstrom String Quartet, a faculty ensemble at WIU. Dr. Molina holds a B.M. from Columbus State University and a M.M. and D.M.A. from Florida State University.

Po-Chuan Chiang, a native of Taiwan, performs nationally and internationally. Dr. Chiang has worked with many performers, both instrumental and vocal, in multiple styles and genres. This past Summer Dr. Chiang worked as a pianist for the opera program Scuola Italia in Sant’Angelo in Vado, Italy. This fall he performed in the winners’ concert of the American Protege Competition in the Chamber Music category at Carnegie Hall. Dr. Chiang currently works as a staff accompanist at Western Illinois University. Po-Chuan holds a B.M. in piano performance from the Tainan National University of the Arts in Taiwan in addition to a M.M. from the Boston Conservatory of Music and a D.M.A. from the University of Illinois at Urbana-Champaign.

A native of Mississippi that now calls Mobile home, clarinetist J.C. Barker is a graduate of The Juilliard School. He has performed as a soloist with orchestra and in recital in Europe, South America, and throughout the United States. He serves as both the principal clarinetist and the general manager of Mobile Symphony.