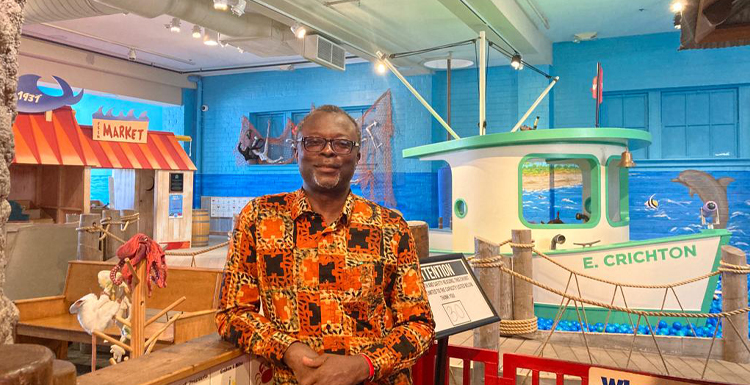 Dr. Dieudonné Gnammankou, a historian and assistant professor at the Université d’Abomey-Calavi in Benin will serve for one year at South Alabama as a Fulbright Scholar-in-Residence. He will connect his work about the slave trade on the West African coast with the stories of the Clotilda and the community groups in Africatown. The Clotilda is the last known ship to bring enslaved Africans to the United States.

The University of South Alabama has been selected to host a Fulbright Scholar-in-Residence from Benin, West Africa, to teach courses, give lectures in the USA Honors College and support expanding Study Abroad. The University’s Global USA division shepherded the effort.

The Fulbright Scholar, Dr. Dieudonné Gnammankou, a historian and assistant professor at the Université d’Abomey-Calavi in Benin, will connect his work about the slave trade on the West African coast with the stories of the Clotilda and the community groups in Africatown. The Clotilda is the last known ship to bring enslaved Africans to the United States; descendants of the 110 captives settled the Africatown community north of downtown Mobile.

“We are delighted to have Dr. Gnammankou join us at South Alabama this academic year, said Dr. David Messenger, professor and chair of USA’s Department of History. “He will be lecturing, working with the community of Africatown, and teaching two courses in the spring semester in the Department of History. It’s been several years since we have had an African historian on our faculty and offered such classes.”

Gnammankou’s specialty is African history, the slave trade and African connections to Europe and Russia.

“I accepted the position at the University of South Alabama for several reasons,” Gnammankou said. “First, because this opportunity is located near Mobile, in

Africatown where more than 100 Africans were deported through illegal trafficking. After they were freed, they founded Africatown. Second, I am a historian of the African Diaspora and a member of the Benin Museums Scientific Committee.”

Messenger said it will be valuable for the students to take classes from someone whose research and training are based in Africa.

“His perspectives will be wonderful for our students to engage with, and I know he is eager to engage and learn from them,” Messenger said.  “Dr. Gnammankou has been a visiting scholar in the United States before, in Ohio and in Washington D.C., as well as having taught courses in France and Cameroon.”

The Fulbright Scholar-in-Residence Program brings visiting scholars from abroad to the United States colleges and universities, helping the institutions internationalize their campuses and curricula and diversify the educational experiences of their students, faculty and professionals.

Shawn Dillard, prepared the University’s proposal as interim director of the Office of International Education and Study Abroad.

“This is the first Fulbright Scholar-in-Residence for the institution,” Dillard said. “In addition to supporting campus internationalization efforts, this unique program provides the university and the larger Mobile community access to an international perspective otherwise unavailable. This opportunity is especially unique considering Mobile’s link to West Africa through Africatown and the Clotilda.”

Kimberly Williams Pettway, an instructor in the Department of Sociology, Anthropology, and Social Work, was instrumental in recommending and securing Gnammankou to serve as the African history scholar at South Alabama. She met him while teaching a Study Abroad course in Benin in 2017.

“I was referred to Dr. Gnammankou by a Rasta elder I met while visiting in Benin,” Pettway said. “He and I discussed the Clotilda at that time, and he shared a wealth of knowledge, and we agreed to further collaborate. I believe this is the work of our ancestors, and I am simply excited that I was able to make the connections and build relationships that will benefit our students. I look forward to furthering collaborations since the goal is to get more students to study in West Africa.”

Gnammankou’s research is focused on Africans in European history and on African kings who fought against the slave trade. His research on Russian writer Alexander Pushkin and his African great-grandfather, Abraham Hanibal, received international acclaim and “ushered a new era in the study of Pushkin’s African ancestry both in and outside Russia. Gnammankou is one of the leading experts on Pushkin and his African ancestry.