Working for Her Tribe 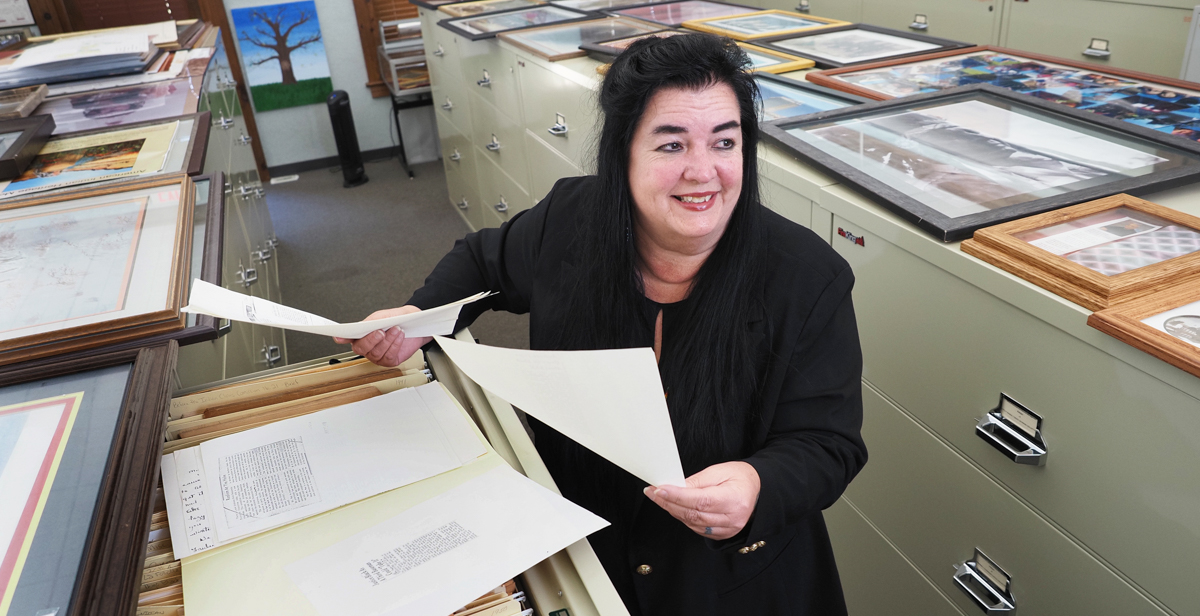 As archive director for the Poarch Band of Creek Indians in Atmore, Alabama, Dr. Deidra Suwannee Dees strives to preserve tribal history while sharing the story of Muscogee people with future generations.

Each fall, when team teaching a class in Native American Studies at the University of South Alabama, she flashes back to her own days as a working student.

“I love it – I absolutely love it,” she said. “I’ve taught in some of the same classrooms where I’d taken classes. It brings back so many memories.”

Dees often worked day jobs, as a student, so she took lots of night classes. One evening her old car broke down, and she offered a cab driver $8 – all she had – for a $12 ride to campus. He obliged, but she still needed a ride home.

At the end of class, she stood up and asked a room full of strangers for a ride home. She got two offers, accepted one, and went on with her college career at South.

“I learned a lesson that I always share with my students,” Dees said, laughing. “I tell them, don’t leave that first class without getting the phone numbers and e-mail addresses for two other students. You’re in this together. Help each other. Study together.”

Her father, Otis Dees, was born into the Creek community in Uriah, Alabama. Dees and her siblings grew up chopping cotton on a family farm near Wilmer, Alabama. Her father also worked as a janitor at the Greystone School in Mobile, where she was a student.

At South, she studied everything from communication to political science, and served as chair of the Minority Affairs Committee for the Student Government Association. One of her mentors was Dr. Zohair Hussein, a political science professor from Pakistan. She was active in campus politics and wrote articles for The Vanguard student newspaper.

In the 1920s, ’30s and ’40s, tribal leaders battled the Escambia County Board of Education, demanding that their children be given equal access to public school education. There were no laws against segregation at the time, so they filed suit because children were denied bus access to school.

“My research actually began at USA, where I did a senior thesis,” she said. “I was really proud of that, because it had never been documented before.”

Dees didn’t mind the freezing winters during her years of graduate school up North. She spent much of her time indoors, studying at campus libraries. She always had a zest for learning and an academic work ethic.

“I feel that my time at USA prepared me 100 percent for the Ivy League,” she said. “It was rigorous, certainly, but I wanted a degree from places that challenged me.”

After Harvard, Dees returned to the Gulf Coast, teaching at Pensacola Junior College and the University of West Florida. In 2011, she began working as director for the Office of Archives and Records Management for the Poarch Band of Creek Indians.

She helped strengthen ties with the University of South Alabama, where she served on the National Alumni Association Board.

In 2014, a donation from the tribe helped start the Native American Studies Program at South. In 2018, another gift named the Chief Calvin W. McGhee Grand Ballroom in the MacQueen Alumni Center.

South supporters in Poarch include Robert McGhee – grandson of Chief Calvin McGhee – who is now vice chairman of the Poarch Band of Creek Indians. He earned an anthropology degree from South in 1993 before going on to graduate school and government jobs in Washington, D.C.

Dr. Philip Carr, the Chief Calvin McGhee Professor of Native American Studies at South, has taught classes with Dees for more than a decade.

“It started out as a Native American History class and that morphed into Introduction to Native American Studies, which we’ve done for the last two years,” he said. “She’s great to work with. Her enthusiasm and insight add depth to the course. And she’s so current in what’s going in Native American studies.

“This is usually all new to students. They take the course because they have an interest, or a family connection, but there are often a lot of misconceptions, so they get a new understanding in the class.”

Carr, an anthropology professor, has visited the Poarch Creek archives and worked with tribal leaders since he came to South in 1999.

“I think it’s a very special relationship we have,” he said. “I don’t think a lot of universities have this kind of connection. And there wouldn’t be a Native American Studies Program without Dr. Dees and Robbie McGhee.”

From Cotton Fields to the Ivy League

Dees remembers hard work and long days as a child on the family farm near Wilmer. Sometimes she’d go to bed, exhausted, then force herself to get up and study.

“I hated it, but that was our life,” she said. “My dad was a farmer. We grew up picking cotton, chopping cotton, hoeing cotton. He also grew corn, hay and soybeans.”

Dees is lighter-skinned than her father – her maternal grandmother was Creek and Scots-Irish – so she often passed as white. She’s sure she faced less racism and bullying than many in the tribe. Poverty was the biggest obstacle in her life.

While a student at South, she worked as a temp. She had office jobs and desk work.

“It was a good experience, working at all those places,” she said. “It helped me pay the bills.”

At Cornell and Harvard, most of the students seemed well-to-do. The universities didn’t cater to poor students. She remembers being frustrated when school libraries didn’t stay open late at night or on holidays.

After college, Dees enjoyed teaching in Pensacola, commuting from Poarch, but eventually worked for the Poarch Band of Creek Indians.

She and her husband, a farmer, live in a tribal subdivision. She works at tribal headquarters, where she immerses herself in Native American culture. She’s a student as well as a teacher, taking weekly lessons in the Muscogee language, which she describes as beautiful but challenging.

“They have me in intermediate class,” she joked, “but I think I’m still a beginner.”

Dees and other members of her family follow Muscogee stomp dance traditions. She does public speaking engagements and attends conferences for archivists. She enjoys reading and writing.

One of her favorite authors is Joy Harjo, the United States Poet Laureate, who is a Native American from the Muscogee Nation in Oklahoma.

“I really like her – I’ve stomp danced with her,” Dees said. “There are a lot of writers, but she stands out. Her books are all around me, here and at home.”

The Poarch Creek archives offer hundreds of oral histories and written records from the last century. There are collections from J. Anthony Paredes, a Florida State University anthropologist, and Hugh Rozelle, an Atmore attorney.

Dees remains interested in the state politics and local issues of education for Creeks. The big picture of this civil rights struggle includes smaller efforts and alliances.

“They had a lot of allies with the white missionaries who were in the area,” she said. “That’s another story I’d love to write. I have a lot of books inside me that I’d like to write.”