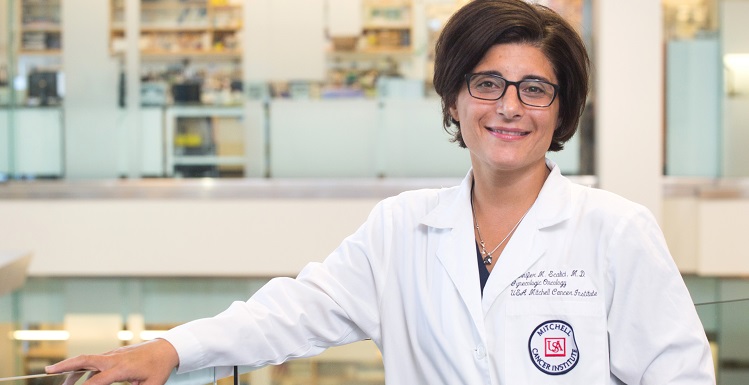 Dr. Jennifer Scalici, a gynecologic oncologist with the University of South Alabama’s Mitchell Cancer Institute, leads an MCI team partnering with Auburn’s poultry science department to determine if a compound developed inside the Mobile center can successfully prevent ovarian cancer in hens.

With testing set to begin “any day” on a potential preventive drug targeting ovarian cancer, the project’s lead researcher said perseverance and timing helped forge a “perfect partnership” that could foster future collaborations – and hopefully breakthroughs.

“Our collaboration with Auburn University has been critical in helping this all fall into place, and I really think there’s an opportunity to build on this new relationship for years to come,” said Dr. Jennifer Scalici.

Scalici, a gynecologic oncologist with the University of South Alabama’s Mitchell Cancer Institute, leads the MCI team partnering with Auburn’s poultry science department to determine if a compound developed inside the Mobile center can successfully prevent ovarian cancer in hens.

“In our minds, this is the best model to study prevention agents and probably the most easily translatable to humans,” Scalici said, noting hens are the only species outside of human females in which ovarian cancer develops naturally.

Scalici explained roughly 40 percent of all hens between the ages of 2 and 5 develop ovarian cancer, while the incidence rate in human females is less than 1 percent. Despite this statistically high occurrence rate in hens, the lion’s share of pre-clinical research being performed in the field focuses on mice as test subjects.

“Ovarian cancer is not something mice develop spontaneously. You have to physically inject them with it, and that presents a problem when you’re working on prevention research. If your test subjects are being manipulated, then your results are going to be less organic and less likely to translate to human clinical trials down the road,” Scalici said.

Combine the MCI team’s theory, a compound developed in-house by Piazza, Auburn’s poultry science department and a $300,000 U.S. Department of Defense grant, and MCI Director Dr. Michael Finan said the result is a textbook example of the translational research the academic treatment and research facility was established to foster.

“Translational research means moving an idea from bench to bedside, and this is a perfect example. If a drug is successfully developed that proves to be safe and effective in chickens, then we may be able to move on to human clinical trials,” Finan said, noting success in this early stage research could reasonably lead to human trials within five years.

“Translational research means moving an idea from bench to bedside, and this is a perfect example."

“We’re always looking for new ways to detect and treat cancer, but here we’re talking about a compound that potentially prevents cancer from developing in the first place, and with the U.S. Food and Drug Administration working to speed up their processes, we’re hopeful for a swift development timeline,” he said.

Although the grant award was announced in September, Scalici said logistics have delayed the project’s launch. Because the hens are so much larger than traditional lab mice, production of MCI-030 in quantities large enough to treat the test pool had to be subcontracted to a Chinese firm and has just now been delivered.

Meanwhile, Scalici said her team has been attempting to work with Auburn on “something like this” for several years, but the funding mechanisms were not in place.

“In 2014, we tried with a similar drug and couldn’t get funded. The DoD grant might be small, but the timing is perfect, and we’re confident it will translate into bigger projects – projects where we’ll have enough data to start something big,” she said.

Indeed, the two-year pilot award, which Scalici said follows a “high-risk, high-reward” formula, is being funded by the DoD’s targeted ovarian research program.

“It’s only because of our access to Auburn’s poultry science facilities that any of this is moving forward right now. They have been absolutely vital,” she said.

Indeed, Finan said the Auburn researchers will administer the compound to the hens in their feed and periodically draw blood for testing which will take place at MCI.

“All of us have an interest in trying to move science forward, and when we can find ways to work together like this that are mutually beneficial, everybody wins,” he said.