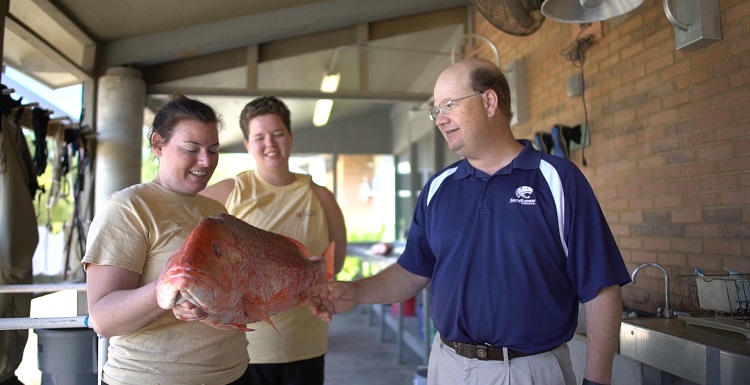 Dr. Sean Powers, right, chair of marine sciences at the University of South Alabama, is part of a $12 million independent study that includes 21 scientists from 12 institutions who will seek to determine how many red snapper live in the Gulf of Mexico.

Imagine Dr. Sean Powers, chair of marine sciences at the University of South Alabama, trying to determine how many red snapper live in the Gulf of Mexico, and the Dr. Seuss title immediately comes to mind.

Powers is part of a massive two-year effort, funded by the federal government, to conduct a $12 million independent study in hopes of answering the question of every Gulf of Mexico commercial and recreational fisherman — does an abundant number of red snapper live in the Gulf, or has the stock been depleted by overfishing?

The Gulf-wide assessment will include 21 scientists from 12 institutions of higher learning.

“There will also be staff scientists and probably 100-to-200 students to work on this study,” Powers said.

Recreational anglers have faced decreasing season lengths over the last few years, despite seeing signs of a recovering red snapper population with higher catches and bigger fish. The disconnect between what anglers see on the water and the shorter seasons have led some to question the science behind the current stock assessments conducted by the National Marine Fisheries Service.

“The real over-harvesting occurred in the 1980s and the 1990s, but red snapper live to be about 50 years old, and you need a lot of old fish in the population,” Powers said. “All fishermen really want is more days to fish, but that requires the population to be higher than it has been modeled to be in other studies,” Powers said. “We believe the method of this study will give us a more accurate picture of what’s down there. We all agree it’s recovering, but what we’re differing about is how far recovered it is. This should help to determine that.”

“All fishermen really want is more days to fish, but that requires the population to be higher than it has been modeled to be in other studies.”

Powers thinks the study “is going to tell us the population is recovered in some parts of the Gulf and not in other parts, and give us specific locations.

“We have been doing counts for four or five years off Alabama because about 30 percent of the recreational harvest of the Gulf red snapper occurs in our waters,” Powers said. “That’s because we have a lot of off-shore artificial reefs. In fact, we have about 12,000 artificial reefs off the Alabama coast.”

That number is attributed to an Alabama law that lets anyone with $25 for a permit build a private reef. The abundance of artificial reefs off Alabama has allowed Powers to test many of the methods that will be used in the Gulf-wide count of red snapper. The Mississippi-Alabama Sea Grant Consortium, lead agency for the project, selected Powers to lead the project along the Alabama and Mississippi coasts. The National Marine Fisheries Service will participate in a supervisory role.

Powers said his counting method is straightforward. Beginning in March, his team will begin systematically counting the number of red snapper on natural and artificial reefs. The team will include about 12 graduate students and technicians. Instead of divers, a $1 million Remotely Operated Vehicle (ROV) and other mapping equipment, purchased recently by South, will be used to map the reefs.

“Another of the reasons this hasn’t been tried before is the technology just hasn’t been there,” Powers said. “We are fortunate that the University has invested in the modern equipment needed to do this.”

“Everybody is anxious about seeing the results of this study — from congressmen to local fishermen — and it’s going to be scrutinized by all of them, so that’s going to be challenging because a lot of people have a vested interest in what we learn.”