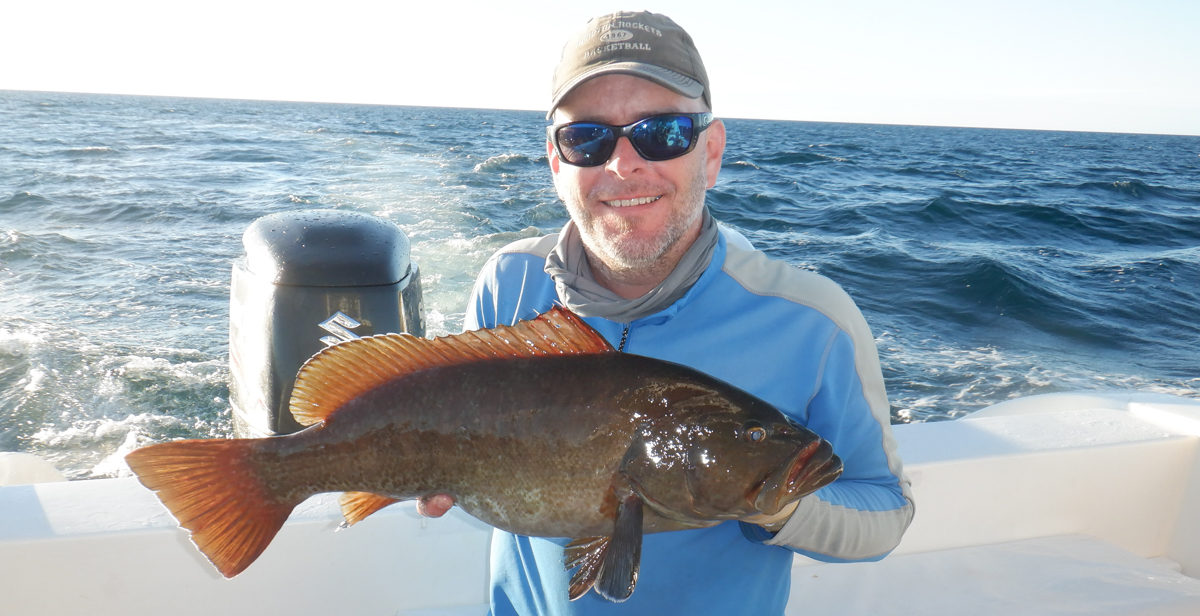 Dr. Ronnie Baker, an assistant professor of marine science at the University of South Alabama, holds a grouper off San Cristobal Island in the Galapagos. When he returns for research, Baker plans aims to identify coastal nursery habitats for fisheries species.

When Dr. Ronnie Baker returns to the Galapagos Islands as part of ongoing research project with the University of South Alabama, he’ll bring along a dozen underwater cameras and a plan for surveying the waters surrounding one of the most remote and unique ecosystems on the planet.

“What I’d like to do is look at the mangrove and other shallow water habitats along the coast,” said Baker, who is also a senior marine scientist at the Dauphin Island Sea Lab. “And get a general baseline of the juvenile fish communities to allow us to detect changes in these communities into the future.”

The research is part of a collaboration with the University of North Carolina and Universidad San Francisco de Quito in Ecuador. Baker is one of seven South researchers who have been awarded grants to explore research opportunities with the Galapagos Science Center.

His made his first trip in 2019. He planned to return this fall, but the coronavirus pandemic interrupted travel. His next chance might come in the spring.

COVID-19 restrictions may have delayed trips to the archipelago for South faculty and students, but they haven’t diminished enthusiasm for the partnership. A USFQ team of engineering students and an instructor recently participated remotely in a USA innovation program as they seek to link disposers of recyclable materials with buyers.

Meanwhile, three South students have worked on research projects with faculty from USFQ. Marie Foret and Aaron Wilson, both honors students, are participating in meaning in life research, surveying USA students to secure a comparison population and offering an opportunity for cross-cultural understanding. Lena Siemers, a December graduate in international studies and foreign languages and literature, assisted on a project focused on human migratory flows from Venezuela to Ecuador.

“When you start these kind of partnerships, you hope they’ll grow into something meaningful and significant,” said Bri Ard, director of international education at South. “With USFQ, we had a great idea and we were able to execute it.”

Alex Rendon, director of operations for the office of international programs at USFQ, said South research fit well with plans for the International Galapagos Science Consortium.

“One of the motivations for inviting USA to join the consortium,” Rendon said, “was the strong capacities in sustainable fisheries and ecotourism that could elevate ongoing activities to higher levels of scholarship and greater global visibility.”

The Ecuador program joins more than 15 South partnerships with colleges around the world. These include exchange programs with the Toulouse Business School in France, Hanyang University in South Korea and Kansai Gaidai University in Japan.

The Galapagos Islands, which are more than 500 miles off the coast of South America, are famous for inspiring Charles Darwin’s theory of evolution during his scientific voyage on the HMS Beagle in 1835. Because of their isolation in the Pacific, the islands have a large number of unique species and are a national park and marine reserve of Ecuador, as well as a UNESCO World Heritage Site.

Dr. Tony Waldrop, president of the University of South Alabama, helped start the Galapagos Science Center when he was vice chancellor of research at the University of North Carolina. The center was founded in 2011 as a hub for research among local, national and international scientists. The focus of work is on interdisciplinary research, education through science and community support. The connection between Waldrop and USFQ administrators led to South joining research in the Galapagos.

“These kinds of relationships are incredibly valuable,” Ard said. “You automatically have university buy-in and support. It’s a bit of a dream.”

Areas of study are fisheries, climatology, oceanography and seismology, along with tourism and hospitality, health-related services, and civil and coastal engineering. In years to come, field work could include graduate assistants and undergraduate students from Mobile.

“This will give our students an opportunity to gain international experience,” Chronister said. “Both in the classroom and in research.”

Right now, South professors are trying to plan their research around the travel restrictions and health concerns of the coronavirus pandemic. “It’s delayed all of the research by about a year,” Chronister said.

In 2015, some of the first scholars from the University joined an international research project in the Galapagos Islands. A pair of South biologists at the time, Dr. Ylenia Chiari and Dr. Scott Glaberman, helped identify a new species of giant tortoise – the Eastern Santa Cruz Tortoise, Chelonoidis porteri.

Baker joined the South faculty two years ago. He was born in the United States, but grew up in Australia and earned his Ph.D. from James Cook University in northeast Queensland. For several years, he did research in Australia and Papua New Guinea. His post-doctorate experience includes work with the National Oceanic and Atmospheric Administration in Galveston, Texas, and the Smithsonian Marine Station in Fort Pierce, Fla.

One of his mentors at the Smithsonian, Dr. Ilka “Candy” Feller, is a world leader in mangrove research and traveled to the Galapagos in 2019.

“What’s she’s found there,” Baker said, “is an incredible mangrove system unlike any other in the world.”

His plans for the Galapagos rely on an underwater camera system developed by one of his former students. Small waterproof devices are much easier to use than bulky equipment from years past. The hard part comes with analyzing all of the data from different cameras at different locations.

Species of snapper and grouper are most valuable to the fishery, but also most vulnerable to overfishing. Ecotourism is an opportunity, but also a concern. One question for national park officials is whether to allow snorkeling at certain mangrove bays.

His research will have an application for island programs with ecological tourism and sustainable fisheries.

“That’s quite appealing,” Baker said. “To be able to work with the national park managers, to have our work tied to their immediate plans.”