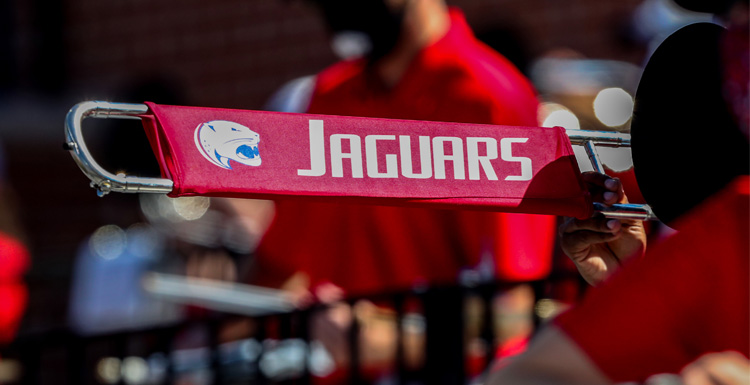 Seven members of the Jaguar Marching Band have been chosen by College Band Directors National Association to participate in a virtual halftime performance at the College Football National Championship game.

The University of South Alabama will be a part of college football’s 2021 national championship game. Not on the field, but virtually.

Seven members of the Jaguar Marching Band will be performing in the College Band Directors National Association Intercollegiate Marching Band. They will join nearly 1,500 performers from 200 bands in 45 states and Puerto Rico, all working together to produce a virtual college marching band show.

“There was a ‘call for performers’ asking for band directors across the country to nominate their students to be a part of something special, something that has never been done before,” said Dr. Jason Rinehart, South’s director of athletic bands and associate professor of music.

Rinehart says he chose the students based on leadership abilities and representation from the various sections in the band. All seven of his nominations were selected to participate.

“I knew that I had selected very strong candidates,” he said. “I'm always saying that the students we have here at South Alabama can stack up against any school in the country, and I was right!”

“After learning about what this experience has to offer, I knew it would be a great opportunity to showcase the talents of not only members of the Jaguar Marching Band, but of musicians around the country that have most likely had their marching season affected due to the ongoing pandemic,” Skinner said.

“This is going to be a historical performance,” said Dr. Mark Spede, president of CBDNA and the director of bands at Clemson University. “In this unusual year when bands have been unable to perform their traditional pregame and halftime shows during college football games, we are pleased to offer this opportunity.”

All band members were required to learn the music, then record and submit a video of themselves performing it. Those videos were edited together into the final product.

“I had a great experience being a part of the virtual band,” French said. “I am looking forward to seeing the final product and witnessing the wide variety of band members come together to create this show.”

COVID-19 has canceled many activities, but the virus allowed people to get creative and expand opportunities for band members across the nation.

“With the creation of this video, hundreds of students have been given the opportunity to perform at one of the nation's most popular sporting events,” Butler said. “That is a pretty special opportunity as a musician.”