Over the holiday break, Jo Bonner got a head start moving into his office as the new president of the University of South Alabama.

Along one wall, there’s a bust of Ronald Reagan and a photograph of John F. Kennedy. Behind a desk are family pictures and campaign memorabilia from his decade in Congress. Ships and planes represent Austal USA and Airbus, two companies he helped land and expand on the Gulf Coast.

Bonner comes from the world of politics, not academia. He’s a nontraditional college administrator. He brings to South a wealth of leadership and management experience, but acknowledges he has much to learn from students, faculty and alumni.

“I know there are people wondering who is this guy and how did he end up being our fourth president,” he said. “Rather than try to pretend to be something I’m not, I’ve found throughout my life that I’ve been most successful when I’ve been myself. I’ve been able to work to build relationships and coalitions with people who have different perspectives, but share the same goals. If you meet me halfway, let’s see what we can do together.” 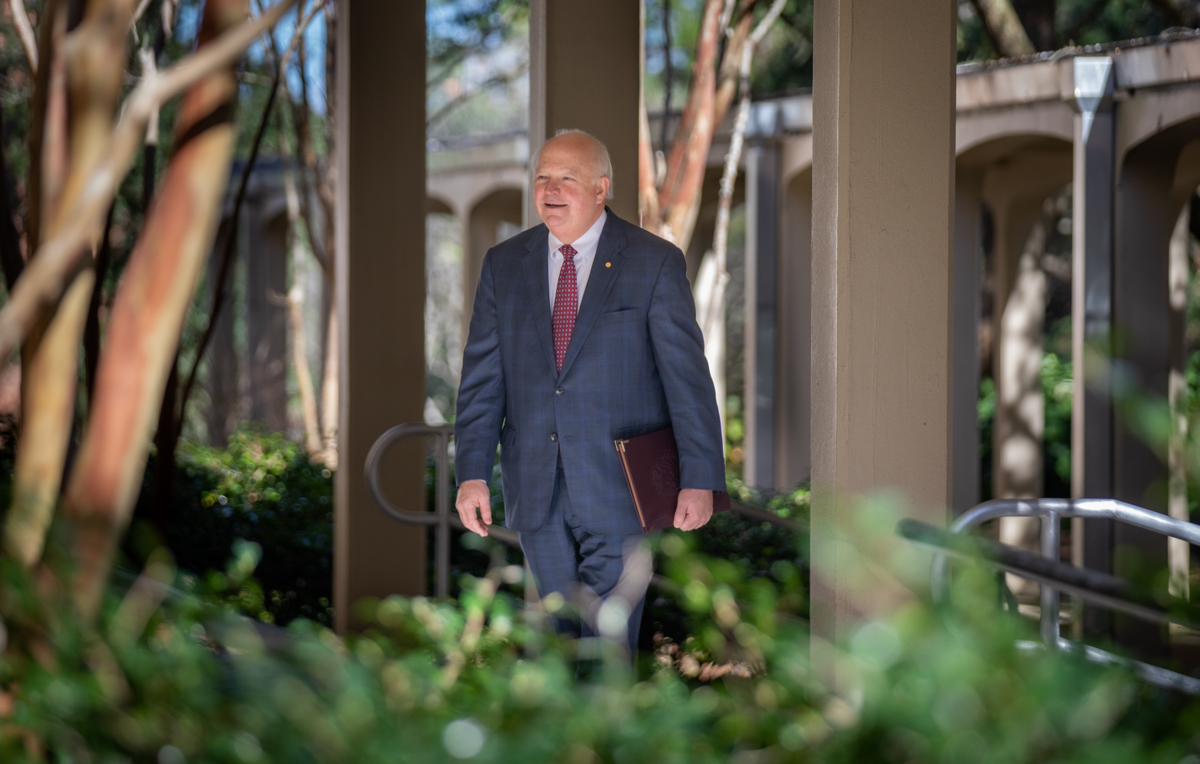 Jo Bonner, the fourth president of the University of South Alabama, outside the Administration Building last week, brings to South a wealth of leadership and management experience.

Bonner, 62, enjoys self-deprecating humor that includes jokes about losing his hair. He’s good with names and personal information about people he’s just met. He knows how to hold a handshake and maintain eye contact with the person speaking to him.

Friends and colleagues describe him as a gifted diplomat and tireless administrator. He’s quick to return phone calls and reply to e-mails. He’s also gracious and considerate, someone known for sending handwritten notes to people on special occasions.

Supporters don’t know anyone with better business and government contacts in Montgomery and Washington, D.C. They can’t imagine anyone with more allies in Mobile.

Bonner spent the last three years as chief of staff to Gov. Kay Ivey. From 2003 to 2013, he represented Alabama’s First District in Congress. Before that, he served on the staff of Congressman Sonny Callahan. Throughout his career, he emphasized community outreach and constituent service.

His local ties include civic groups, service organizations and local schools. As a board member for the Alabama School of Math and Science, Bonner helped raise $13 million for a new science building.

“I just think he has a passion for public service,” said Dr. John Hoyle, the school’s president. “He gets things done. He knows how to get things done.”

Eliska Morgan was deputy chief of staff for Bonner when he was in Congress. She enjoys the gumbo he cooks and the caramel cake he serves at Christmas parties. She admires the way he works a room and connects with people from all walks of life.

“He’s probably one of the most down-to-earth people you’ll ever meet,” Morgan said. “I don’t know how ‘Mr. President’ will go over at the university. He likes to be called Jo.”

Some longtime friends of Bonner were surprised when he applied for the position of president at South. They were less surprised when the USA Board of Trustees selected him for the job in November.

“Once it came about,” Talbot said, “I thought it was such a perfect fit – the right guy at the right time.”

On his second day at South, during an afternoon interview in his office, Bonner joked about moving into the Whiddon Administration Building over the holidays.

“I only triggered the alarm once.  I’m really proud of that,” he said. “But the campus police were very good, very prompt.”

The top shelf behind Bonner’s desk features a display of books and letters about “To Kill a Mockingbird.” Harper Lee’s classic novel about racial injustice was set in Monroeville, Alabama, not far from his hometown of Camden. There was a family connection.

“When I was growing up, we’d go to the beach once a year and stop in Monroeville to visit Miss Alice Lee and her sister, Miss Nelle,” he said. “As a child, I didn’t know her as Harper Lee. I knew her as Miss Nelle.” 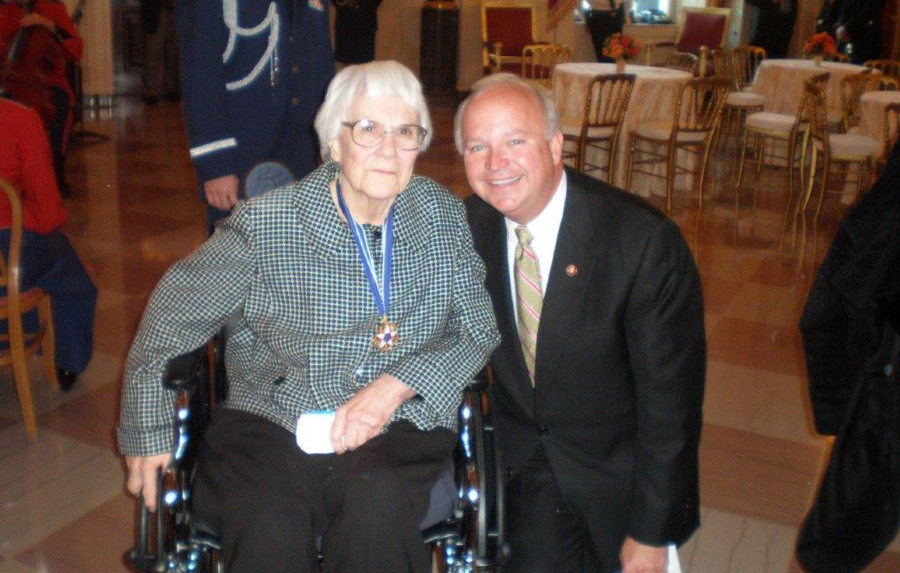 As a congressman, Jo Bonner escorted Harper Lee, author of "To Kill A Mockingbird," to the White House, where she received the Presidential Medal of Freedom.

Bonner remained a lifelong friend and admirer of the famous author, who had her quirks.

“She was sometimes, in her own special way, cantankerous,” he said, “and she didn’t like signing copies of her books.”

That comment sets up one of his favorite stories.

In 2007, while serving in Congress, Bonner escorted Lee to the White House, where she received the Presidential Medal of Freedom.

“We were going down to the state dining room — she was in a wheelchair and I was pushing her — and as we passed the band they played the musical score from the movie of ‘To Kill A Mockingbird,’” he said. “I’m not exaggerating when I tell you that the White House just stopped. Everybody listened to that beautiful introduction to the movie, there were very few dry eyes, and Miss Nelle was one of the ones who was emotionally touched.

“Then one of the Supreme Court justices walked up to me and said, ‘Congressman, do you think Miss Nelle would sign my copy of ‘To Kill A Mockingbird’?’ And I leaned down and said ‘Miss Nelle, the justice brought his copy. What would be your reaction to signing for him?’ And she said, ‘I would be honored.’ Next thing you know there was a receiving line. She must have signed almost 75 books that day, and she was thrilled to be able to do it.”

Family and Career in Alabama

Bonner — the Jo is short for Josiah — grew up in Camden, where his father was a judge. His mother was the one who taught him about handwritten notes.

“My mother always said you can never say thank you too often,” he said. “I still think it’s a nice gesture.”

Bonner’s father taught him the importance of giving people the benefit of the doubt. Those kinds of lessons were cut short when the judge died suddenly of a stroke. His son was 13.

“There hasn’t been a day since that I haven’t wished I had time to ask him one more question,” he said. “But in some ways I think it helped me become a better husband and a better father.”

Bonner has an older brother, Jim, and an older sister, Dr. Judy Bonner, who became a college professor and the first woman to become president of the University of Alabama.

When his mother remarried and they moved to Greenville, Alabama, Bonner had to start fresh at a new high school. He was an A-B student who started a school newspaper, edited the yearbook and became president of the student council.

He went on to the University of Alabama, where he earned a degree in journalism in 1982. He started law school in Tuscaloosa, but left the program to begin work in politics.

Bonner wrote for The Crimson White newspaper. He ran for president of the Student Government Association and also tried out for the school mascot, Big Al. He finished third in both competitions. Bonner ended up working for the SGA president, and the two became lifelong friends.

“I learned the value of not burning bridges,” he said, “and keeping things in perspective.” 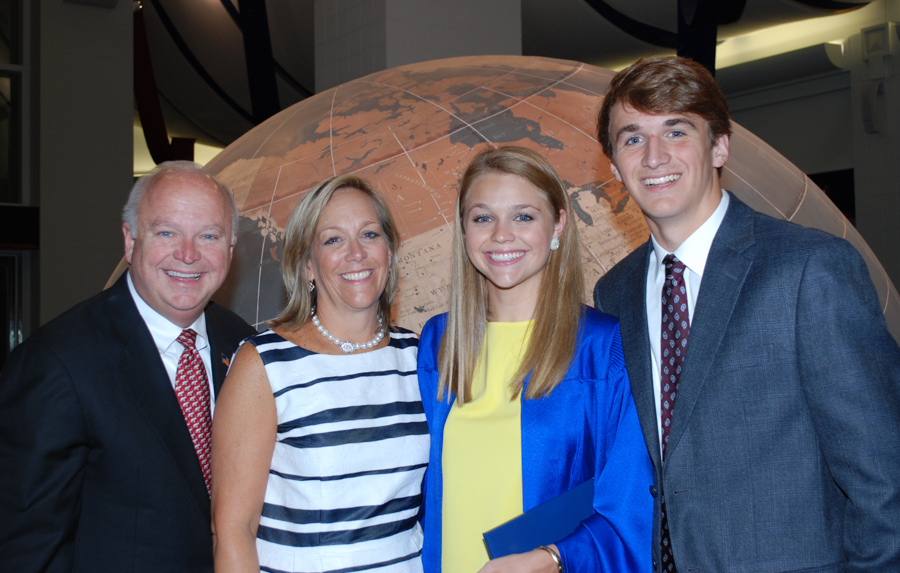 In 2014, the Bonner family — Jo, Janée, Lee and Robins — celebrated Lee Bonner's graduation from St. Paul's Episcopal School at the Mitchell Center on the University of South Alabama campus.

Bonner’s wife Janée, who’s from Mobile, also worked as a congressional staffer in Washington, D.C. They share an appreciation of Alabama politics and life on the Gulf Coast. They were married in 1990.

Their two children grew up in a home near South’s campus, where they played on what is now the band practice field. The family went to Jaguar basketball games at the Mitchell Center.

As a congressman, Bonner often spent Mondays through Thursdays in Washington, D.C., returning to Alabama for long weekends. His wife says cooking helped him relax. His caramel cake recipe was once featured in Mobile Bay Magazine.

“Sunday after church was a big grocery shopping and cooking day,” Janée said. “He would cook meals for the rest of the week. He liked to make old-fashioned things — gumbo, chicken pot pie, country fried steak.”

One of Bonner’s hobbies is collecting political memorabilia. His congressional office was once occupied by JFK, which helps explain his Kennedy photo and campaign pin.

In Washington, he worked on the RESTORE Act that allocated billions of dollars to states along the Gulf of Mexico after the British Petroleum oil spill in 2010. He took pride in his bipartisan work as chairman of the House Committee on Ethics. As its leader, each resolution was passed with unanimous, bi-partisan support.

“That’s not easy to do, but it shows that if you’re willing to work with people — sometimes those who you don’t always see eye-to-eye with on every issue — you can find common ground,” he said.

In 2013, he left Congress to become vice chancellor for economic development at the University of Alabama System. In 2018, he became chief of staff for Gov. Ivey.

Last year, when Bonner learned Dr. Tony Waldrop had resigned as president at South, he thought nothing of it. When people called to suggest he toss his hat in the ring, he laughed. After more than a dozen calls, he stopped laughing and started thinking seriously about a future with the University.

“There’s a void from Panama City to New Orleans that the University of South Alabama is filling, but we could take it to the next level,” he said. “In many ways, my job is to build on the success of others and make certain more people know about us, and how incredible our faculty are, and our tie-in with USA Health. Not just prospective students, but our friends in Montgomery and Washington, and people in the private sector and industry.”