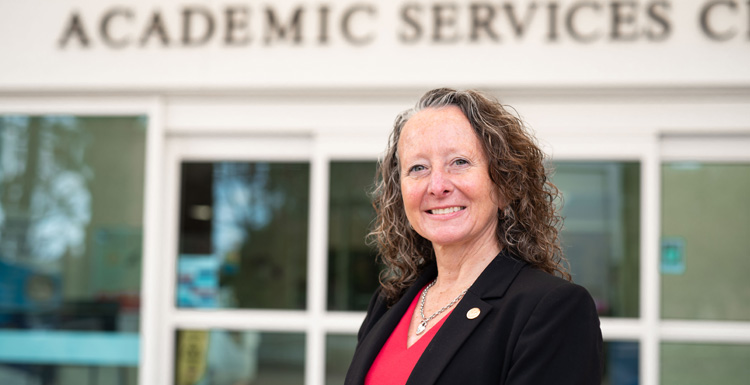 Dr. Nicole T. Carr , associate vice president of student academic success and associate professor of sociology, will be recognized by the National Resource Center for her work as a first-year student advocate.

Freshman retention at the University of South Alabama has increased by 20 percent the past decade, and the work done by the office of Student Academic Success to keep students on track is being recognized.

She will be honored at the organization’s 40th Annual Conference on The First-Year Experience held virtually Feb. 15-19.

“I was thrilled,” said Carr, associate vice president for student academic success and associate professor of sociology. “Many, many individuals and offices have worked very hard to remove barriers for students, to improve their experience in and out of the classroom, and to make South a campus where all students can meet their educational and career goals.”

Entering college is a major change in a young person’s life. Being away from home for the first time, navigating campus and developing adequate study habits are hurdles that can be overwhelming.

“The student’s first year at college or university is critical because it sets the stage for many other habits and practices,” Carr said. “Our work on year one improves student performance for the following years. It also underscores the importance of maintaining that focus on success from year two through graduation.”

Student Academic Success has evolved and grown over time. Initially, a committee was formed to review data and then make recommendations for action. That committee has expanded from 10 to more than 23 representatives from across campus facilitating ways for students to learn and better understand all aspects of the college experience and the requirements for success.

“While student success needs to be owned by one person, it takes significant, unrelenting, commitment by a collective group of people to improve outcomes over the long term,” Carr said. “When we put students - their success and engagement - at the center of our work, everything else will follow.”

After a decade of success, the proof is in the data. In the fall of 2009, South’s freshmen retention rate was 65-percent, it has since reached a high of 78-percent. Retention rate measures the percentage of students in a cohort who advance to the next year. The number of freshmen receiving degrees within four years has increased at an even greater rate.

“I strongly stand by the statement that anyone we admit to South can graduate from South,” Carr said. “If you believe that you can develop your intelligence – that intelligence can be grown – then you can learn new and challenging things, even things you may have struggled with in the past.”