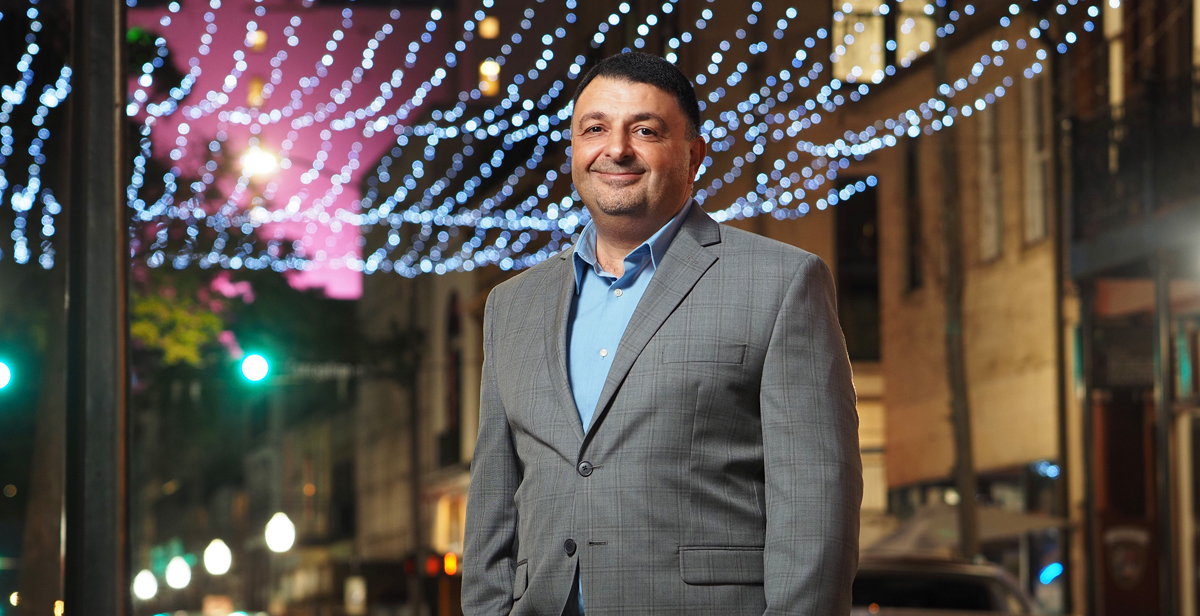 Dr. Khaldoon Nusair, the new department chair for Hospitality and Tourism Management at the University of South Alabama, said the future of South's program includes specializations in the major. Here, Nusair stands in the middle of downtown Mobile's entertainment district – a popular draw for both locals and tourists with restaurants, music and event venues, and lodging.

Dr. Khaldoon Nusair, the new department head for Hospitality and Tourism Management at the University of South Alabama, made his reputation as one of the most-cited marketing scholars in the world.

He taught and did research in the Rosen College of Hospitality Management at the University of Central Florida, one of the largest programs in the country. After eight years in Orlando, Nusair spent eight years at Sultan Qaboos University in Oman, where he was chair of the marketing department and then assistant dean for postgraduate studies and research.

Now he’s back in the United States, seeking a niche for Hospitality and Tourism at South.

“We have to find a gap in the market with specializations in the major,” Nusair said. “Golf management, destination management, and digital marketing and analytics, these are some of the things we’re looking into. The opportunity is absolutely there. And we have the support of the administration, which is very important.

“I can see where we find our way and position ourselves. We’re working on offering a high-flexibility program for students with two-year degrees, students who are already working and want to advance with a four-year degree. We’re looking to attract 20 to 30 students a year with that program.”

The tourism industry was flattened by the worldwide coronavirus pandemic, but pent-up enthusiasm for travel has increased during the last year. Hotels and resorts want to meet demand and build interest. Smart growth is one of the goals in tourism management.

The U.S. economy is projected to add 8.3 million jobs from 2021 to 2031, according to the Bureau of Labor Statistics. Of those, 1.9 million jobs—23.1 percent of all new jobs projected—are expected to be in leisure and hospitality.

“This represents an opportunity to promote businesses and destinations,” Nusair said. “I know that Visit Mobile is working to develop a strategic plan. It’s the right time. We’re coming back.”

Dr. John Kovaleski, interim dean for the College of Education and Professional Studies, is looking forward to new leadership for tourism management at South.

“We’re excited to welcome Dr. Khal Nusair as professor and chair of the department of hospitality and tourism management,” Kovaleski said. “He is recognized as an enthusiastic researcher and teacher-educator who is making considerable contributions to academia through his teaching, published research, and grant and service activities.

Goals for a Goalie

During his first week of the spring semester, Nusair was still in the process of moving into his office. The wall of bookshelves behind his desk was bare except for a textbook, “Digital Marketing,” the first class he will teach at South. “I’ll have more next week,” he said, laughing.

Nusair is a native of Jordan who earned his Ph.D. at Ohio State University. He became a U.S. citizen while teaching at the University of Central Florida. He and his wife, a pharmacist, have three children. When he isn’t working, Nusair is a movie buff – anything with Al Pacino – and a soccer fan. He’s already looking forward to 2026, when the U.S. hosts the FIFA World Cup.

He grew up playing soccer in Jordan.

“I was a goalie,” he said. “I liked taking risks and I did whatever it took to protect the goal.”

After earning an undergraduate degree in administrative sciences from Yarmouk University in Jordan, Nusair completed two master’s degree programs at State University of New York, Stony Brook –  one in technological systems management and the second in management and policy. After working for a few years in the IT industry, he returned to college and earned his Ph.D. in hospitality management.

Nusair said he struggled at first in his Ohio State doctoral program. He didn’t appreciate the value of academic research and scholarly publications. His professors emphasized how important it was to his career.

“This was a turning point,” he said. “But I’m the kind of individual where pressure works for me.”

Upon graduation, Nusair landed a job at the University of Central Florida. He became one of the most published and cited researchers on campus, and he remains recognized today for his body of work. A Stanford study listed him among the top 2 percent of marketing scholars in the world for the last two consecutive years.

After several years in Florida, he accepted a faculty position in Oman. He wanted his young children to grow up closer to family in Jordan. He enjoyed a new challenge at Sultan Qaboos University.

In Oman, he won awards for his teaching and research. He helped Sultan Qaboos become the first public university in the Middle East to be recognized as an accredited member of the European Quality Improvement System.

With their children getting ready for college, Nusair and his wife decided to return to the United States. The opportunity at South appealed to him.

Nusair and professors in the department are collecting data and studying the market for tourism management degrees in Alabama and along the Gulf Coast. He has a 10-point list of things to focus on during the spring semester. These include everything from class schedules and transfer plans to flex initiatives and certification programs.

Nusair likes the idea of choosing a direction and building a program at South.

“When I take a look at this program, and study the area,” he said, “I think there’s much to be done to improve the quality, the enrollment, and our study plan. This is what’s at the top of our priority list.”