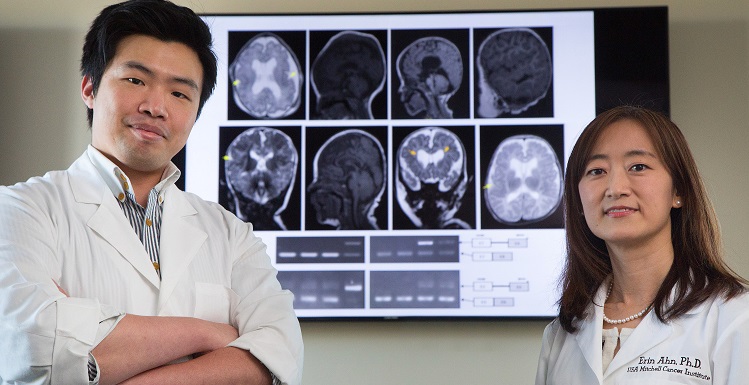 Dr. Jung-Hyun Kim, Ph.D., left, a post-doctoral fellow, and Dr. Erin Ahn, Ph.D., associate professor of Oncologic Sciences at the University of South Alabama Mitchell Cancer Institute, collected and analyzed the clinical features of 20 unrelated patients who shared a developmental delay and intellectual disability, and narrowed down which genes are closely related to brain development.

After studying leukemia, cancer researchers at the University of South Alabama Mitchell Cancer Institute confirmed that a mutation in a gene called SON leads to a neurodevelopmental disorder that produces intellectual disability, impaired vision and facial abnormalities in children.

The new syndrome, ZTTKS, now bears the initial of one of the MCI researchers, Dr. Jung-Hyun Kim, Ph.D., a post-doctoral fellow in the lab of Dr. Erin Ahn, Ph.D., associate professor of oncologic sciences. Their research confirmed that SON is a “master regulator” governing neurodevelopment, and that a mutation in the gene can result in ZTTKS.

“Identifying a previously unknown cause for a syndrome and having that syndrome named after a team member in your laboratory is quite an accomplishment, said Laurie Owen, Ph.D., MCI associate director for Basic and Translational Sciences.

For the Posey family of Beacon, N.Y., identifying the cause of their young daughter’s disability puts a stop to the endless searching for a diagnosis. “This means everything,” said Pamela Posey, mother of 3-year-old Emma. “I’ve already shared the papers with our doctors so they can better treat Emma.”

Emma attends a special-needs preschool with her twin sister, Ella, who has not been diagnosed with ZTTKS. “I was told that perhaps she could catch up with other kids her age,” Posey said. “Now I know that this may not be the case.”

While there’s no “cure” for ZTTKS, identifying its cause can help doctors predict future medical issues for Emma and allow the Poseys to connect with families facing a similar diagnosis. Posey has created a Facebook page to do just that. “It’s very new, and we’re all looking forward to getting to know each other,” she said.

As a cancer researcher, Ahn had discovered that a shortened version of the SON gene was linked to leukemia, a discovery that was published in the prestigious journal Molecular Cell this past spring. Ahn had studied the SON gene since 2004, when she was a post-doctoral fellow at the University of California San Diego. She came to MCI in 2012, and Kim joined her lab in 2013.

The new discovery occurred after a clinician at Valley Children’s Hospital in Madera, Calif., and the clinical genomics team at Ambry Genetics near Irvine, Calif., reached out to Ahn because of her past work with SON. Using DNA sequencing technology, the physician at Valley, together with Ambry, had discovered a mutation in the SON gene of a 5-year-old girl with developmental disabilities. The mutation, they found, had not been inherited from her parents.

Owen said that Ahn and Kim’s work illustrates the importance of conducting basic scientific research, following where it leads, and ultimately applying it in a health-care setting.  “The ZTTKS story underscores the inherent value of basic cancer research being applied to solve an unrelated problem related to the underlying molecular basis for a neurodevelopmental disorder in children,” said Owen.

Ahn and Kim collected and analyzed the clinical features of 20 unrelated patients who shared the developmental delay and intellectual disability. They isolated white blood cells from blood samples taken from patients and their parents, and further isolated RNA to confirm a problem with RNA editing in the cells. “The goal was to narrow down which genes are closely related to brain development,” Ahn said. “A lot of these genes are downstream targets of the SON gene.”

Ahn and her lab discovered that SON plays a key role in the way a cell translates DNA into protein – in particular, RNA splicing, or editing. She explains it this way: If there’s a mutation in the SON gene, the ensuing SON protein can become compromised and cause mistakes in RNA editing.

Ahn and Kim also confirmed the findings by repeating Ahn’s previous studies with zebrafish, a freshwater fish with regenerative abilities that is often used in scientific research. They confirmed that SON mutations produced developmental problems in the fish: When injected with genetic materials that reduced SON levels, some zebrafish developed with bent tails; others had severe brain malformations. The problems mimicked the clinical features observed in the patients, which meant that the researchers had connected the dots from a SON mutation to the neurodevelopmental disorder.

Ahn and Kim collaborated with clinicians, genetic counselors and clinical genomics scientists from all over the U.S. and Europe, including the U.K., the Netherlands, Germany and Austria, to publish their findings. “In research, you can never predict where the experimental results are ultimately going to take you,” said Owen. “But the real magic happens when you have researchers who are thinking outside the box, willing to collaborate across disciplines, communicate openly, and share data—that is the essence of team science.”

The MCI research encompassed 20 unrelated patients. All of the patients had delayed language development, learning disabilities and facial abnormalities, including low-set ears, deep-set eyes, horizontal eyebrows and a depressed nose bridge. Brain MRI tests revealed other irregularities. Some of the children suffered from seizures. Others had scoliosis or vision problems.

Eventually, four separate academic groups published on the subject, spurring the four-initial name for the new syndrome. Kim and Ahn’s article in the September 2016 issue of The American Journal of Human Genetics documented how many patients presented with unusual facial features, visual problems, a loss of white matter shown in brain imaging and musculoskeletal abnormalities.  Among the four publications, Kim and Ahn’s article was the only one to describe the underlying molecular mechanisms and animal models.

Dr. Richard Myers, Ph.D., president of the HudsonAlpha Institute for Biotechnology in Huntsville, one of the collaborators on the research, estimated that 30 million people suffer from rare diseases, the majority of which have no known cause.  HudsonAlpha is a nonprofit research, teaching and clinical institute.

Now that the human genome can be sequenced, Myers said, scientists and physicians are able to pinpoint a genetic cause in many cases. “One reason why this is so exciting is that we couldn’t do this four or five years ago,” he said. “We really are entering a new era of genomic medicine.”

The Poseys were planning to travel to Walter Reed Medical Center in late January to meet with genetic experts and learn more about Emma’s condition. “I hope that with all that we now know, that we can anticipate any concerns for her,” Posey said. “Throughout all of her medical issues, she remains a bubbly, affectionate girl,” she said.