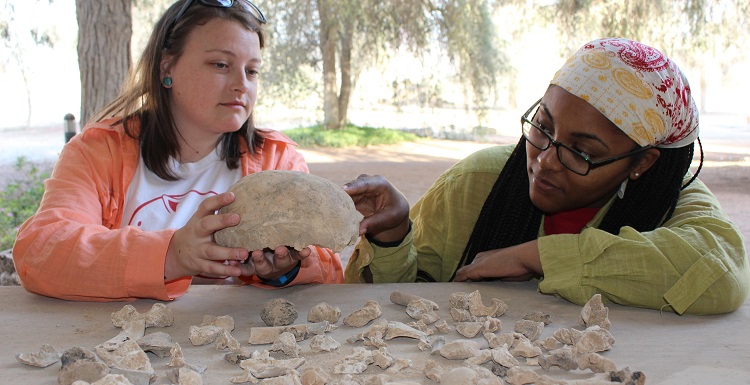 Junior anthropology majors Shaunna Goetz, left, and Antonia Carter recently visited the Emirate of Ras al-Khaimah in the United Arab Emirates to do preliminary research on ancient bones, which have since been sent to South for a long-term study.

University of South Alabama bioarchaeologist Dr. Lesley Gregoricka and two of her students made history last month during a research trip to the Arabian Gulf.

For only the second time in the United Arab Emirates’ history, ancient bones have been loaned to an American university, and this time it is for a long-term anthropological study at the University of South Alabama.

The trio were also part of the first all-female team of bioarchaeologists to work in the Emirate of Ras al-Khaimah as they began studies on bones from the Early Bronze Age.

His Highness Sheikh Saud bin Saqr al-Qasimi, Ruler of the Emirate of Ras al-Khaimah and member of the Federal Supreme Council of the UAE, invited the team to the palace to speak with him. “He was excited to meet with us to learn about our team and our research there,” said Gregoricka, an assistant professor of anthropology. “He asked many questions about what we were doing, and spoke with us for over an hour on our work and his own experiences in America, where he did his university degree.”

South students Shaunna Goetz and Antonia Carter, both junior anthropology majors, accompanied Gregoricka as research assistants. Rounding out the team was Dr. Jaime Ullinger, a long-time professional colleague of Gregoricka’s from Quinnipiac University and co-director on the project, and two of her female students.

Due to the support of Christian Velde, resident archaeologist at the local Department of Antiquities and Museums, Sheikh Saud gave the final approval for Gregoricka to ship the bones to South as part of a 15-year study “to determine lifeways of the past – the ways in which people lived and died,” Gregoricka explained. “The best way to do that is to study these skeletons so that we can learn about what these people ate, the diseases they may have had, and how they adapted to their surroundings.”

The bones had been excavated decades ago from two 4,200-year-old tombs and stored in boxes in the department’s storage facility until professionals could study them. Gregoricka said about 450 people had been buried in each tomb.

For the duration of their field season, the team stayed in a government-sponsored guesthouse that catered to visiting researchers. Shortly after their arrival, they picked up the bones from the department’s storage facility. Then, each day they worked outside with December temperatures in the low to mid 80s, frequently fighting off mosquitos during early morning and late evenings.

“We took the bags out of the boxes, removed the bones from these bags, and separated the smaller pieces from the larger fragments with identifiable features suitable for research,” Gregoricka said. “These were the fragments that we selected for transportation back to the United States.”

Gregoricka said she was extremely proud of Goetz and Carter for their hard work on site and their great attitudes. She said they also managed to enjoy a bit of local culture while there, visiting a desert camp where they rode camels and ate local cuisine.

One of the toughest parts of the trip was packing the bones for shipment to South. When shipped, each large metal container weighed at least 130 pounds. And, to her surprise, the bones arrived at her campus office just five days after she returned home. They are now in storage, awaiting renovations in her research space in the Center for Archaeological Studies.

“The bones will be stored inside metal scientific cabinets, and the ongoing curation of this material will allow research to be conducted on these human remains,” Gregoricka said.

For the next 15 years, the bones will be the focus of her research.

“This is something I’ve been thinking about doing since graduate school,” she said.

Her plans include applying for a National Science Foundation-Research Experience for Undergraduates (NSF-REU) grant that will fund undergraduate research on these collections, and she hopes to include South students as well as students from other universities.

“This is really going to be a long-term project,” she added.

Goetz said it’s that type of dedication that she admires the most about her work with Gregoricka.

“I hope to follow in Dr. G’s footsteps because she’s a great mentor and role model. All the things that she does only makes me want to be more like her in my future career,” she said.

Goetz, who plans to graduate in spring 2018, hopes to earn a Ph.D. in anthropology, then teach at the university level.

Fellow student Carter, 20, said the UAE trip also reinforced her intention to study for a doctorate in anthropology.

“Overall, it was a learning moment because I learned a lot about the process when you dig up human remains, how they are to be processed and labeled,” the junior said. “It was the first time I’d done field work, but I know for certain I want to continue with my plans to be a biological anthropologist. I definitely want to work with bones for my career.”