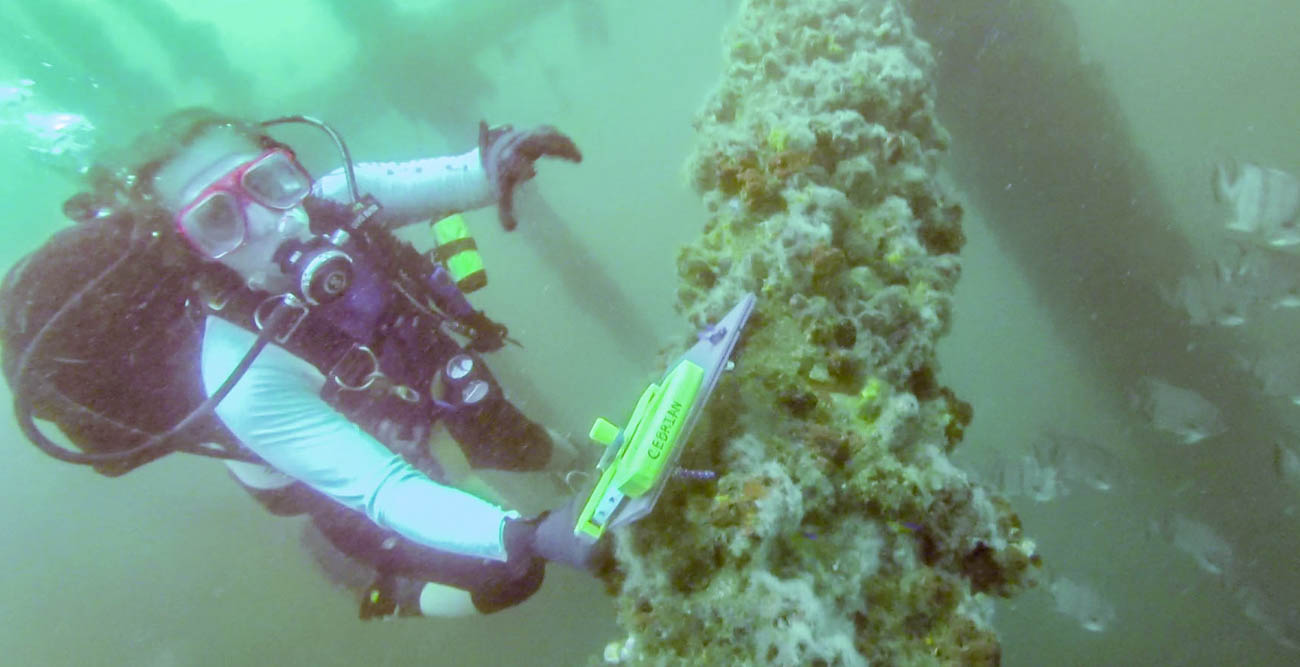 Jessica Gwinn, a Ph.D. student at South, samples herbivorous fish and algae on a rig south of Dauphin Island in July 2018. Gwinn's work was part of an international research project of ciguatera led by the University of South Alabama.

A University of South Alabama marine scientist is leading a wide network of collaborators to learn more about the world’s most prevalent seafood-toxin illness, a microorganism that, while unknown to many Americans, is a major concern as close as the Gulf of Mexico.

The illness is ciguatera (sig-wuh-TAIR-uh) poisoning. It’s caused by eating fish or invertebrates such as shellfish, contaminated by ciguatoxins that originate in marine algae living on seagrass, rubble and other underwater surfaces. Ciguatera can cause gastrointestinal distress, dizziness, numbness, muscular and bone pain, itching of the hands and feet, and a reversal of normal perceptions of hot and cold, among other debilitating issues. Symptoms can linger for weeks, months and even years. There’s no effective treatment currently available. 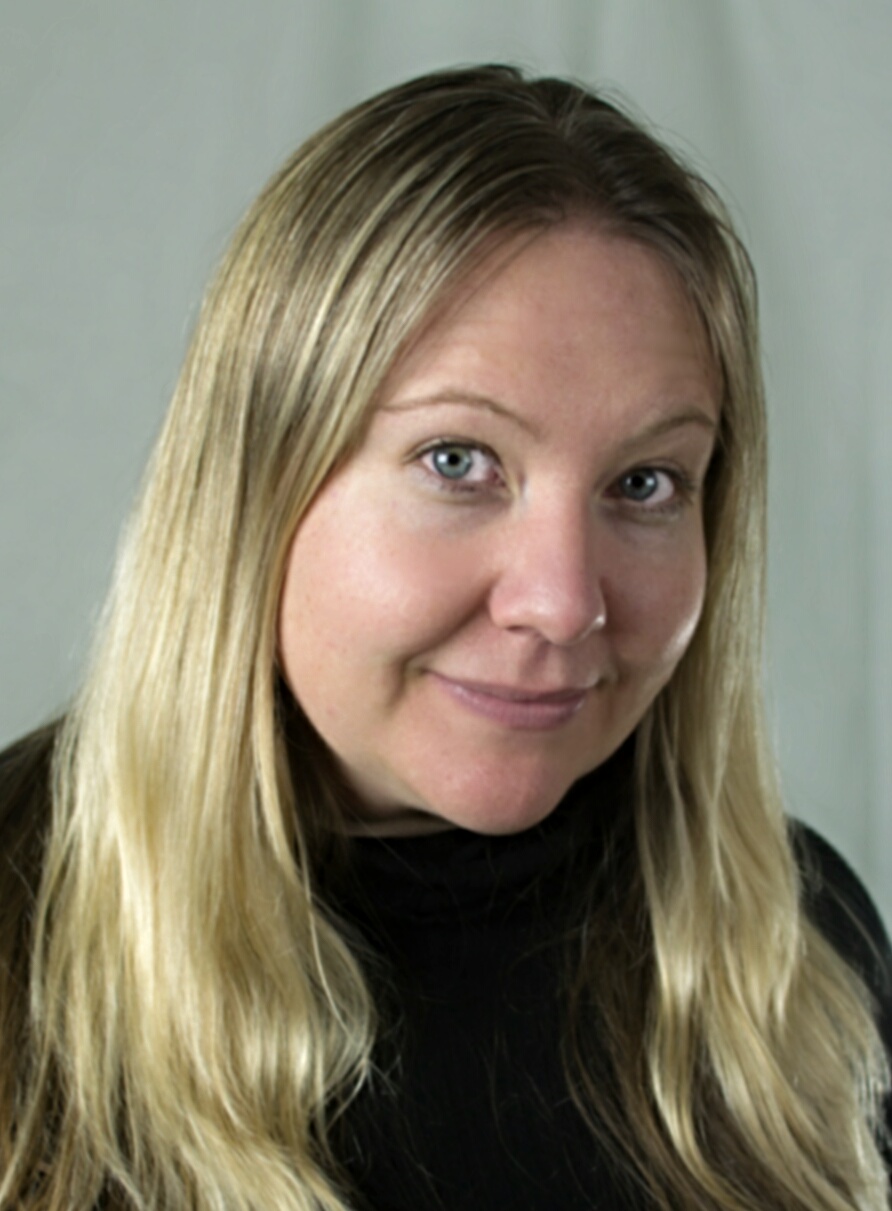 The toxins cannot be easily detected; they have no taste or smell. Cooking fish contaminated with ciguatera toxins doesn’t affect it. In tropical and subtropical regions around the world, it may poison hundreds of thousands of people per year. Most cases go unreported, so it’s impossible to say exactly how many people may be affected. With the global nature of today’s seafood industry, ciguatera is not just a problem in coastal communities anymore. Significant outbreaks can and have occurred in temperate regions such as New York, Germany, the United Kingdom and France, originating in fish harvested and imported from affected regions.

Dr. Alison Robertson, an assistant professor at the University and a senior marine scientist at the Dauphin Island Sea Lab, is leading the international project to study ciguatera, funded by the Partnerships for International Research and Education program, or PIRE, from the National Science Foundation. The five-year effort, which began in September 2017, involves educators and scientists from around the United States, as well as Norway, Canada, Hong Kong, Cuba, Australia and the United Kingdom, and has expanded to include new partners from Italy, France, Spain, New Zealand and Belize.

The researchers want to learn about the environmental conditions that affect the production of the toxins, and determine how the toxins change as they move through the food web and their fate in the environment. Through international partnerships, the scientists hope to identify new toxins and develop better, faster and cheaper tests for detecting the toxins in fish before they reach consumers. They are also working to better predict the amount of toxin present on reefs and its incidence in coastal communities.

Researchers want to learn about the environmental conditions that affect the production of the toxins, and determine how the toxins change as they move through the food web and their fate in the environment.

The team also has educational outreach underway. They are working with communities to take advantage of local knowledge and implement better communication strategies about the risk of ciguatera. Robertson said the project also promotes science education by emphasizing multidisciplinary science and taking the intimidation away from asking questions that involve math and chemistry. “As soon as you add coral reefs and fishes into the equations, the complexity can be visualized and students are no longer intimidated by it.”

Despite the nasty potential of this particular genus, Robertson loves algae. “Algae are the most important thing in the ocean, if not the planet, because they produce 65 to 70 percent of the world’s oxygen and as the primary producers in the ocean, support all marine life,” she said. “So really, algae are the good guys. There’s just this 1 percent of them that tend to cause problems for people. Or for fish.”

“Algae are the good guys. There’s just this 1 percent of them that tend to cause problems.”

The threat to people stems from the biotransformation of the toxins as they move from algae into various invertebrates and fish. “We’re trying to understand the tipping point,” she said. “At what point do these chemical conversions modify these toxins to a place where we can more easily detect them and give a better estimate of occurrence in a given region? This will aid in the development of better management strategies that could reduce the incidence of this disease in coastal communities.”

Learning how that biotransformation process works could lead to a method for detecting the toxins so people could know what fish not to eat. For now, Robertson suggests that unless you have a local fisher with a strong traditional knowledge of ciguatera, avoid even small apex predators such as barracuda, king mackerel, grouper and Spanish mackerel from areas where ciguatera is known to be prevalent. “Partnerships with fishermen and other local stakeholders from all over the world have greatly enhanced our research and knowledge of ciguatera, and there are safe fishing zones even in the areas of highest concern, if you know where to look and which fish to catch.”

Ciguatera poisoning largely affects low socioeconomic groups in remote island communities who rely on local seafood for subsistence. The troublesome algae prefer very salty water; they’ve not been found in Mobile Bay but are present on offshore platforms, artificial reefs and oil rigs just off the coast of Alabama that provide surfaces where they can live.

“In the U.S. Virgin Islands, for instance, we have partnered with epidemiologists who have reported that approximately 12 percent of the population is affected by ciguatera every year,” Robertson said. “That’s about 4,500 people a year.

“But also, it might only be 45 to 100 people a year that actually go to a doctor. because In areas where they know about ciguatera, they also know that there’s no effective treatment aside from time.”

“In the U.S. Virgin Islands ... approximately 12 percent of the population is affected by ciguatera every year. That’s about 4,500 people.”

Even diagnosing ciguatera is difficult and at present involves a physician linking symptoms to recent consumption of reef fish, which can be problematic since many symptoms are quite general. Identifying the toxin currently requires a well-equipped lab. “Our hope is that we can come up with a diagnostic tool by identifying characteristic biomarkers of toxin exposure,” Robertson said.

The northern Gulf of Mexico has a very low prevalence of ciguatera at present. However, with the steady warming of ocean waters there is a migration of species from tropical to temperate zones, and along with that the possible expansion of ciguatera. “We want to have something in place to protect consumers, commercial and recreational fishermen, and subsistence harvesters before this becomes a significant problem here — because people rely on seafood.”

The project has forged partnerships around the world, including a graduate student exchange program. “Our students can have an opportunity to work overseas in a partner’s lab for three to six months at a time and gain experience from them and access to their facilities and instrumentation, which is quite different from ours,” Robertson said. “And likewise, students from their labs can come and be hosted in our labs in the U.S.”

As part of the project, the Dauphin Island Sea Lab hosts workshops for middle school science teachers each summer. “The goal is to emphasize cross-disciplinary science and to try to take away the intimidation of chemistry,” Robertson said. “Teachers and students can think chemistry is too hard or that they can’t do it. Likewise for math. And everything we do in marine science requires math or statistics to determine the significance of the complex relationship between organisms.”

The researchers have also partnered with education specialists who have been developing classroom activities and visiting middle schools to directly engage students, including children with impaired vision or hearing. “That was hugely successful,” Robertson said. “We are lucky to have Dr. Carla Curran from Savannah State University involved in helping us bring some of this science into the classroom and to underserved kids.”

The involvement of student researchers, the student exchange program, the teacher workshops and the classroom work with students all have an overarching goal that goes well beyond teasing out the secrets of ciguatera poisoning. It’s a deceptively simple target with tremendous promise for a better future.

“We’re really hoping,” Robertson said, “to develop a strong network of new young scientists that will lead the way.”

CiguaPIRE has paid internships available every year. Summer 2019 applications will be taken through March 15. College seniors or recent Bachelor of Science graduates can help with both lab work and field work/sample collection. For information, visit the website of the Dauphin Island Sea Lab.

Starting in 2019, a field class in the chemical ecology of tropical ecosystems will be held at an international location and support up to 16 undergraduate seniors and graduate students. Scholarships available. Applications for 2019 close Feb 22.