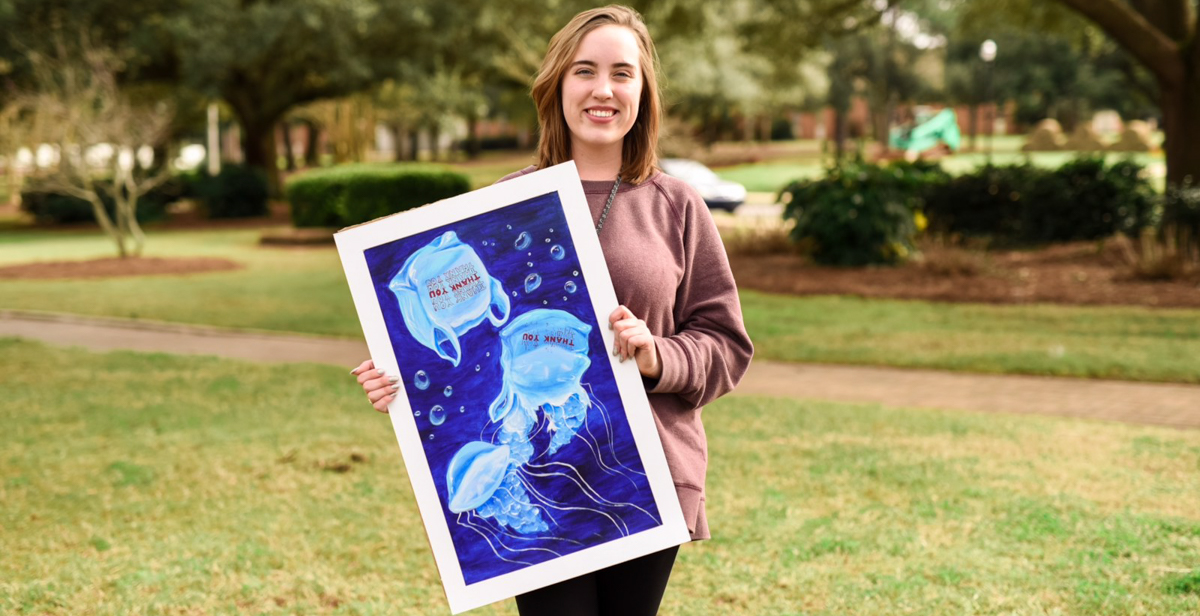 Grace Richardson, a University of South Alabama freshman from Hoover, holds a painting that was part of her Project Aquarius campaign. She earned the Girl Scouts' Gold Award as a result of her work.

Grace Richardson, a University of South Alabama freshman, has won a Girl Scout Gold Award for the art work and environmental advocacy she combined in a high school campaign called “Project Aquarius.”

The 19-year-old from Hoover was inspired by a ninth-grade visit to the Dauphin Island Sea Lab, a research and educational facility comprised of institutions including the University of South Alabama. She did paintings, created a website and spoke to community groups about ocean conservation.

“My thing is the Girl Scouts and art,” Richardson said. “I wanted to do something big with that.”

“Project Aquarius” wound up winning the Girl Scouts’ highest honor, which was announced this month.

“By earning the Gold Award, Grace has become a community leader,” said Karen Peterlin, chief executive officer of the Girl Scouts of North-Central Alabama. “Her accomplishments reflect leadership and citizenship skills that set her apart.”

Richardson chose to study art at South Alabama because of its animation program. Her dream is to work at Disney on the kind of animated movies she loved growing up. She’s seen her favorite films dozens and dozens of times.

“‘Tangled’ – ‘Tangled’ is my favorite,” she said. “And ‘Treasure Planet.’ Nobody knows that one, but it’s one of my favorites, too.”

Richardson’s website welcomes visitors with a beach close-up and simple slogan: “The ocean needs you.”

A gallery of paintings offers titles such as “Red Tide,” “Bleached Reef” and “Plastic Jelly.” A section called “What You Can Do” recommends that people conserve water, refuse plastics and consume sustainably fished or farmed seafood. There are links to green retailers and marine advocacy groups.

At her high school, Richardson recruited fellow students to help paint an ocean mural on a cafeteria wall, which wasn’t even part of her project. At her church, she turned a gallery opening into an environmental program, convincing elders to stop using Styrofoam products.

At South, she keeps busy with classes and activities with the Alpha Gamma Delta sorority. She enjoys spending time around the courtyard of the Visual Arts Building. She likes living near the Gulf Coast.

This summer, Richardson will return to the Girl Scouts as a camp counselor. She’s known many of her scouting friends since they were in kindergarten. She’s a lifetime Girl Scout member.

“Project Aquarius” might not be her last attempt at art and activism. She isn’t sure where her career will lead.

“Animation is storytelling for all ages,” Richardson said. “You see it all the time in small ways.”