Living in a 'Landscape of Commemoration' 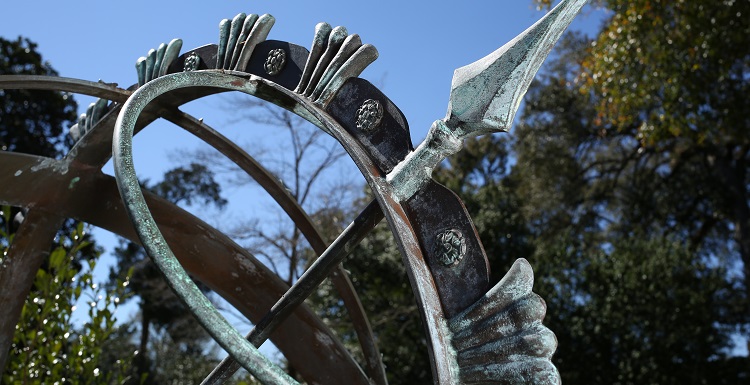 This sculpture on the campus of Spring Hill College honors U.S. Army soldier Stephen E. Karopczyc, a member of the Class of 1965, who was killed in Vietnam. The memorial is one of many featured in the 'War and Remembrance on the Alabama Gulf Coast' on display at South's Marx Library.

Photographs, books and rare personal artifacts from soldiers highlight the moving exhibit “War and Remembrance on the Alabama Gulf Coast,” from the Center for the Study of War & Memory at the University of South Alabama.

The displays in the Mary Elizabeth and Charles Bernard Rodning Gallery of Art, located on the third floor of the USA Marx Library, will continue through Feb. 28 during normal library hours. For the remainder of the year, it will travel to at least three other locations in the area.

Dr. Steve Trout and Dr. Susan McCready, co-directors of the center, developed the installation “as a way to reach out to the general public to explain and to show what the Center does,” McCready said. The Center has sponsored seminars and lectures, but this is its first exhibit.

“Our research students set out to locate as many war memorials as possible in the area, and they came up with some we were surprised to find,” McCready said. “This really shows the public that we live in a landscape of commemoration.”

Three students participated in the search for the exhibit’s sites and material.

“I went around scouting out sites, and the idea was to find as many of them as possible, and I was surprised how many there are that most people don’t know about,” said Cynthia Rush, a graduate student in English.

In the exhibit, panels of photographs and words highlight several specific war commemorations, such as one at Spring Hill College that honors U.S. Army soldier Stephen E. Karopczyc, a member of the Class of 1965, who was killed in Vietnam. Twenty years later, his classmates dedicated the monument honoring the Congressional Medal of Honor recipient.

The exhibit uses many letters and photos from the University’s Doy Leale McCall Rare Book and Manuscript Library.

“We’re excited by all the great partnerships, such as the one with the McCall Library, that have developed with the Center,” McCready said. “We’re all interested in some of the same things, and that’s about fostering an appreciation about the humanities, history and for what we do.”

On March 6, the exhibit will open at the Fairhope Public Library. The Ben May Library downtown on Government Street will host it beginning May 2. And, visitors to the USS Alabama Battleship Memorial Park may view it July 3 through the end of December.