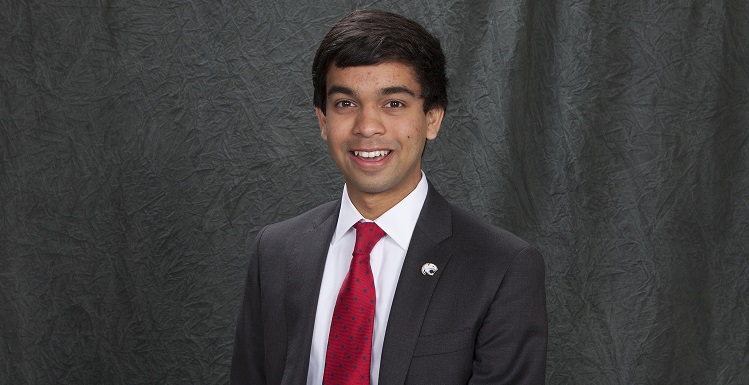 Ravi Rajendra is a senior biology major from Montgomery. He plans to attend medical school after earning his degree.

Former University of South Alabama Student Government Association President Ravi Rajendra has received the Future Leader Award from the National Association of Student Personnel Administrators. USA is a member of the Alabama Chapter of NASPA.

Rajendra, a senior biology major from Montgomery, was nominated for this award by Dr. Krista Harrell, associate dean of students and Title IX coordinator.

“I am grateful to Dr. Harrell for nominating me,” Rajendra said. “I am big on the concept of leaders building leaders. To me, that concept is leadership in a nutshell. My experiences as a student leader at South led to me serving on Mayor Sandy Stimpson’s Millennial Challenge Team.”

Harrell has seen Rajendra evolve as a student, leader and person.

“I have had the opportunity to watch Ravi grow as an authentic leader who excels in all areas with which he is involved,” she noted. “He is incredibly passionate about all things South and that has translated into positive impacts each semester. Ravi continues to be a mentor for up-and-coming student leaders.”

Rajendra, a graduate of the Loveless Academic Magnet (LAMP) high school, is scheduled graduate with his bachelor’s degree from South in May. He plans to attend medical school.