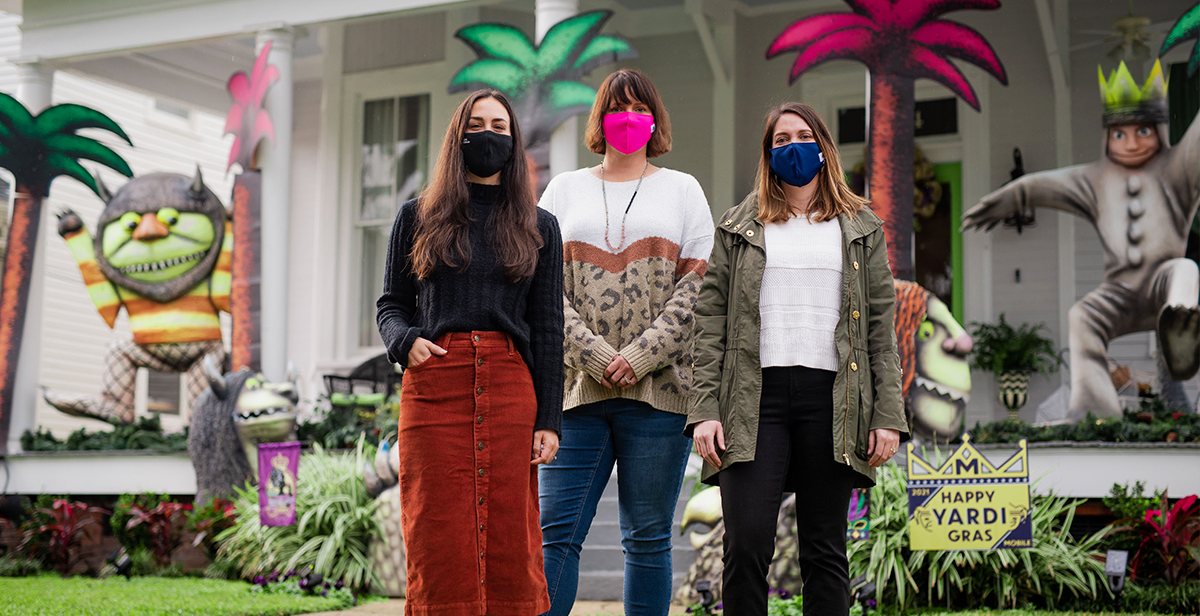 The Mobile Porch Parade — a creative twist on Mardi Gras tradition during the coronavirus pandemic – started with a website for Carnival home decorations.

“I launched it kind of casually,” said Suzanne Sarver, a local commercial artist. “I just sent it out to a couple of friends.”

Those friends included fellow graduates and students from the University of South Alabama.

Stacy Wellborn, a Ph.D. candidate in business at South, started a Facebook page for the Mobile Porch Parade.

Dozens and then hundreds of residents signed up to decorate their homes with increasingly elaborate Mardi Gras displays. Sarver stopped counting at 420 participants. With parades canceled because of COVID restrictions, people are starved for holiday color and spirit.

On Government Street, a peacock spreads its wings across the front of one house. Another home offers a scene from “Bridgerton,” the Netflix costume drama. Dragons and Moon Pies show up across town.

In just a few weeks, people have embraced the Mobile Porch Parade. In its name, they’ve donated more than $2,822 to the Food Pantry at Central and Restore Mobile.

Courtney Harris, a 2014 graphic design graduate of South, helped create a map of holiday displays. Her own house features a more personal theme than most.

“It’s called Rotten Rocket,” Harris said. “Our 12-year-old dog passed away in December, and it’s kind of an homage to him. My husband built it out of plywood and I painted everything. There’s a picture of our cat, Winnie. We did it like Rocket was sending her into space.”

The most enthusiastic neighborhoods for the Mobile Porch Parade are in the Oakleigh Garden and Old Dauphin Way historic districts.

Some residents rent 10-foot-tall pieces from the same Mobile companies that built parade floats in previous years. Others hire artists for custom designs.

“My logic was that I would have spent that money buying things to throw in a parade,” Wellborn said. “So I can still put that into the economy and support local artists.”

She and her neighbors put up matching yard signs on their street for a “Krewe de Palmetto.” Her front porch decoration features monsters from the children’s book, “Where the Wild Things Are.”

The house next door features “Paw Patrol” cartoon characters and several fire hydrants. Kids get a kick out of the display. So do their parents.

“We have people driving by, walking by,” Wellborn said. “There’s been a group bicycling through the neighborhood, looking at all the houses. It gets people out of the house, and it’s safe and open, so I think they’re enjoying it.”

When Sarver started the Mobile Porch Parade, she decorated her own home with purple-and-gold masks and matching tassels. Then she watched as people began adorning their homes with huge float figures and over-the-top displays.

“Our place was awesome when it started,” she said, laughing, “but now it’s blown out of the water.”

When it rains, residents try to cover their displays to keep the colors from running and cardboard from sagging. The Mardi Gras season is much longer than a four-hour parade.

Sarver has heard from fans in Daphne and Fairhope, where there is an Eastern Shore Yardi Gras organization. She’s also gotten e-mails from as far away as Huntsville and Baton Rouge, La.

“I wonder if people think it’s a mobile porch parade,” she says. “That’s the only thing I can think of.”

Mardi Gras supporters in Mobile can’t wait for the pandemic to end and the 2022 Carnival season to begin. Dress balls and grand parades will return to their place of pride. So will the Porch Parade.