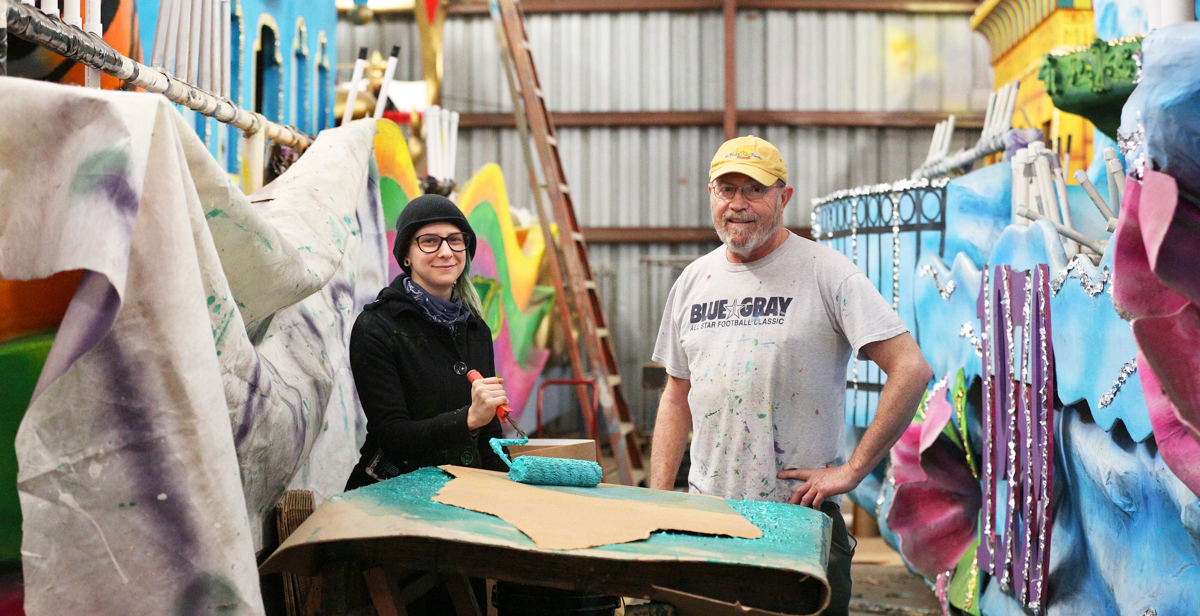 Vanessa Quintana is one of the latest South graduates to work under Steve Mussell, right, designing and building Carnival floats. “Steve tells me to put on my Mardi Gras goggles. He wants me to look at a float like someone would at a parade.”

The Mardi Gras traditions of Mobile include a talented group of University of South Alabama artists who build, shape and paint the fanciful floats that roll through downtown parades.

The story begins with Steve Mussell, class of 1981, who’s been building parade floats for more than 40 years. He grew up in Mobile, which has the oldest Carnival tradition in America. He enjoys the artistry of papier-mâché construction that blends glue, paper and cardboard.

“In Louisiana, they use canvas, which is more durable,” he says. “What we do is more fragile, but our stuff is more sculptural.”

Mussell, 66, wears paint-spattered clothes and works in tin-roofed barns south of downtown. He’s used to the heat of summer and the cold of winter, along with the long days and short deadlines before Mardi Gras. Somehow, the floats rise and parades roll, no matter what.

His business, the Mirth Company, designs and builds floats for some of Mobile’s most iconic parading groups — Crewe of Columbus, Mystic Stripers, Infant Mystics and Knights of Revelry.

Mussell, who studied in what is now the art and art history department, has hired many South-trained artists over the years. Some went on to start their own float-building companies. Others are just getting started.

Vanessa Quintana is one of the latest USA artists. A graduate of 2010, Quintana is from the Mississippi Gulf Coast, but didn’t know much about Mardi Gras until two years ago. Her experience with ceramics helped her learn new techniques.

“You start with the armature, a wooden frame,” she says. “Then you tear cardboard into strips and build an exoskeleton. Sometimes you build separate pieces and put them into place. Then you keep adding layers, and it’s more like papier-mâché. Painting comes next. There’s a base coat of white paint and then colors.”

Quintana, 31, sports her own paint-smeared tights and a red “South Alabama” sweatshirt. Her brown hair features streaks of green. She’s grateful to be a working artist with a one-of-a-kind niche in the creative world.

“I never imagined this would be part of my life,” she says. “Here I am at work surrounded by these giant figures. A lot of times, it doesn’t feel real, you know?”

Quintana listens to music and podcasts while working. Time passes and colorful characters take shape. Sometimes she has to step back for perspective.

“Steve tells me to put on my Mardi Gras goggles,” she says. “He wants me to look at a float like someone would at a parade. You stand far away, squint and kind of turn your head.”

For George Criminale, ’83, Mardi Gras is a family business.

“My father built his first float in 1938,” he says. “It wasn’t his main job back then. He had a sign shop and did displays for businesses and homes around town, with Mardi Gras on the side.”

Criminale earned a theater degree at South Alabama and did stage lighting at the old Saenger Theatre downtown. He went on to become facilities manager for Fox News 10 in Mobile. He does electrical work for more than a half-dozen local parades.

The history of float lighting includes everything from torches and lanterns to railroad flares and marine lights. Now fluorescent and incandescent bulbs are being replaced by the latest in LED lights.

Criminale, 62, remembers when mechanicals – moving parts on a float – were powered by kids pulling on ropes inside a float. Now there are electric motors. Before generators, some float lights were powered by a series of car batteries.

“Near the end of a parade,” he says, “the lights would get dimmer and dimmer.”

During Carnival season, Criminale hustles between parades and broadcasts. Mobile wouldn’t be Mobile without Mardi Gras. His spirit is sometimes stronger than his stamina.

Mobile’s Meagan Marler, ’05, started painting Mardi Gras floats while she was still in high school. She started working for Mussell while earning her art degree from South Alabama.

For her, a parade is more like a critique session.

“Did that color work?” she asks. “Was that a dynamic-looking float? What could you have done better? It’s never the same. Some floats look great in the barn, but terrible on the street, and vice versa.”

Marler, 41, spent more than 20 years with the Mirth Company. Mussell encouraged her to go out on her own and take over a parade for the Order of Polka Dots. Her new company is called Mystic Float Works.

“This year, I’m by myself,” she says. “I knew I could do the actual work. It was the business end that was scary.”

Marler had to hire two assistants to work on her 14 floats. She’s learning to delegate responsibility. That’s new, too.

The Polka Dots are an all-woman krewe, which might have made her transition a little easier.

“Women have run parades before, but it’s mostly been men,” she says. “I’m not sure a men’s organization would have been so keen on the idea.”

Craig Stephens is another designer who studied at South and under Mussell before starting his own company, Carnival Artists.

“It’s a bizarre feeling,” said Stephens, 55. “You’re going 120 miles an hour, for months and months, and then nothing. It’s strange, but a relief.”

His company does floats for Mobile krewes including the Order of Myths, Order of LeShe’s and Mobile Mystics.

Stephens has eight full-time employees and adds more during the months before Mardi Gras. A few years ago, Carnival Artists moved into a new barn on Houston Street.

His business is always changing, but the vision remains the same.

“We’re trying to preserve a tradition of float-building in Mobile,” said Stephens, noting the style of float building using papier-mâché. “I think it’s important to preserve our identity.”

New Artist on Board

After graduating from South, Quintana did different jobs before recommitting to her art. She started a graphic design company, VQillustration, and began selling paintings and prints at the Art Walk in downtown Mobile.

That’s where she met a friend who heard about a job painting Mardi Gras floats. Did she know anyone who was interested? Why, yes, she did.

Quintana took that job with the Mirth Company. She was warned about the uncomfortable temperatures of a float barn. They range from 100 degrees in the summer to 20 degrees in the winter.

“You can’t have space heaters, because they’re a fire hazard, so your fingers get stiff, and you have to do this all detail work,” she says. “But the heat is much worse.”

At the same time, Quintana has the satisfaction of continuing the tradition of South graduates working in Mardi Gras.

She’s still learning the tricks of the float-building trade. There are ways to strip cardboard that make for a more even surface. There are details to painting and shading the final colors on a float.

Quintana invited her mother last year for her first parade in Mobile. The big reveal. All of her artistic work rolled right past them.

“I’m like a set designer finally seeing a stage with the actors on it,” she says, savoring the memory. “It’s at night, under the lights. Everything is leafed, which makes it look shiny, and everything just pops.”

After four decades of float building, Mussell tries to pace himself through Carnival season. Long bike rides around town help clear his mind and keep him in shape.

As a little boy, he would play “Mardi Gras” around the house.

“I would take the wheels off my Army man jeeps,” Mussell says, “and get toilet paper tubes to make dragons that would snake around.”

In the 1960s and ‘70s, Mobile was a smaller place. So was the University of South Alabama. And its art department.

One of the things Mussell learned in school was that any object can be made into art. Inspiration on a budget. Mardi Gras figures can be constructed with everything from chicken wire and scraps of wood to plastic pipe and acrylic globes.

“A good float builder drives by a pile a junk and goes ‘hmmm,’” he says.

Mussell still enjoys watching parades, but says he only catches beads in self-defense. His calendar hasn’t changed in 40 years. It’s always hectic when he’s finishing new floats and touching up old ones for the final week of parades.

“After that, it’s an easy pace,” he says. “After Mardi Gras, everybody takes off for a month.”