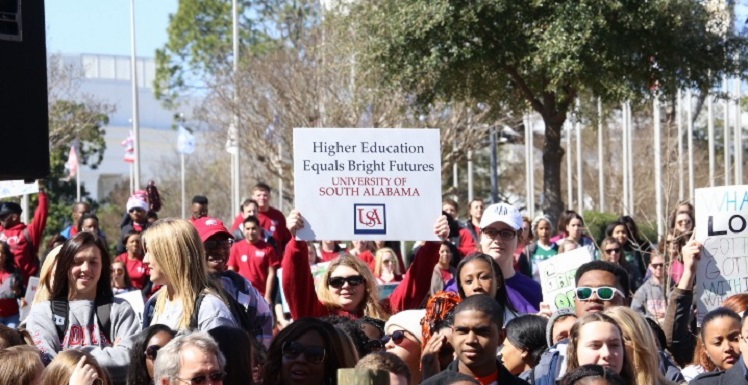 Higher Education Day is considered Montgomery’s largest annual advocacy rally, as students and employees from public universities throughout the state come together to remind Alabama’s political leaders of the need to improve appropriations for higher education.

The University of South Alabama family – students, faculty, staff, alumni and supporters – rallied in Montgomery today at the annual Higher Education Day and delivered a message to state lawmakers.

“The importance of higher education is that it bridges the gap between dreams and reality,” said Ravi Rajendra, president of the University’s Student Government Association, which helped organize several busloads of USA students who left campus early this morning for the rally. “At USA, we are realizing our dreams every day.”

Rajendra spoke at a USA luncheon which followed the rally on the State House steps, where the University had one of the largest delegations of student supporters.  Also present at the rally and luncheon was University President Tony Waldrop.

“It’s great to see USA people here today,” said Waldrop, who hosted the luncheon for the USA contingent and the Southwest Alabama legislative delegation.  “By showing up here you represent 16,000 students, 6,000 employees and more than 80,000 graduates.”

Gov. Robert Bentley also spoke at the luncheon, along with Speaker of the House Mike Hubbard, Speaker Pro Tem Victor Gaston and other members of the Southwest Alabama legislative delegation.

Higher Education Day is sponsored by the Higher Education Partnership, the advocacy network for the state's public universities.  The event is considered Montgomery’s largest annual advocacy rally, as students and employees from public universities throughout the state come together to remind Alabama’s political leaders of the need to improve appropriations for higher education, and to also remind lawmakers that universities have a large and involved voting bloc.

Earlier at the rally, Executive Director of the Higher Education Partnership Gordon Stone urged attendees to encourage state legislators to protect education funding.  “We want to remind every person in this state that Alabama’s public universities make a difference,” said Stone.  “When you invest in higher education, you invest in Alabama’s future.” 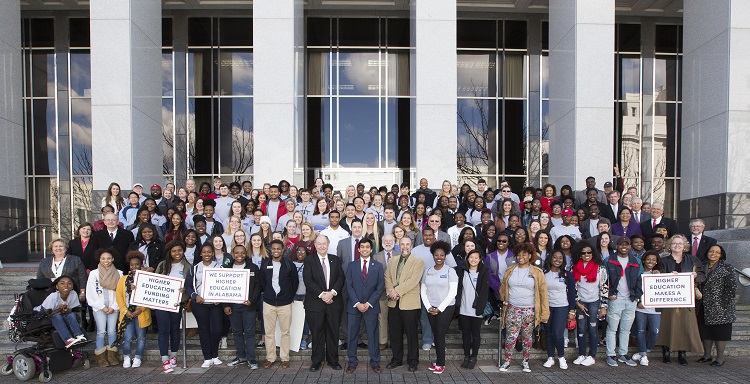