Fit for a Queen: Assistant Professor Lends a Hand, and Needle, for Carnival 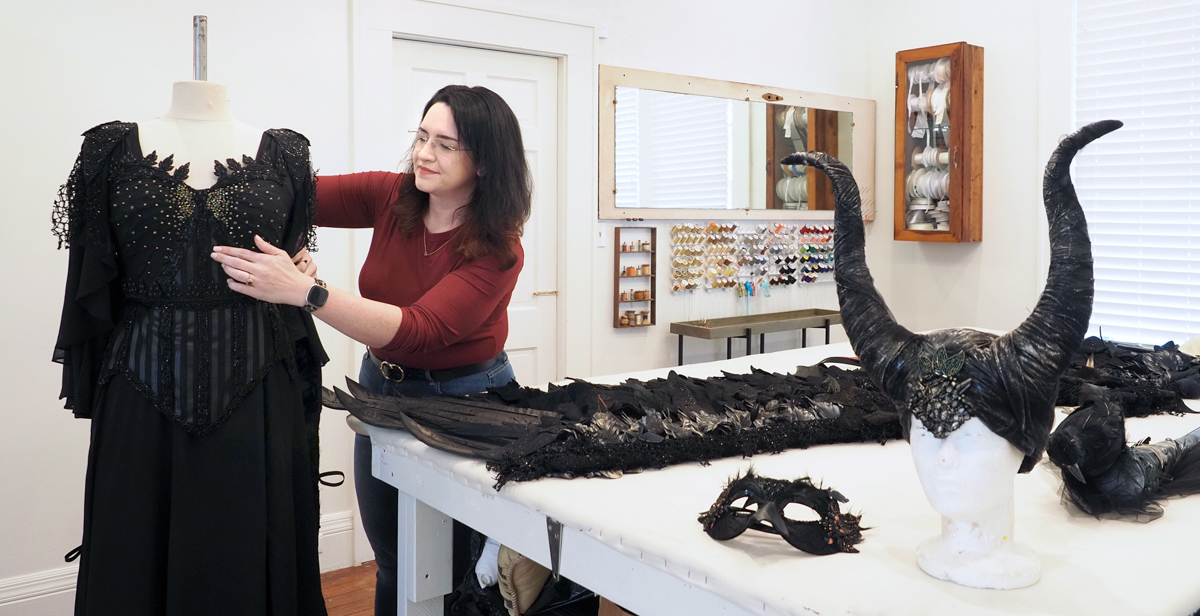 Christina Johnson, who teaches drama and costume design at South, works on a Mardi Gras gown at the Revelry Bloom studio in Mobile. The elaborate costume, inspired by the movie “Maleficent,” has been chosen for display at the Mobile Carnival Museum.

Christina Johnson grew up in Arkansas, studying to become a pharmacist, before finding herself drawn into art, theater and costume design.

“The first time I saw one of my costumes go out on stage, I was gone – hook, line and sinker,” she said. “My favorite character was Ariel in “The Tempest.” I took an old ’80s prom dress, tore it apart, and put it back together.”

Johnson became a costume designer and assistant theater professor, teaching in Arkansas before joining the faculty at the University of South Alabama in 2019. When the coronavirus pandemic dropped the curtain on a lot of live theater, she looked into flower arranging as another design skill. This led to event planners in Mobile, then sewing gowns and costumes for the oldest Carnival tradition in America.

“It was kind of an accident,” she said. “I always knew about Mardi Gras, but I had no idea what to expect. The intricacy of the detail, so much hand sewing and beading, it really blew my mind.”

She got her start working on the train of a ball gown for a queen of the Mobile Carnival Association. This season, she helped design and fabricate a black-and-gold costume inspired by “Maleficent,” the Disney movie. Just a few weeks ago, she was a member of the wardrobe crew for a Mardi Gras ball where a leading lady of the Nereides Society made her entrance wearing the costume.

“I almost cried when she came out,” Johnson said. “She was so beautiful, so happy, and that’s such a great thing to give someone.”

Julia Greer Fobes, who owns the Revelry Bloom company in Mobile, does weddings, corporate parties and Mardi Gras regalia. She has a background in art and theater, like Johnson, and is happy to have contributions from the South costumer.

“She’s so talented and is such an asset to our team,” Fobes said. “The ‘Maleficent’ gown has been chosen for the Mobile Carnival Museum, because it’s such a special costume.”

Johnson has talked with her about getting local students involved with Mardi Gras businesses, perhaps through an internship program.

“For years,” Fobes said, “I’ve wanted to reach out to South and do the same thing.”

Johnson, 34, grew up in Little Rock, Arkansas, where her mother was a nurse who didn’t sew. There was one thread, though, in her family history.

“My great-grandmother was a famous seamstress in Little Rock,” she said. “I found her old sewing kit and made clothes for my dolls.”

Johnson knew little about theater when she began designing costumes for plays as a college student in Arkansas. She made extra money as a wig stylist. She gained experience in summer stock theater productions and earned a Master’s of Fine Arts in costume design and production.

For a production of “Big Fish” at the Stagedoor Manor Performing Arts Training Center in Loch Sheldrake, New York, she oversaw costumes for more than 225 performers.

“I thought it would get the better of me,” she said, “but I surprised myself.”

In 2014, Johnson did costumes for a bilingual musical, “Alcestis Ascending,” produced with the Cuban National Office of Scenic Arts, which had a dual run in New York City and Havana.

“It was a wild ride,” she said. “I’d never been out of the country, and we were in Cuba before the embargo was lifted, so we had to have special papers with us at all times. In New York, we were at the Clurman Theatre on 42nd Street. That was really neat, to work in New York and go through the stage door.”

Johnson enjoys working with actors on their costumes. She likes to ask them about what their characters might carry in their pockets. It’s a way to help them explore the lives of the people they portray.

“I love hiding things in my costumes, too,” she said. “Things that aren’t for the audience, but for the performer.”

As an assistant professor in the department of theatre and dance, Johnson’s classes include Introduction to Theatre, Fundamentals of Design and a theater tech workshop. She gets to design and produce costumes for plays and musicals, while helping to train actors, technicians and designers.

“I knew I wanted to teach it,” she said. “I wanted to help other students find it the way I did.”

At South, Johnson enjoys a huge costume shop, 30 feet wide and 40 feet long, on the first floor of the Laidlaw Performing Arts Center. There are two large cutting tables, along with a row of sewing machines. Natural light, a rarity in many cramped theater spaces, streams through four large windows.

For practice, her students sew scrunchies and cloth face masks. One design was for performers in order to adhere to COVID guidelines.

“I dropped the top of the mask, so you can get more of their expressions,” Johnson said. “And I extended the mouth shape so they have more room for articulation.”

In her spare time, she and her husband, Logan, are avid hikers and campers. They have an RV for getting out of town. She also does some drawing and painting.

If she had more time, Johnson would like to work with local theater groups. She’s also interested in ballet costuming.

This year, some of her Mardi Gras gowns have taken weeks to complete. The “Maleficent” costume features an intricate pattern derived from raven’s wings.

“That was an adventure all by itself,” she said. “I worked on it for at least 64 hours. Probably more, because I don’t count the time when I mess something up and have to start over.”

At Revelry Bloom, Johnson brings fresh eyes to each gown. Many Carnival costumes have multiple layers, so she’s suggested using leather needles, which have a knife edge and are made to cut through thick material. In other ways, she’s on a learning curve.