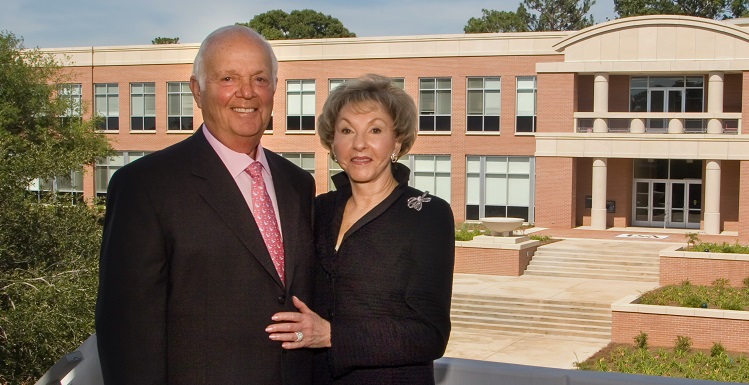 Herbert A. Meisler has donated $5 million to expand the USA Medical Center’s Trauma Center, which will be renamed the Fanny R. Meisler Trauma Center. Here, the couple stands in front of Meisler Hall shortly after its construction.

Longtime University of South Alabama supporter Herbert A. Meisler has donated $5 million to expand the USA Medical Center's Trauma Center, which will be renamed the Fanny Meisler Trauma Center, in honor of Meisler’s late wife.

The gift will more than double the size of USA’s trauma center from 11,000 to 27,000 square feet and convert the current 22 private and semi-private exam rooms to 41 private exam beds. The renovation will serve to meet the increasing demands placed upon the region’s only Level 1 trauma center.

“The USA Medical Center serves thousands of people each year and saves the lives of our citizens every day,” Meisler said. “The expansion of its Level 1 trauma center—the only one of its kind in the region—is vitally important to our community. I am so pleased to be able to give back to the University of South Alabama and to the USA Health system in this way.”

Dr. John V. Marymont, vice president for medical affairs and dean of USA’s College of Medicine, said this investment is transformative for this region and the state.

In addition to Meisler’s gift, Alabama Gov. Kay Ivey announced last August that $4 million from an economic bond issue will be directed to the cost of the trauma center’s renovation.

“The USA Medical Center’s Level 1 trauma center is critical to our state’s Gulf Coast region,” Gov. Ivey said. “Not only is it a vital economic draw for corporate development, a facility of this caliber is imperative to our citizens who rely on receiving life-saving care. Mr. Meisler’s generosity will allow the trauma center expansion to move forward and become a reality.”