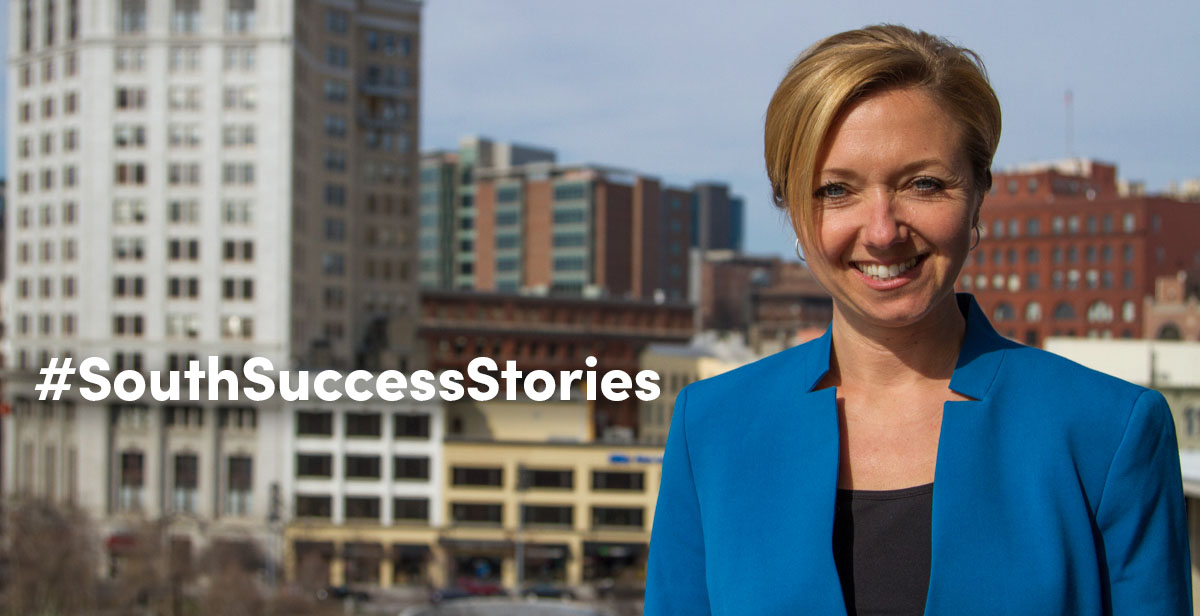 While attending the University of South Alabama in the 1990s, Rosalynn Bliss was preparing herself for her pioneering career in politics. She just didn’t know it.

In 2016, Bliss became the first woman mayor of Grand Rapids, which is two and a half hours northwest of Detroit and the second-largest city in Michigan. At 40, she was also the city’s youngest mayor in 132 years.

As it turned out, her education at South gave her a solid preparation for her career path — first social work, then an unexpected evolution into politics. One “powerful, powerful experience” while she was at the University especially shaped her thinking and stoked her passion for trying to make the world better.

She came to South almost by chance. Bliss grew up in Sault Ste. Marie, a small city at the northeastern tip of Michigan’s Upper Peninsula. With 10 children, her parents couldn’t help much with college financing. So she applied only to colleges and universities in the South, where tuition was less expensive.

Also, she admitted with a laugh, “I really wanted to get away from the snow.”

“I really wanted to get away from the snow.”

She almost went to college in Louisiana. Then USA offered her an academic scholarship. She took it.

“I had a wonderful time at South,” said Bliss, then known by her maiden name, Rosalynn Burley. “I loved my experience there. I had incredible professors. I did a senior honors thesis in the department of psychology. I was very active in the criminal justice department as well.” Her senior year, she was president of the USA chapter of Psi Chi, the International Honor Society in Psychology.

After graduation, she headed back to her birth state, where her family lived. Specifically, she moved to Grand Rapids, home of her now-former husband, whom she had met during a summer vacation in Michigan. “I got a job and got married and went to graduate school,” she said.

She earned a master’s degree in social work from Michigan State University. She began working on behalf of abused children and victims of domestic violence. “It was through that community work I was doing that I met a group of women who were very passionate about getting more women elected to office,” Bliss said.

Popular incumbent Mayor George Heartwell was bumping up against a term limit. He encouraged her to move up to his office. “So,” Bliss said, “I ran for mayor in 2015.”

In a field of four candidates, she received 66 percent of the vote. She was inaugurated on January 1, 2016. “There were a lot of people who were very excited to see a female sit in the seat of mayor,” she said. She was among them, of course. However, she takes pains to frame her historic victory in terms of inclusion and sharing.

“I have served with so many amazing men,” she said. “Men are great leaders. But there’s value in having diversity around every single table. And that includes diversity of age and gender and race. Because better decisions are made.

“So it’s not that one’s better than the other, but that diversity really matters.”

Heartwell, her predecessor, is now a member of the State Transportation Commission. He gives Bliss high marks. “Rosalynn was ready to take the reins of leadership in Grand Rapids and has exceeded my already very high expectations,” he said. “She took my efforts at environmental sustainability and racial equity to a critical new level and added work in housing affordability that far exceeded anything I had imagined.

“Grand Rapids continues to grow — in population, economic strength and resiliency — due to her outstanding work,” Heartwell said.

“Grand Rapids continues to grow — in population, economic strength and resiliency — due to her outstanding work.”

During her first State of the City address, Bliss encouraged her constituents to read a book by Todd E. Robinson called “A City Within a City: The Black Freedom Struggle in Grand Rapids, Michigan.”

“We’re a city where we have significant racial disparities that exist across outcomes,” she said. “It’s been a priority of mine as mayor to really look at what we can do structurally and systemically to change those outcomes and be a more equitable city.”

While at South, she did an internship at a private facility for troubled teen boys. The experience affected her profoundly. She worked in the clinical part of the program, which offered individual and group therapy, and did some classroom tutoring.

“It was shocking,” Bliss said. “Seeing the human impact of racialized outcomes and the impact of structural racism right there was compelling and powerful.”

Her social work career and then her experience as a city commissioner deepened her commitment to leveling the playing field for all. “I worked with a lot of victims and  families that were living in communities that did not have the resources and support that so many other families had access to,” she said. “I think through your work, through those personal experiences, you gain a much deeper appreciation and understanding.”

Bliss has kept a foot in the academic world as an adjunct professor at Grand Valley State University’s School of Social Work in Grand Rapids and was recently named the Meijer Endowed Chair in Entrepreneurship and Innovation in Grand Valley’s Frederik Meijer Honors College. She is also running for reelection as mayor. Heartwell thinks that’s just the start.

“Look for her to emerge as a leader on the national scene,” he said. “She will, after all, be only 48 when she finishes her second term as mayor (I have little doubt that she will be reelected in November 2019), a ripe age for stepping ably into another order of government.”