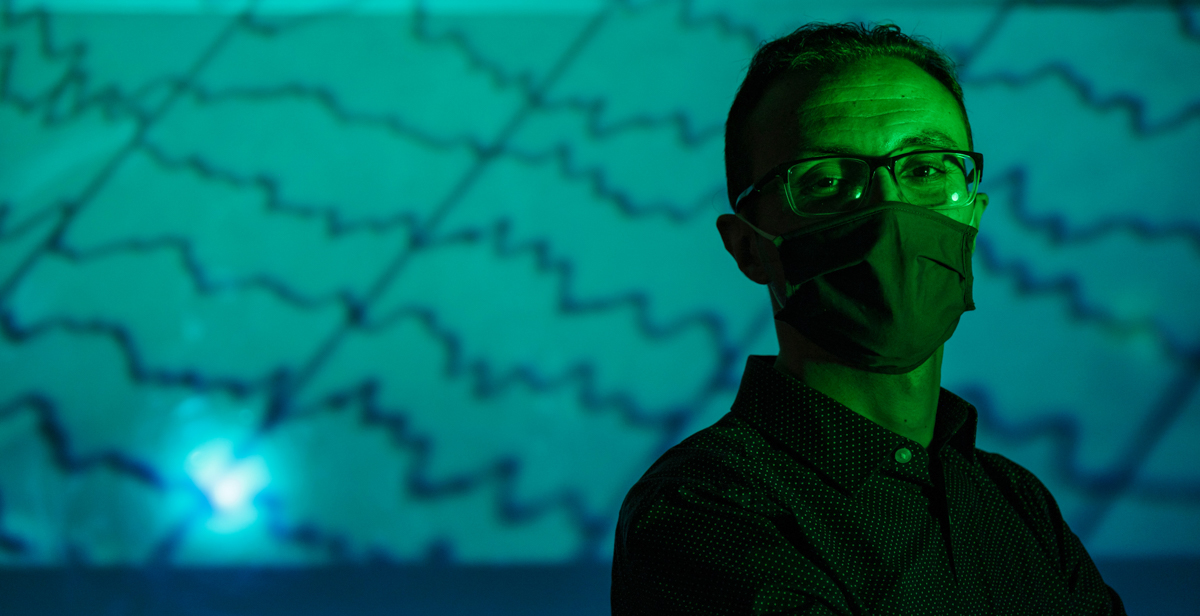 The research of Dr. Mohamed Shaban, assistant professor of electrical engineering at the University of South Alabama, focuses on using brain waves — shown here in this photo illustration — to reveal cognitive impairment as an early sign of Parkinson's Disease.

For Dr. Mohamed Shaban, an assistant professor of electrical engineering at the University of South Alabama, deep learning computer analysis offers a powerful tool in using electroencephalography for the early detection of Parkinson’s disease.

It’s a new way of looking at an old test.

Shaban’s research focuses on brain waves — the familiar squiggly lines of an EEG — which have been used to study neural activity for more than half a century. The latest computer-aided research techniques help reveal clues such as “synchrony,” an excessive synchronization of waves that indicates the cognitive impairment of a brain disorder.

“Deep learning and machine learning extract features that really can’t be detected with the eye,” he said. “They can be simple, they can be complicated, they can be combinations of many features, which you reach through different layers of analysis. Artificial Intelligence will do that for you.”

In May, Shaban will present a paper at the 10th International EMBS Conference on Neural Engineering. Using an artificial neural network, he was able to classify subjects in Parkinson’s disease categories with an accuracy rate of 98 percent.

“Nobody has reached that before,” he said. “The EEG has not been a well-known modality, but now we’re seeing something.”

Parkinson’s disease is the second most common neurodegenerative disorder in the United States, after Alzheimer’s. Symptoms include hand tremors, slowness of movement and changes in speech and handwriting, along with depression, anxiety, sleep and emotional problems. Nearly 1 million Americans live with these disorders, according to the Parkinson’s Foundation, and 60,000 Americans are diagnosed with the disease every year. The cause of Parkinson’s disease remains unknown, but both inherited and environmental factors are believed to play a role. There is no cure, though symptoms may be treatable.

Cognitive decline is an early feature of Parkinson’s, with studies suggesting that most patients exhibit sub-clinical impairment at the time of diagnosis. Cognitive function continues to decline with disease progression, resulting in dementia for more than 80 percent of patients.

“It’s very important to have an early clinical diagnosis,” Shaban said. “You can start therapeutic treatments that slow down the neurodegenerative process.”

EEG scans are inexpensive and noninvasive tests that use a sensor array placed on the scalp of a patient. Electrodes measure the electrical activity of the brain over time. Beta and gamma waves are related to memory and cognition.

These tests have not been used much in the diagnosis of Parkinson’s. Shaban hopes to change that.

Mahalia Polk, a graduate student in electrical engineering, joined Shaban on the deep learning project in the fall of 2020. Neither of them had worked with EEG test results.

“Getting started, it felt overwhelming to look at these huge datasets,” she said. “It was interesting and frustrating to take that first step.”

She worked with a mathematical programming site called MATLAB to create a time-series representation of data from the wave information of EEG scans. In her office cubicle in Shelby Hall, she still has a yellow Post-it Note with tips for the “Best Patterns” to perform a function called CGB — conjugate gradient backpropogation.

Polk has been interested in engineering since she was a teenager being home-schooled in Mobile. Her grandfather was a pipefitter who helped build power plants. Her father is a travel nurse.

Her goal is to combine engineering with medical research, and that’s exactly what she’s doing with Shaban.

“I like the idea of being able to help people like my dad does as a nurse,” she said. “I can’t think of more impactful career than one that involves catching diseases early so they can be treated better.”

Shaban is a native of Egypt, where his mother is a biologist and his father is a mechanical engineer. Ten years ago, they supported his decision to earn a Ph.D. in the United States.

After six months, he had second thoughts.

“I was very homesick,” Shaban said. “I was the first generation to come to a new country with a new language.”

Things got better. He and his wife became more comfortable. In 2019, he joined the faculty at the University of South Alabama.

Shaban had used deep learning to study diabetic retinopathy, a complication of the blood sugar disorder. He brought some of the same computer-aided techniques to the study of EEG scans and Parkinson’s Disease.

He has been awarded more than $30,000 in grants from the Southeastern Center for Electrical Engineering Education.

Shaban is working with another South graduate student in genomics, using DNA sequences and mapping for the diagnosis of Parkinson’s Disease. Deep learning is part of that research, too.

“I’m working now in two directions, and AI is helpful in both of them,” he said. “Artificial intelligence can help with the early diagnosis of Parkinson’s, and it can also be helpful in genomics. We are just getting started in that area, but it’s very exciting. That might be a future project.”