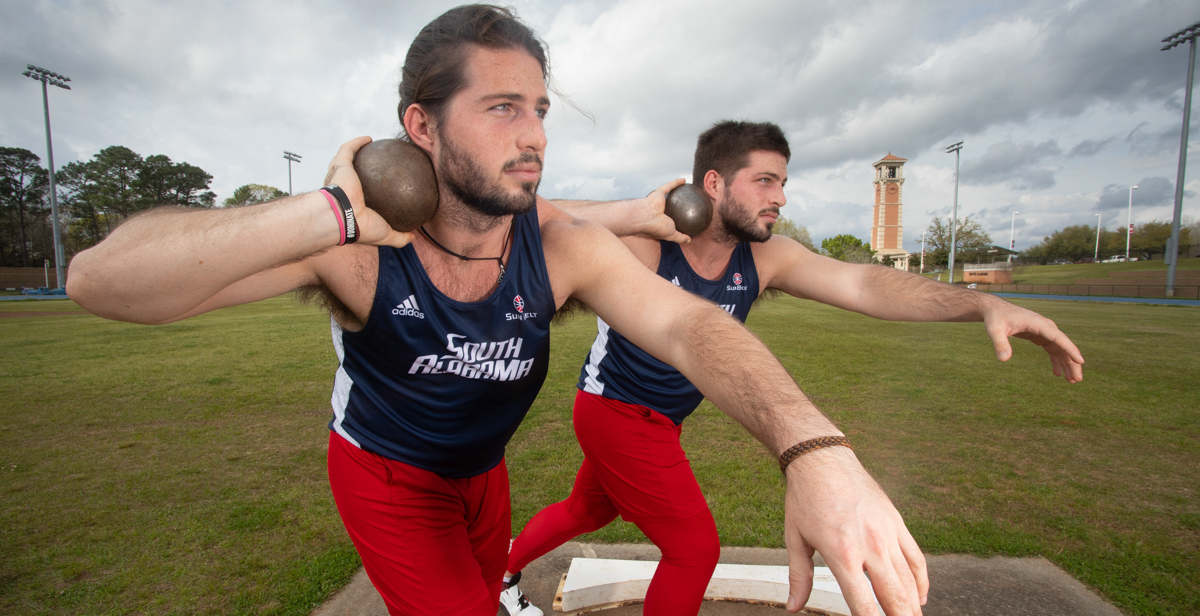 Twin brothers Ethan Boyd, left, and Thomas Boyd are first-year medical students at the University of South Alabama College of Medicine and athletes on the USA men's track and field team. “With us being so close and doing everything the same, part of that is competing against each other,” Thomas says.

While they were still playing high school football in Oneonta, Ala., brothers Ethan and Thomas Boyd were already certain of a few things. Chief among them was that they wanted to become physicians, followed closely by the desire to attend the University of South Alabama.

Fast forward a few years and the Boyd brothers – twins born minutes apart – are finishing their first year of medical school at the USA College of Medicine. And in a surprise to both, they are attending the University on track and field scholarships, having traded the pigskin for Sun Belt Conference competitions in events like hammer throw and shot put.

The 23-year-olds are fiercely competitive, but not in the way many of their classmates and teammates assume: they are best friends, study mates and the one person on campus each is sure they can trust 100 percent. The Boyds challenge each other in the film room, as well as in preparing for the classroom. And Thomas, the younger brother by 120 seconds, says that connection helps them be their best selves.

“I think that in whatever we're doing, it tends to elevate us a little bit, because we're really competitive in pretty much everything we do,” Thomas said. “With us being so close and doing everything the same, part of that is competing against each other.”

Both agree their mom is the origin of that competitiveness, and they love her all the more for it.

He credits his pediatrician back home in Oneonta with awakening the desire to pursue medicine, all the way back in elementary school.

“He made it to where it wasn't such a brutal thing to go to the doctor,” Ethan said. “And I always thought that made a big difference.”

He and Thomas are currently in their second semester as medical students, and the experience has provided a few surprises, contrasted against their expectations as younger men. Ethan said the first few days doing lab work with cadavers was a bit of a shock but, “you get accustomed to it pretty quickly and I've had a good experience.”

For Thomas, the surprise was the flexibility of his schedule, something both men said set the University apart, especially for student-athletes. Initially he was doubtful he'd be able to continue to compete in track and field when he started medical school.

“I know for me, that has been a huge help,” Thomas said. “As flexible as they've made things, it's allowed that to be a reality.”

But it's no small feat for the Boyds to be highly competitive as redshirt seniors on the track and field team, and keep up their studies as they move through medical school. Both credit the discipline learned as athletes training year-round, and accountability to the other brother, but it still falls on each man to make sure the work gets done, and done correctly.

“It is a lot to handle, but I think you just have to be where your feet are, give 100 percent where you are and manage your time wisely,” Ethan said. “When you're doing school work, you have to completely focus on school.

Ethan and Thomas have been fortunate during their playing careers to avoid major injury, but both say they are interested in pursuing orthopedics – careers that could cross over into sports medicine. And it's possible one or both could end up as surgeons, although Thomas might shift to another role in the operating theater: anesthesiologist.

“I liked anesthesiology growing up, and thought it was a cool job, just based off of how much you get to see,” Thomas said. “But, being in sports in high school, a lot of the doctors I knew were orthopedic surgeons. So when I started shadowing, the more I watched, the more I thought, 'I really think I would enjoy this line of work.'”

To listen to the brothers, USA is the exact place they need to be as they discover what their career passions are, and how to best achieve them. Coaches and professors at the university have proven a willingness to help them reach their goals, but it's not something the Boyds take for granted. Neither is the support of their younger brother or parents, who recently relocated to Virginia.

As they move forward through medical school, they continue to rely on each other, and the competitive spirit that has fueled them as far back as T-ball, when they were children.

“It's great to have a friend in what you're doing,” Thomas said. “And if you are having a problem, being able to bounce that off of somebody, whether in track or in school, there's always a different set of ears that a lot of times will understand something that you didn't quite pick up.”