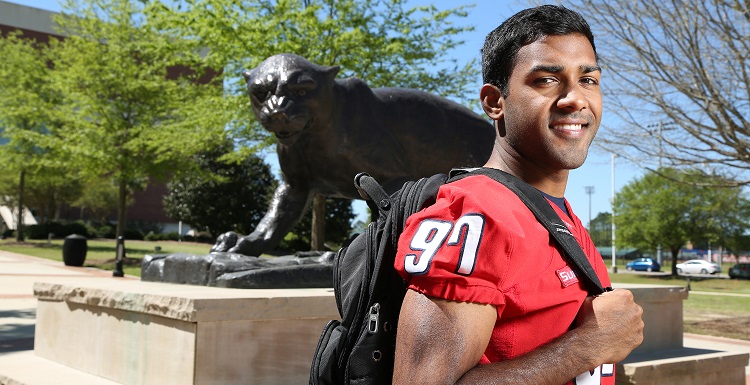 Aleem Sunanon's beliefs on the importance of academics in collegiate athletics were established long before he ever arrived on campus. “It started with my parents because they hold education to a very high standard more than anything else,” he said.

Coming out of Orlando’s Olympia High School, Aleem Sunanon never dreamed of the possibilities that attending college might offer.  But now that he has established himself as a leader off the field on the University of South Alabama campus and within the Sun Belt Conference, he’s proving there’s no limits to what he can accomplish both in college football as well as the community.

Sunanon was recruited by schools across the Southeast — Georgia Tech, North Carolina and North Carolina State, to name a few.  He also attended camps on the campuses of Alabama, Florida State and Miami (Fla.), but in the end signed a National Letter-of-Intent with the Jags, and since enrolling in school in the fall of 2012 has worked not just to establish himself as one of the top placekickers in the Sun Belt, but a voice to be heard on matters outside of football.  That included recently catching national attention for comments that academics should play a role in bowl eligibility.

“Going to all those camps and visiting other schools, you see what the community and environment are.  This place felt the most like home to me, and I would rather be at a place that feels like home,” Sunanon said.  “When you feel comfortable you perform better, but if you are at a place with a bunch of tension and controversy that will always be on your mind and alter your performance.”

His first year with the program, Sunanon sat out as a redshirt.  It not only allowed him to better prepare to compete for a starting position but enabled him to establish an academic foundation on which he could build as his career progressed.

“I used my freshman year — my redshirt year — as a big learning experience,” he said.  It was my first time living on my own and I was in a different state, so I wanted to prioritize my responsibilities and academics were most important.  When I look back on it I see how important having study hall hours were, and that redshirt year was helpful in figuring out my schedule and organizing my time management skills.

“I believe that first year is what molded me into becoming the person I am today.”

Sunanon’s beliefs on the importance of academics in collegiate athletics were established long before he ever arrived on campus.  “It started with my parents because they hold education to a very high standard more than anything else,” he said.  “If it weren’t for them, I wouldn’t have the concentration and the drive that I have academically; they pushed me to the point where it was second nature that academics came first.  It struck me when I first heard it, but as a student-athlete you are a student first.  You can come to college and potentially get two degrees that are paid for if you are on scholarship.”

Nearly four years later, he has backed up those sentiments with his performance in the classroom.  Sunanon received his undergraduate degree in professional health sciences from USA in December, and is now working toward a master’s degree in public administration with a concentration in health care.

“I didn’t think I would be able to do it when I first came here, but when you get into that frame of mind and you realize it is right in front of you, that’s when things started coming around,” said Sunanon of graduating early in order to pursue a second degree.

Sunanon had an opportunity recently to follow through with his academic viewpoint in a public forum.  At the start of the spring semester, he was selected to serve on the Postseason Football Bowl Games Ad Hoc Working Group, a collective of representatives from all 10 NCAA Football Bowl Subdivision conferences that has been charged with conducting a review of postseason football issues, with an emphasis on “deserving team” eligibility to participate in postseason bowl games and the student experience at postseason bowl games.  “I didn’t know how important it was at first, but I thought it was a great opportunity,” he said.  “After I agreed to do it I was sent a roster of who was on the committee, that’s when I thought, ‘This is real.  This is big time.’”

In addition to Sunanon, other members of the committee include Georgia Director of Athletics Greg McGarity, Miami (Fla.) AD Blake James, Penn State AD Sandy Barbour, Arizona State AD Ray Anderson and Bob Bowlsby, the commissioner of the Big 12 Conference.  After several conference calls earlier in the semester, the group convened for the first time on Thursday and Friday in Houston prior to the start of the men’s basketball Final Four.

“Walking in there was not intimidating, though I’m not sure what the right word is,” he said.  “But you see the names of the people, their position and who they represent, and you know these are people of stature who are well respected.  It was a huge learning experience for me, but I also wanted to contribute."

Following those conference calls, Sunanon was quoted in an ESPN.com story as saying he thought academic standards should matter when it comes to qualifying for bowl eligibility.

Needless to say, that opinion caught the attention of individuals across the country.  “Just because it was on ESPN.com, so many people think, ‘Oh my gosh, that’s so cool!’” Sunanon stated.  “One of my very good friends from high school, Morgan Frazier, is a gymnast at Florida and the president of their SAAC (Student-Athlete Advisory Committee).  She saw that article and we got to talking about it, it was cool to see how far that news has travelled.  A couple of my dad’s associates at work came to talk to him about it, and so did the CEO of his company.  I never thought that it was going to make it this far, to be honest.”

Regardless of others' opinions on his stance, Sunanon maintains the importance of academics in collegiate athletics.

“It’s very important to me because no matter what sport you compete in, it’s going to come to an end sometime, and you can’t rely on the knowledge of that sport or the earnings you might get from it to use for the rest of your life,” he said.  “If you have that degree to fall back on, you will be a step ahead of a lot of other people.  Once you have that degree, no one can take it away from you, and it will open up so many opportunities for you.”

Not only has Sunanon had a key role in discussions regarding the future of NCAA football, he also has taken on a leadership role in the school’s Student-Athlete Advisory Committee that has led to a national opportunity.  He first learned he was appointed to the group as a representative of the football program by Director of Player Personnel Mark Hewes — “I had no idea what that (committee) was,” he explained — but has since seen his role grow.  Currently the group’s vice president, Sunanon attended a SBC SAAC conference in New Orleans last summer.

“That’s what struck me, getting to meet all these people and having an impact not only in school and the Sun Belt, but in the NCAA,” he said of the experience.  “I thought if I continued to be active that it would open up more possibilities.”

That opportunity came in January.  Around the same time that he was chosen to become a part of the bowl working group, Sunanon was one of two representatives selected to represent the Sun Belt at the annual NCAA Student-Athlete Leadership Forum; it is set to take place Thursday through Sunday in Phoenix, Ariz.

“It was an honor to be selected by the Sun Belt Conference to represent them,” he said.  “Seeing as there will be over 300 student-athletes and staff members together, it’s really exciting to be able to share stories, communicate and network.”

“He has really emerged as a leader in the last year,” said Kristina Villavicencio, USA’s associate director of compliance who works with the school’s SAAC.  “When Aleem represented South Alabama at the Sun Belt SAAC conference in New Orleans, you could see he really understood the organization as a whole and what his job is to bring back to the committee here.  He has been very vocal in his opinions on behalf of student-athletes, and the ideas he comes forth with have really helped our student-athletes as a whole.”

Sunanon’s academic achievements prior to USA were highlighted by induction into the National Honor Society at Olympia High, and it was that organization’s desire to do community service that led him to first became interested in making a contribution off the field.  “It was instilled in me then that not only are you doing it for the National Honor Society, but you’re doing it to help others and to better the community.  That’s when it started, and it stuck,” he observed.

Beyond this weekend’s event, Sunanon has much to look forward to, both on and off the field.  In the fall, the senior will try to help the Jaguars return to a postseason bowl game for the second time in program history.  A two-time all-Sun Belt honorable mention selection, he already owns school career records with 49 field goals — including two separate streaks of 12 makes in a row — and 240 points.

And once he completes his master’s program, Sunanon is looking to follow not one, but both parents, in the professional world, aiming to work in hospital administration with an eye on eventually moving up to the corporate level.  His father, Claston, works for an Orlando utility company — “he’s in the business side of the world,” Sunanon explained — while his mother, Shelly, is employed in a hospital where she works with newborn children.  “I like what both of them do, I wish I could have two jobs and do both,” he stated.  “But I thought what happens if you combine the two of them — if I could work on the business side like my dad, but in a hospital setting — and that’s how I found that degree.”

“When we had Aleem in as a recruit at a kicking camp the summer before his senior year, meeting him you could see how calm and cool he was,” Jag head coach Joey Jones recalled.  “And when we put him in some pressure situations during competition periods, he always came through.  He didn’t have the strongest leg in the world, but we knew he was going to make the 40- to 47-yarders; nerves weren’t going to be a part of who he is.

“He’s always been a leader,” Jones continued.  “His parents have raised a good young man, and he has also progressed since he has gotten here.  Aleem is more open with other players, he is more at ease with himself; it’s just a maturity thing that you see in seniors who have been around the block a few times.  The players really respect him.  You can tell they know he is a real genuine person.”

Once concerned with just playing college football while earning a degree, Aleem Sunanon has learned there is so much more once you arrive on campus and immerse yourself in activities outside the game.

“Never in a million years did I expect all of this to happen,” Sunanon said.  “You think that you’re going to play football in college, you’re going to get a degree, and that’s all you’re at school for.  Once you get there you understand the other side of it, you see that you have the opportunity to grow.  You can’t expect that stuff to just happen, you have to put yourself in a position to do it rather than sitting around waiting for them to come to you.”