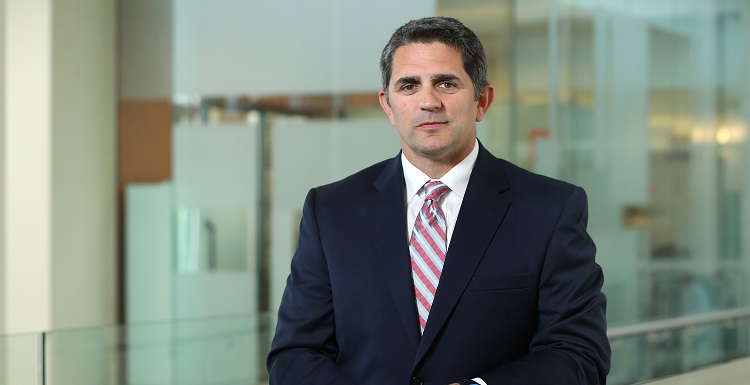 Dr. Rodney Rocconi, oncologist at the USA Mitchell Cancer Institute, evaluated 29 patients with a genetically engineered vaccine made from tumor cells acquired from each patient. The results indicate targeted immunotherapy not only improves outcomes for patients battling recurrent ovarian cancer but incorporating the approach sooner could substantially extend survival.

Rocconi, chief of MCI’s Gynecologic Oncology Service, evaluated 29 patients with a genetically engineered vaccine made from tumor cells acquired from each patient. The personalized vaccine, produced by Dallas-based biotech company Gradalis, is designed to attack cancer cells by recognizing patient-specific antigens within the tumor cells.

“Unlike most other immune therapies, this vaccine stimulates the patient’s immune cells to recognize and attack the tumor specifically,” said Rocconi, who also serves as MCI’s associate director for clinical research. He presented the research results at the Society of Gynecologic Oncology’s Annual Meeting on Women’s Cancer in New Orleans on March 26.

The Phase I study focused primarily on the safety of the targeted therapy, and Rocconi said only one “serious adverse event” of fatigue was recorded and mild, injection-site irritation reported by other participants. Meanwhile, he characterized the response rate as surprisingly robust.

Of the 29 trial participants, 23 were being treated for recurrent ovarian cancer, while the remaining six used the targeted therapy as a maintenance regimen following their first round of treatment.

Most telling, he said, was the use of an ELISPOT (Enzyme-Linked ImmunoSpot) test to determine if a patient’s T-cells would be activated toward the tumor. The test was shown to be predictive of both response and survival. On average, patients who responded positively to the test showed a significant increase in survival of 42 months compared with only 10.8 months for those who did not.

“What’s novel about this vaccine is that it’s personalized to the antigens of the individual patients, and this ELISPOT allowed us to monitor the response and showed a significant difference between ELISPOT-positive and ELISPOT-negative results,” Rocconi said. “That kind of significant difference wasn’t just surprising. To me, recording a 32-month difference is quite staggering.”

Dr. Eva Chalas, director of the Center for Cancer Care at NYU Winthrop Hospital in Mineola, N.Y., called Rocconi’s targeted immunotherapy efforts promising despite the infancy of the research. Chalas is not involved in Rocconi’s research.

“This form of therapy has been utilized in clinical trials in other centers and other forms of malignancies and would revolutionize our care, as well as provide a chance of long-term remission for patients, if the results of clinical trials consistently confirmed efficacy,” Chalas said.

“Stimulating the immune system to recognize cancer cells as abnormal, no matter their location or extent of spread, would offer potentially effective therapy to all patients, particularly those whose disease has spread – whether we can detect its spread or not – and those whose cancers are not sensitive to chemotherapy,” Chalas said.

“Cancer cells are normal cells gone bad, and they essentially put up blockades to the immune system saying, ‘I’m normal.’ This vaccine not only attacks them directly but removes that blockade. This differs because it’s so specific,” he said.

Rocconi said it’s also important to note that ELISPOT-negative patients averaged among them 5.8 prior rounds of chemotherapy compared with only 1.25 prior rounds for ELISPOT-positive patients.

“It’s no secret that chemotherapy weakens the immune system, so the take-home here is that we need to consider incorporating immunotherapy sooner in ovarian cancer patients, before their immune systems are compromised,” he said.