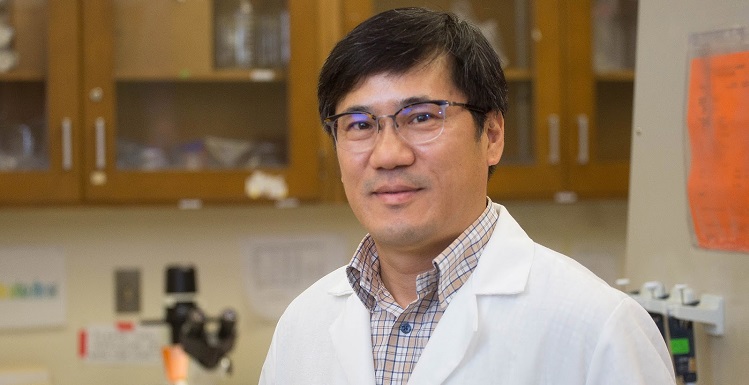 Dr. Steve Lim, assistant professor of biochemistry and molecular biology at the College of Medicine, said he hopes his research will advance current atherosclerosis therapies from preventative to treatable.

Dr. Steve Lim, assistant professor of biochemistry and molecular biology at the University of South Alabama College of Medicine, recently was awarded a $1.52 million four-year grant from the National Institutes of Health (NIH) to study cell signaling that contributes to atherosclerosis, a chronic vascular inflammatory disease.

The Research Project Grant, or R01 grant, is the original and historically oldest grant mechanism used by NIH. The R01 provides support for health-related research and development based on the mission of the NIH. This is Lim’s first R01 grant, which follows up on early stage funding from the American Heart Association.

“This award will allow us to investigate the detailed mechanisms of how focal adhesion kinase (FAK) regulates the vessel wall response to blood flow and inflammation during atherosclerosis,” Lim said.

“The goal of our study is to better understand the relationship between FAK and NF-kB in atherosclerosis, in the hope of identifying new therapeutic options,” Lim said. “Millions of people are affected by atherosclerosis in the United States, and it is the underlying problem in most cardiovascular diseases.”

Preventative approaches to reduce conventional risks – such as drugs that lower cholesterol and blood pressure – help slow down the progression of atherosclerosis, but do not eradicate the abnormal vessel wall response to environmental factors that drive atherosclerosis. As an “anti-inflammatory” therapy for atherosclerosis remains elusive, Lim’s research into FAK-mediated inflammation during atherosclerosis is considered to have high potential in finding a new therapeutic target.

“The research supported by this grant could advance current atherosclerosis therapies from preventative to treatable,” Lim said. “A FAK inhibitor that stops atherosclerosis progression – as opposed to merely delaying it – would be very beneficial to patients.”

Lim said the grant will help to establish his research program, expand the research team and upgrade the quality of the current research.

He gave special thanks to his fourth-year graduate student, James Murphy, for his work on the grant. “This R01 grant expands upon James’ graduate project, in which he seeks to find the molecular mechanism of FAK mediated NF-kB regulation in the vascular wall.”