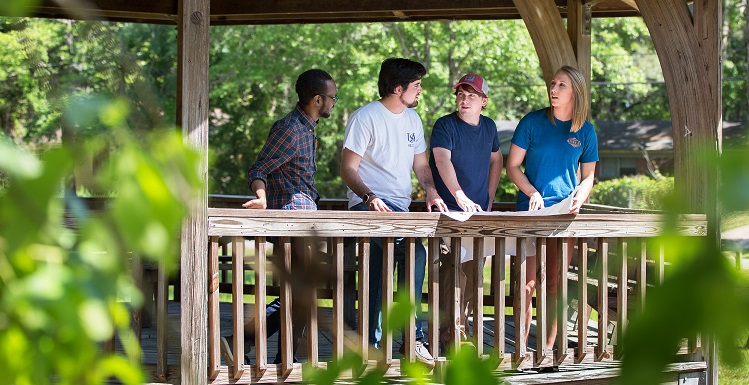 The wind whips through the trees of this forlorn city park near Mobile Bay. A couple of rusty swings sway back and forth. Nearby, a silent, rundown basketball court awaits a pickup game. There’s an old gazebo across the way, unused. A little stream meanders close by, tall weeds nearly obscuring it from view.

Stewart Park off Dauphin Island Parkway in Mobile looks rough and sad. It’s quite a contrast to the happy, energetic faces of four University of South Alabama engineering students who are walking through it on this spring day. Martin Aguirre, Ali Alshehri, Jacob Franklin and Emily Robertson have taken it upon themselves to breathe new life into this slumbering square of city property.

The four students are seniors in South’s department of civil, coastal and environmental engineering. This park is the canvas for their senior design project and their goal is to restore this scruffy spot to a happy place, bustling with neighborhood activity.

Frankin is the team leader. “The team, me included, was really drawn to this project,” he said. “We knew it was something that could be implemented in the future. Knowing that we had a hand in something that brings local families and friends together is beyond rewarding.”

The Stewart Park team is one of four teams of 17 engineering seniors from South who are working to redevelop four city parks. It is, as they say, a win-win situation. The students get practical experience and the city gets new ideas.

It all started from a conversation that department chair Dr. Kevin White had last fall with Matthew Capps, then the director of park planning and development for the city of Mobile. The two had worked together on the Three Mile Creek Greenway and other projects. “We were talking one day about our seniors needing design projects and he came up with a few that were on his list at the city,” White said.

“The city identified the parks,” Capps said. “These parks all have capital improvement program funds allocated to them. I presented an overview of each park to the students and I acted as a client for each project so that the students would get a real world experience.”

At this point, it needs to be made clear that this is not just an academic exercise.

“These are real projects, actual sites that have experienced a lack of maintenance for years,” White elaborated. “The parks lack storm water management, have erosion issues, and much of the recreational infrastructure needs upgrade, repair and/or replacement.”

So the Stewart Park team got down to work. “We had a list of about 10 projects to choose from, and Stewart Park was our choice,” Franklin said. “We really wanted to work on something that was local and had a good chance of being used.”

Capps, in his role as client for the city of Mobile, provided the students with site specific information such as current layout, utilities, etc. “I've answered emails from the students on specific questions as they pop up. I also review their 25 percent, 50 percent, 90 percent and final designs.”

Franklin said after a talk early in the semester with Capps, it was decided that all existing features at the park would be removed. The team’s redevelopment plan covers six phases of design, including:

“We decided on dividing our design into phases in order to allow the parks department to pick and choose what they wanted implemented based on their wants, needs, budgets, preferences, etc.,” Franklin said.

The other senior design teams faced similar issues with their parks. “Our civil engineering students learn to identify the problems faced by the client (the city, in this case) and then determine ways that they can cost-effectively provide solutions, just like a local engineering firm would do,” White explained.

Throughout the process, the teams would occasionally circle back to White to make sure they were on the right track, but for the most part the students were on their own, other than staying connected to their city client. Near the end of the spring semester, they faced two moments of reckoning.

First, on April 12, each team made a presentation to the civil engineering faculty. And to hear White tell it, it wasn’t for the faint of heart.

“I think the students are most anxious about the presentations to faculty.  They know we demand a lot of them. We want to make sure they have made good decisions and used appropriate design tools. We critique them pretty good. We tease them by telling them to ‘make sure you bring a box of tissues,’” White smiled.

The grilling is in preparation for the “design symposium” five days later, a presentation by the design teams to an elite audience of practicing engineers from the community. “The practicing engineers who attend ask them real questions about methods, procedures, materials, costs, viability, etc., so they need to be prepared,” White said.

Typically, about 8-10 practicing engineers attend the symposium, but this year White said at least double that number was expected. “These professionals know that these are the new civil engineers entering the profession, and they want to see how they are being prepared, and the creativity and communication skills they show.”

Even if the project looks sharp, White says it’s also important that the student engineers talk a good game.

“Civil engineers, in particular, often must communicate effectively with the public, with elected officials, with regulators, and with other engineers, so this is good practice for being a good engineer when they graduate,” White explained.

The Stewart Park team will graduate before any of their recommendations are fulfilled. That could be a bit disheartening, but what they’ve learned in the process has been rewarding.

“We've learned a ton of qualities that will set us on track to get out into the real world,” said Franklin, who already works for a small engineering firm. “This covers not only the technical aspect of engineering design, but time management, goal-oriented progression, leadership, presentation skills and much more,” Franklin said.

And through it all, Capps is optimistic that the city of Mobile also tapped into a resource that will benefit the community for years to come.

“The students are using the skills learned in class and putting them into practice,” Capps explained. “Each of these projects allowed the students to use civil engineering, storm water and drainage management, ADA compliance, green infrastructure and so much more. So I think that the students will see specific elements from their plans and concepts come to fruition.”

Looking back on his years at South and his impending graduation, Franklin said, “It's so rewarding to be able to finally use everything we worked so hard to learn, and create something that is completely of our own design.”