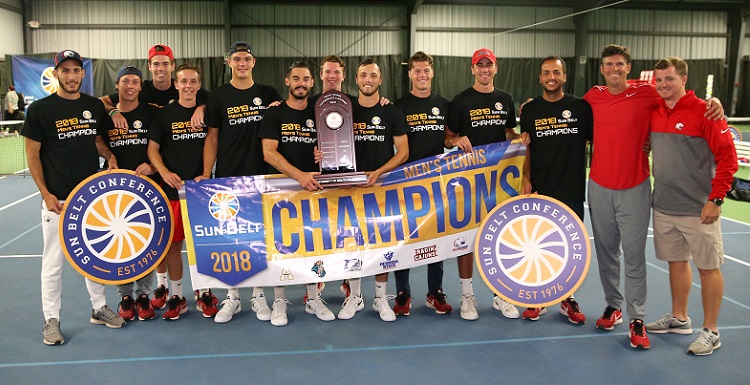 The University of South Alabama men’s tennis team dominated singles to take the Sun Belt Conference Championship Match 4-1 over Georgia State. It was the first SBC Championship for the program since 2008.

“I’m so proud of those guys,” South Alabama head coach Nick Brochu said. “We are a very young team. Our top guys are sophomores. … Those guys just bonded and believed in one another. They didn't expect one guy to pull off all the points. It came from everybody. During the tournament we had great leadership from our captains, who showed so much heart.”

The Jags pulled off Sunday's win a year after coming within two points of the title.

The match was played indoors and started with action in doubles. The No. 39 pairing of Loic Cloes and Clement Marzol cruised past Georgia State’s Sebastian Acuna and Andrei Duarte 6-1 on court 1. On court 2, South Alabama’s Olivier Gingras and Sacha Modica fell to Giles Hussey and Jack MacFarlane 6-4. Max Lapraille and Santiago di Loreto came back to force a tiebreak on court 3, but fell 7-6 (6-4) as Andrea Andrukhou and Bailey Showers picked up the doubles point for Georgia State.

“It feels unbelievable,” Cloes said. “We lost the doubles point. Our guys fought like dogs and we deserved it this year. Last year we lost, and this year our team can enjoy it.”

The Jags will find out who their opponent will be in the NCAA Tournament when it is announced during the selection show on May 1 at 4:30 p.m.