Has Degree and Lieutenant Bars, Will Travel 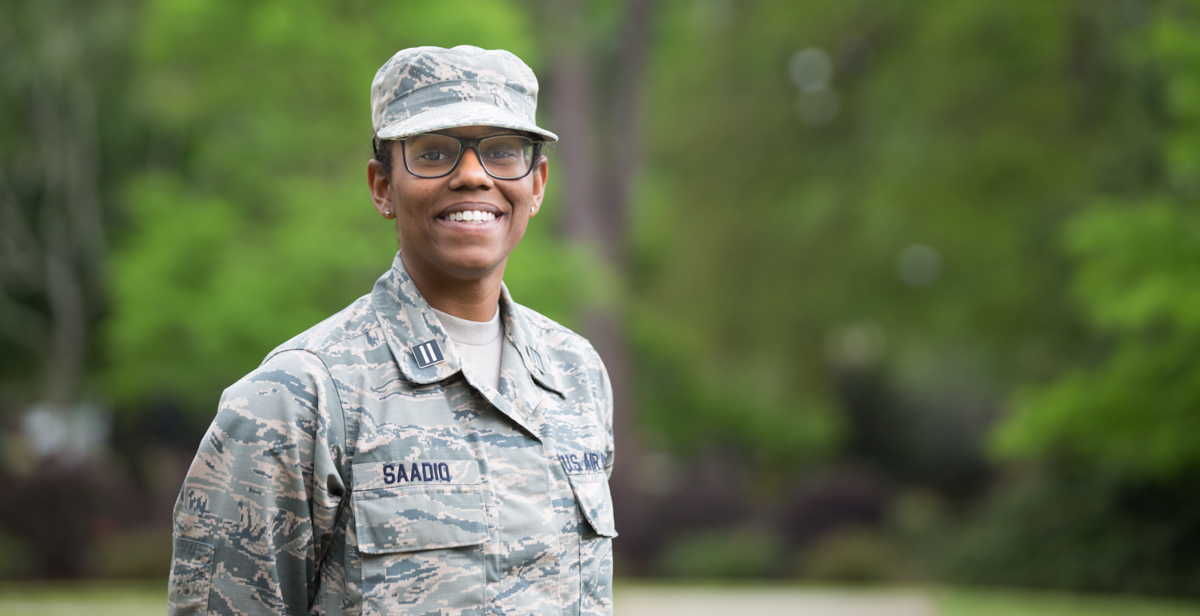 In addition to earning her degree Saturday, Khamaria Saadiq will receive the military rank of second lieutenant in the U.S. Air Force. Her first station of duty will be the University of Michigan, where she will work as a recruiter.

University of South Alabama senior Khamaria Saadiq majored in hospitality and tourism management because she wanted an exciting career to take her places around the world. Her wish begins May 4 when she receives her bachelor’s degree.

On May 5, the ROTC graduate will also receive the military rank of second lieutenant in the U.S. Air Force. Her first station of duty will be the University of Michigan, where she will work as a recruiter for a year before moving on to another, as yet undetermined, assignment.

“I will owe four years to the Air Force as a personnel officer in exchange for my college education,” Saadiq explained. “I don’t know if I will stay in longer. The Air Force offers great incentives, but I also want to use my hospitality and tourism degree to work for a great company.”

Saadiq said she learned about how great companies operate during an internship last summer at the Beau Rivage Resort and Casino in Biloxi, Miss.

“I was a hotel operations intern and worked every aspect of the operation. I got to work alongside so many people, including their events department, and I had a mentor on the job,” she said. “The company is well run, and it was everything I want a company to be. I know I want to pursue a career in hospitality and tourism management that the Air Force can’t offer to me. The internship definitely resulted in job offers, and if I hadn’t been committed to the military, I would have accepted one.”

Saadiq also learned about leadership in her role last semester as an ROTC wing commander.

“It was so important, and I’m so grateful I got to do it. I think I definitely got some gray hairs before they should have started, but it showed me what I am capable of, and there is nothing I can’t do as I go forward in life. It definitely let me know what a full-time job is like,” she said.

The 22-year-old graduate of Hoover High School in suburban Birmingham said her parents “were very serious about their children paying for college on our own and figuring out how to do it with scholarships.” At this point in her life, she sees the value of their teaching. She has worked while going to college, lived in her own apartment and paid her own bills.

She is looking forward to assorted family members, including her parents and grandmother, attending commencement and seeing her receive her lieutenant’s bars.

“I was ready to be super independent when I came to South because my parents brought us up to be independent. At first, I had unrealistic ideas such as thinking I could go to New York to study, but that was way too expensive,” Saadiq said. “But when I came here South was so pretty, and it was a good getaway, and the people were so nice. Plus, it was close to the beach. I will be leaving South, but I definitely won’t forget South. I plan to join the USA National Alumni Association, and I hope in the future South will hear good things about me.”