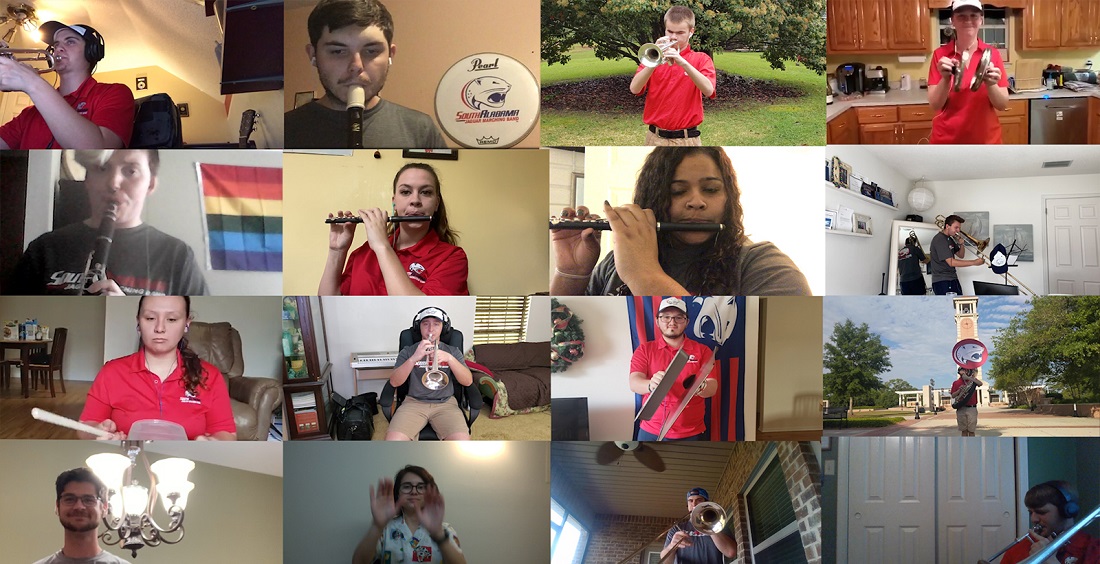 Members of the Jaguar Marching Band record a virtual performance of “South,” the University of South Alabama fight song.

For Zoom music lessons on her home computer, Dr. Andra Bohnet sports a custom backdrop of Frodo’s house in the Shire from “The Lord of the Rings.”

The South music professor keeps things light and lively, waving her arms and clapping her hands to keep time.

On the other half of the computer screen, Rebecca Bates plays her flute in what looks like a barn outside Birmingham.

The University of South Alabama junior explains that her parents’ house doesn’t have WiFi, so she goes to a shed behind her grandmother’s place in Oak Grove. Beneath wooden beams and a tin roof, she begins one of the more challenging melodies from Franz Doppler’s “Hungarian Pastoral Fantasy.”

“It still sounds a tiny bit fast. ... Make sure I’m hearing the G natural in that arpeggio. ... Try it again, all the way through.”

After her student plays a section, Bohnet often steps in and plays the same thing. The one thing they can’t do is play together, because of a one-second lag in the Internet connection.

“It’s so weird,” Bohnet tells Bates, laughing. “I’m watching your fingers and listening to the sound, but they don’t match up. It’s freaking me out.”

With that, they return to the “Pastoral Fantasy,” as student and professor making the best of distance learning during a coronavirus pandemic.

In this most unusual of spring semesters, all sorts of South musicians are practicing at home and performing whenever and however they can.

Members of the Jaguar Marching Band are recording audio and video for a virtual performance of the “South” fight song. Members of the Wind Ensemble are joining students from more than 20 colleges in a virtual piece commissioned from composer Ryan Williams.

Dr. Thomas Rowell, who leads the opera program at South, says he is still mourning the cancellation of “The Mikado” in April. The Gilbert and Sullivan classic will return next year, but several seniors will miss their one chance at performing it in the Laidlaw Performing Arts Center.

“It’s a disappointment for them, for sure,” Rowell said. “And it’s the biggest hit for me, too.”

This year, there have been positive aspects for what Rowell calls the great adventure of giving voice lessons online.

“In some respects, we’re getting more done, because I can concentrate on the student,” he said. “We don’t have as many distractions, so we can focus a bit more.”

For years, Rowell required his students to dress properly for voice lessons in his studio. This meant business casual attire, at a minimum – no shorts, T-shirts or sandals. Things are more casual for sessions on Zoom.

For Dr. Will Peterson, director of bands, the spring semester has been a blur of online tuba and conducting classes. He, too, has found a professional bright side to distance learning.

“It’s changed some of the things I do,” he said. “I’m a very interactive teacher, but I can’t do that as much, so it’s forced me to listen better. That’s been revealing for me as a teacher.”

Peterson experimented with Zoom settings for his online lessons. To play along with students, he sometimes turns off his volume, or theirs, to make it easier for them to keep time.

The lessons of music education during a public health crisis include embracing communications and recording technology. Even the most traditional educators have had to sharpen old skills and pick up new ones.

“We’ll be better for it in the long run,” Peterson said.

Dr. Laura Moore, interim chair for the department of music, said South students and teachers miss the close-knit world that revolved around Laidlaw studios and auditoriums. At home, some music students don’t have access to quality pianos. Some voice majors have trouble finding accompaniment.

Communication is only as good as their Internet connections.

“There’s nothing worse than trying to teach conducting and having everybody’s screen freeze at the same moment,” Moore said. “Then I have to go, ‘Ok, let’s try that again.’ But it’s so nice to see people. The visual aspect is so important.

“On the vocal side, we’d already done some long-distance auditions via Skype. So we were familiar with that. Being able to make the switch is just doing that on a much larger scale.”

‘Back to the Flute’

During lessons with Bohnet, Bates and her instructor share nervous jokes about an upcoming recital. They can feel the pressure. Distance learning has its limits.

“It’s helpful, but not the same,” Bates says. “But it’s way better than nothing. I’d rather do this than send in videos every week.”

When her student falters during the “Pastoral Fantasy,” Bohnet is blunt.

“The first part was good, but then you did that wacky stuff again. … Try it again. … The first two were good, the third one was crummy.”

Whenever possible, she remains positive.

“Perfect, absolutely perfect. … Trust yourself there. … Try it again, all the way through.”

Bohnet suggests Ward practice on her own with tracks recorded on music software such as Audacity or even the GarageBand computer program.

Their half-hour lesson gets interrupted twice, once when Bohnet’s Internet service goes down, and once when she gets a call about a broken appliance. She and her student talk about the crazy days of the coronavirus. They circle around to South and her upcoming recital.

“OK,” the professor finally says. “Back to the flute.”