'Commit to the Journey, Not to the Outcome'

Dr. Tyler Sexton, who completed his residency at the University of South Alabama and is now chair of pediatrics at a Mississippi hospital, spoke to graduates about overcoming obstacles. Sexton was born with cerebral palsy. Bottom photo: Bettye R. Maye, a longtime member of South's Board of Trustees and an advocate for education, told graduates to direct their lives, even if the direction isn't always perfect.

Commencement speakers at the University of South Alabama on Saturday urged new graduates to strive for achievement no matter how overwhelming the obstacle and to focus on the best road for themselves during their life journey.

More than 2,200 degrees were awarded during Spring Commencement, which was held at the Mitchell Center over two ceremonies.

Dr. Tyler Sexton, an internationally recognized motivational speaker known for overcoming a childhood diagnosis of cerebral palsy to become a successful pediatrician specializing in hyperbaric medicine, spoke at the morning ceremony. He completed his pediatric residency at South in 2010, and he’s now chair of pediatrics, wound care and hyperbaric medicine at Singing River Hospital System in Pascagoula, Miss.

Applause from students and guests interrupted Sexton repeatedly as he shared recollections of his experiences and personal fortitude to overcome his disability’s challenges.

“Early in my college career when I told one of my advisers that I wanted to be a doctor, he said ‘you’re going to have to find another career.’ I said okay, and I found another adviser,” Sexton said. “You have to remember that the spirit is more important than a broken body.”

“You have to remember that the spirit is more important than a broken body.”

Sexton and his mother have co-written a book, “God Bless Those Little Legs,” about growing up with a disability. He has been the subject of stories by ABC-TV’s “20/20,” “The 700 Club,” “The God Squad,” “Hour of Power,’ “The Helpline,” and “Focus on the Family.”

“If you live by everybody else’s approval, you’ll die by their rejection,” Sexton said, adding that he was often ridiculed because of his disability. And, he urged the graduates to do whatever it takes to overcome impossible roadblocks on the path to achievement.

“You need to do the hard work and have a good attitude because that’s what it takes,” Sexton advised. “Learn that, and then I want you to forever chase your dreams.”

Bettye Maye, long-time educator, member of South’s Board of Trustees for 24 years and a “dedicated South fan,” addressed the afternoon graduates with thoughts based on the popular poem “The Road Not Taken” by Robert Frost.

Maye, who was also a two-term member of the board of directors of the Alabama Education Association and the first African-American associate professor at the University of West Alabama, likened today’s news headlines to the poem, calling them “the symbolic headlines you see at the fork in the road.”

She challenged them to consider whether or not they “want to be that someone who wants to makes a difference” when they reach the road’s fork.

Urging them to live a life filled with integrity, Maye added, “Direct your life in some direction, even if it isn’t perfect,” she said. “Your choice of the road will make you the foundation of an even greater America. Commit to the journey and not to the outcome.”

“Direct your life in some direction, even if it isn’t perfect.”

Finally, she reminded them that a life has only limited time.

“Don’t waste it trying to live someone else’s life. Make a difference on your journey. Take action,” she urged. “And, will you take the road that will make a difference? I’m confident that you will.” 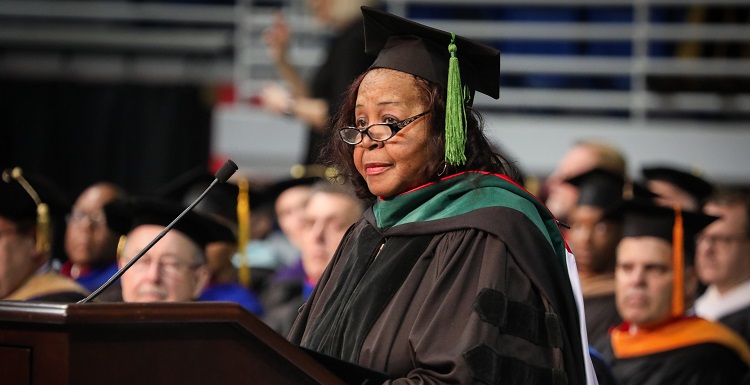