The Evolution of the Galapagos Iguana 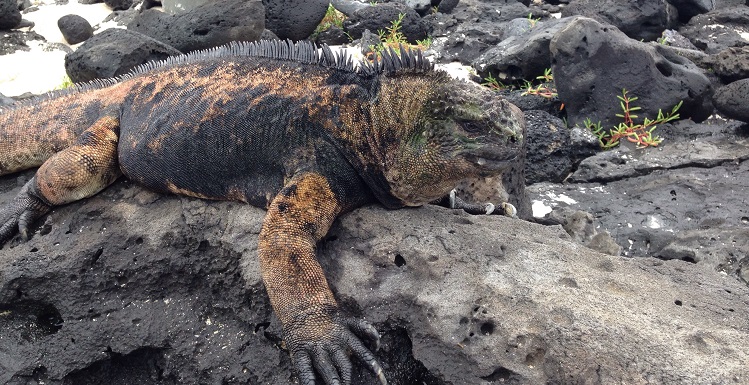 A study by two USA professors found that sea surface temperature helps explain the variation in body size of the Galapagos marine iguana, and island colonization patterns have influenced the varying body shapes.

Research on ecological and evolutionary influences on Galapagos marine iguanas is the latest development in a burgeoning relationship between the University of South Alabama and the scientific community on the Pacific Ocean island chain.

Dr. Ylenia Chiari and Dr. Scott Glaberman, both assistant professors in the department of biology, authored a paper about the Galapagos marine iguana that was published in March in the peer-reviewed journal Oecologia.

The lizards’ body size is highly variable, and the researchers examined whether the lizards’ sizes are related to different environmental conditions or the history of island colonization. The study found that sea surface temperature helps explain the variation in body size, and island colonization patterns have influenced the varying body shapes.

The scientists also considered whether the quality of the iguanas’ food is related to their size. The iguanas’ diet is very peculiar, Dr. Chiari said, because they feed on algae in the water, either in the intertidal zone or a little deeper. When there is a problem with the quality of algae, such as during the weather event known as El Niño, the iguanas have a very high mortality rate.

“All of this is very important because marine iguanas are only found in the Galapagos Islands. We know that these animals are heavily influenced by El Niño and climate change. The more we understand about their relationship with the environment, the better we can predict how they will respond to changing conditions,” Dr. Chiari said.

She and Glaberman also have worked on other research topics in the Galapagos Islands. Last fall, along with an international team of researchers, Chiari and Glaberman published a paper about tortoises. The two USA professors helped to name a new species of Galapagos tortoise, increasing efforts to protect the creatures.

The Galapagos island chain is a textbook example of evolution in action, Dr. Chiari said, because it is both remote and volcanic. Organisms that found their way to the islands mostly evolved in isolation. For that reason, the Galapagos Islands contributed to Charles Darwin’s theory of natural selection.

Exposing students to that unique ecosystem is the aim of a 2017 summer course in the Galapagos Islands that Drs. Chiari and Glaberman are organizing. Dr. Chiari said it is very exciting to have the chance to show students the things they normally would only read in books or hear in lectures. Conducting research in the Galapagos requires permits and access that isn’t easy to obtain, so the course is an unusual chance for students, who will be in the field collecting data and observing animals.

The summer course “is a fantastic and unique opportunity,” Dr. Chiari said. “We are giving students the chance to be field biologists in the place where if you want to study biology, it’s the place to be.”

USA is also working to strengthen relationships with faculty and staff at the Galapagos Science Center, a research center that is a partnership between the University of North Carolina at Chapel Hill and the Universidad San Francisco de Quito in Ecuador. Chiari said there is discussion about beginning an exchange program.