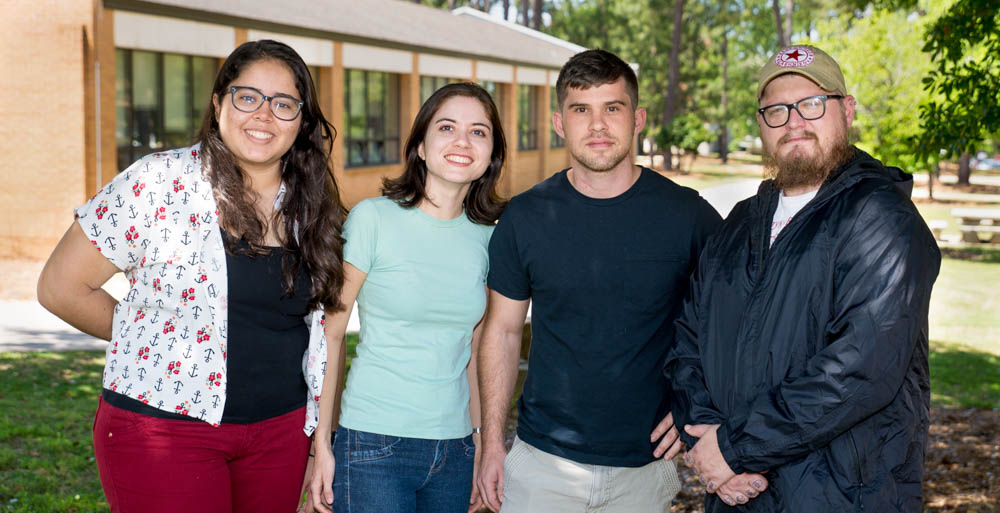 The University of South Alabama is one of only five universities in the United States to participate in a pilot exchange program through the American Association of State Colleges and Universities. From left, Ilza de Oliveira Feitosa Passos and Jéssica Campêlo de Sá visited Mobile for two months, and South students Eric Anderson and Dale Pate will travel to Brazil.

Students at the University of South Alabama experienced an infusion of Brazilian culture this spring thanks to a student exchange pilot program through the American Association of State Colleges and Universities.

South was one of only five universities in the U.S. chosen to participate in the program, which was developed in partnership between the association and the Brazilian Ministry of Education’s Language Without Borders division. The program involves 10 American and 10 Brazilian students, for the purposes of cultural and educational enrichment and recruitment.

In March, the University’s Global USA division welcomed Ilza de Oliveira Feitosa Passos, 23, and Jéssica Campêlo de Sá, 26, for a two-month visit as part of the program. The two teach English at the Federal University of Ceará in Fortaleza, Brazil.

And at the end of this month, USA students Dale Pate, 37, and Eric Anderson, 27, will fly to Fortaleza for their two-month visit. The exchange program is being handled by Global USA, which is dedicated to fostering worldwide engagement by the University and its students.

“The whole purpose of this is to share cultures,” said Dr. Richard Carter, associate vice president for global engagement. “As you find out more and more about other countries and cultures, the world gets much smaller and you learn the benefit of keeping an open mind.”

As part of the exchange program, Oliveira and Campêlo while at USA offered presentations on Brazilian culture and instruction on the Portuguese language. During their sojourn to Fortaleza, Anderson and Pate will conduct similar presentations.

For the Brazilians, the visit to Mobile was not only a personal dream come true but a key component of their professional development. For the last two years they have taught English, having earned their certification while undergraduates at Ceará. Their classes are often filled with faculty members, as well as fellow students.

The Brazilian instructors learned the American language and culture through television, movies and Internet research; interacting with Americans studying at their university via the Fulbright scholarship; and students who traveled to the United States and returned to Fortaleza.

“We were always upset that the people we taught in Brazil got to travel abroad but we didn’t, and this program gives us the opportunity to experience the American culture firsthand,” Oliveira said.

One of the requirements for the exchange program is that participating students haven’t been to the host country before. USA students Anderson and Pate have each traveled internationally through University study abroad programs, and they have high hopes for their trip to Brazil.

Pate, a self-described “Army brat” and junior majoring in electrical engineering, traveled to Russia in 2017 in pursuit of his minor. He’s been to Germany, France, Mexico and Guatemala, but never below the equator.

He is also interested in learning more about the English programs offered at the University of Ceará. Pate said he might want to pursue a career in teaching, and doing so while living abroad could be a perfect fit for him.

“I never in my wildest dreams thought these kind of opportunities existed,” he said.

According to Carter, there are currently about 530 international students enrolled at the University, representing 60 countries. USA recently created a merit scholarship targeting great minds from other parts of the world, he said, because “not only do we want students, we want the best students.”

“We are a port city and have always been an international community, and the University supports that very well through global engagement,” Carter said. “Our goal is to visit other countries and talk about the richness of Mobile, and all the opportunities that come with it.”

In the last two years, Anderson has traveled to Poland and the United Kingdom to study anthropology, his major. He hopes to one day work in education, or at a museum, and said USA’s study abroad program has given him incredible access to diverse cultures and history.

He said he looks forward to comparing and contrasting the cultures of America and Brazil during his two months in Fortaleza. His presentations will touch on the Native American cultures of the Mississippians and Poarch Creeks in Moundville and Atmore, respectively.

“Since this is a pilot program, we’re all kind of fishing in the dark in terms of their expectations,” Anderson said. “So we’re bringing a lot to hit all the marks.”

And that includes information about the Mobile Delta, he said.

“The delta is considered the Amazon of the north, so that is hopefully a great subject to connect and bring our two cultures together,” he said. “We’re similar in many ways but also so different.”

Campêlo said she looks forward to returning to the United States, but said the brevity of the visit to Mobile had its benefits.

“One of the biggest plusses of this program is that it’s more of a cultural experience,” she said, “because it’s only two months, instead of a more formal experience.”

One surprise, Campêlo said, is that Mobile is more globally diverse than either she or Oliveira originally thought. During visits to area high schools they met students from Tanzania, Vietnam, Guatemala, the Dominican Republic and the Philippines.

“It was amazing, the opportunity to interact with so many different people in one place,” Oliveira said. “We want this program to work out because we want other students like us to come.”

Campêlo added, “It blew my mind how kind and helpful everyone in Mobile is. If I could take everyone back home with me, I would.”