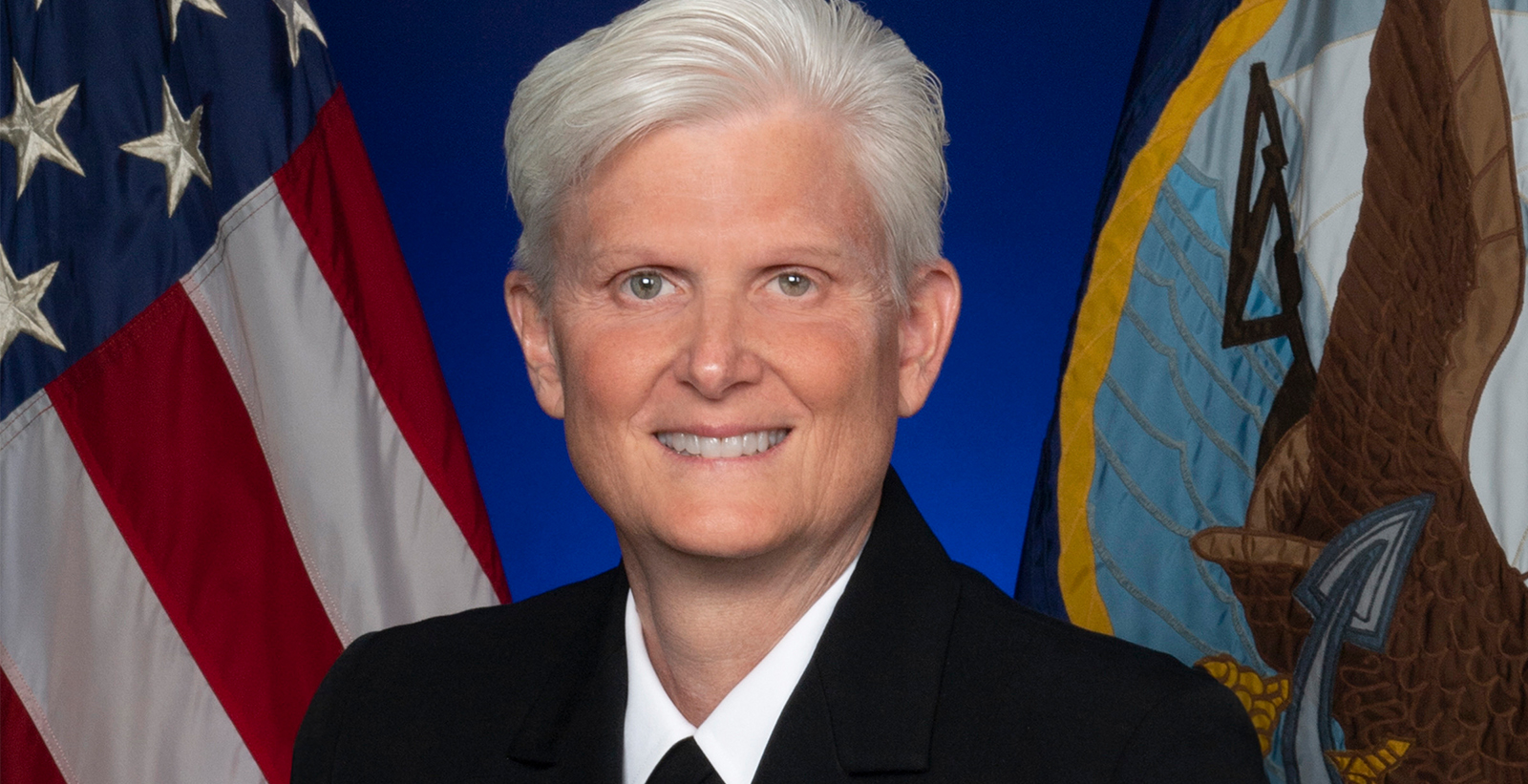 Navy Rear Admiral Gayle Shaffer, a 1987 biology graduate of the University of South Alabama, is the first dentist to serve as deputy surgeon general.

When Gayle Shaffer left the Midwest for college on the Gulf Coast, it didn’t take long for her to discover Southern hospitality at the University of South Alabama.

“I felt at home immediately,” she said. “You couldn’t walk across campus without every single person you passed saying ‘Hey.’ I loved it. I made some friends down there and they taught me how to talk Southern. I felt like I was part of a community. That’s what always resonated with me.”

Shaffer — now Rear Admiral Gayle Shaffer, deputy surgeon general of the Navy — had a scholarship at South. She also worked part-time in the marine biology lab of Dr. John Freeman, who was studying the molting cycle of blue crabs.

“My job — it was really tough, let me tell you – was to go down to Dauphin Island, go crabbing and bring blue crabs back to the lab,” she said. “Then I just had to make sure they got fed every day, and I cleaned their tank and did what I needed to do. Every once in a while, we’d get an escapee running through the lab, and I’d corral him and get him back in the tank, but it was a lot of fun.”

Shaffer earned a biology degree from South in 1987, went on to dental school and then joined the Navy. What began as a job out of school turned into a career of more than 30 years.

When she joined the service, women weren’t allowed on combatant ships. Now they serve on everything from aircraft carriers to submarines.

Shaffer, 59, completed two Mediterranean deployments. She served in Okinawa and Japan. She led a medical facility in Djibouti, Africa, and commanded a joint medical unit in Kandahar, Afghanistan.

Since 2014, she’s been stationed in Washington, D.C. Last year, she became the first dentist appointed deputy surgeon general of the Navy.

In a Zoom interview from her office, Shaffer wore a Navy uniform with twin stars on the shoulders. She recalled her days at South. She described learning how to seize opportunities and build a career.

“You have to have good mentors who are going to push you outside your comfort zone,” she said. “You have to be comfortable being uncomfortable. And it’s important not to be your own barrier. I decided early on that if I was offered certain things, I wasn’t going to say no. It’s better to volunteer than be voluntold.”

At South, Paige Walsh was Shaffer’s roommate in the Delta residence hall. Then they rented a house in the Hillsdale neighborhood. Classmates remember her potato soup.

“She was always the adult in the room — always,” Walsh said. “She was very driven in school, but to accomplish what’s she’s accomplished, my goodness.”

Walsh and Shaffer belonged to different sororities at South. They had fun. They got around town in a convertible.

“She had the coolest little car, a Triumph Spitfire,” Walsh said. “We drove all the way to Chicago once to visit her family. I couldn‘t hear a thing when I got out of that car.”

“It’s not every day you have a sorority sister who’s an admiral, right?” Rideout said. “She was always on top of everything, and so darn smart. I knew that whatever she was going to do, she was going to do it to the best of her ability.”

Shaffer grew up in Bloomington, Illinois, but her family planned a move to L.A. — “Lower Alabama” — and she enrolled at South.

After graduation and dental school, she planned to see the world through the Navy. This plan got off to a slow start. She laughs when she says her first assignment was at the Great Lakes Navy Base back in the Midwest.

Her first ship was the USS Puget Sound, a destroyer tender.

“They don’t even have those anymore,” she joked. “That tells you how old I am.”

In an interview with Navy Medicine Magazine for Women’s History Month, Shaffer talked about the importance of believing in herself and not second-guessing her own decisions. She accepted difficult jobs and worked hard to succeed. She earned a reputation and carried it through her career.

Shaffer said she’s still learning on the job. She hasn’t seen it all. There’s always something new to master.

In the U.S., she’s been stationed everywhere from Jacksonville, Florida, to Camp Pendleton, California, and Bethesda, Maryland. She earned a master’s degree in health sciences from George Washington University in Washington, D.C.

She got married in 1998. Her husband, Shawn Shaffer, was also in the Navy.

“We met after he retired,” she said. “He’s been able to have kind of a second career in the Navy, following me around.”

Shaffer loves musical theater and traveling to New York City. She jokes with her Alabama friends about being able to visit them when she retires. She wouldn’t recognize the University if she visited, they say.

“The campus used to be really small,” she said. “Now they’ve got the big clock tower and everything.”

Over the years, Shaffer considered changing careers, but never left the Navy. She chokes up a little when talking about her shipmates, colleagues and time in the service.

“When I weighed my options, the Navy was my best one,” she said. “I realized that what I was going to miss most was the camaraderie. You’re working with the best people you will ever meet in your lifetime.”