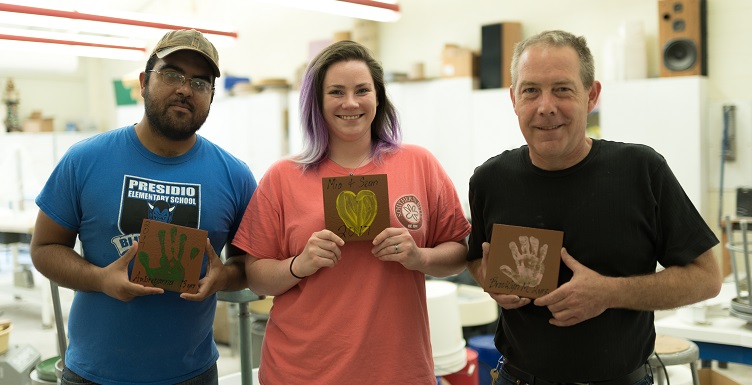 Graduate student Ramon Deanda, left, junior Lauren Carroll and Professor Tony Wright show some of the handprint tiles that will be on display at Medal of Honor Park's playground.

The children arrived so young that they clenched tight their fists, refusing to open their palms. And there were those with creases in their hands from age.

In colors of blue, pink, red, yellow and green, they left their mark on terra cotta tiles that will be on display at the new playground at Medal of Honor Park, a few miles south of the University of South Alabama.

“There was a flurry of activity, but there was a lot of joy there,” said Tony Wright, USA professor of ceramics.

Wright and two of his students, with the help of community volunteers, created the more than 300 handprint tiles — or footprint tiles, in the case of the youngest children who would not open their hands — as part of a fundraiser for the city-owned park off Cottage Hill and Grelot roads.

Wright donated his time for the project, while the city picked  up the cost of materials.  “We want our students to get a diverse education,” Wright said. “Projects such as these allow us to put into practice some of the skills we are learning in the classroom to benefit the community.”

Over the course of two Saturdays, participants came by the Connie Hudson Regional Senior Community Center and, for a donation, made their marks on tiles using underglaze. USA junior Lauren Carroll then used what looked like a baby nasal aspirator with a tip to script the names on each tile. Back at the studio, Wright and his students applied glaze to the 6-by-6 inch pieces of artwork before they were loaded into a kiln and fired to over 1,900 degrees Fahrenheit.

The hardest part, it turned out, was getting some of the youngest and wiggliest children to place their hands on the tile, said Ramon Deanda, who got time under his belt as an elementary school teacher in Texas before enrolling in South’s Master of Fine Arts program. Deanda was the second half of Wright’s student tandem.

Most of the children who participated were under 13, Wright said, though there are some handprints in the mix from adults.

The overall playground project is scheduled to be completed by the end of May, weather permitting, according to the city. The tiles will be placed alongside those that were done more than 20 years ago when the last incarnation of the playground was constructed.

“Tony and his students have been absolutely vital. We so much appreciate them lending their expertise and assistance to this project,” said Councilwoman Bess Rich, who secured public funding for the playground project along with money allocated by County Commissioner Connie Hudson. The park lies in their districts. “The playground at Medal of Honor Park has always been a community effort, so it’s incredibly fitting for the University, which plays such a large role in our community, to be such a big part of this project that will benefit families from across the city.”

For Carroll, she said the number of people in Mobile who are involved in ceramics, from hobbyists to professionals, is sizeable, and “giving to the community like this expands the potter community’s reach.”

Wright and USA ceramics students also are involved in other community projects, notably crafting bowls each year for Art Soup, a fundraiser to support organizations involved in homelessness outreach. As this project winds down, Wright said he is looking forward to getting out of his studio and seeing some of the same faces — and hands — that he saw at the Connie Hudson Regional Senior Community Center.

“Hopefully, they won’t be disappointed,” he said.