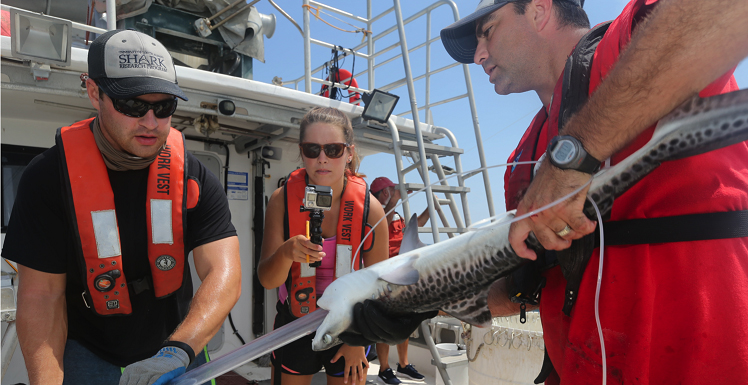 If you’ve ever wondered what a tiger shark likes to eat, wonder no more.  But prepare to be surprised.

University of South Alabama marine scientists Dr. Marcus Drymon and department chair Dr. Sean Powers, who’ve been conducting a shark monitoring program in the Gulf of Mexico for ten years, will have their latest research featured on Thursday, June 9 at 6 p.m., when National Geographic’s Nat Geo Wild channel presents “Blitzkrieg Sharks.”  The program will focus on sharks that “seem to be going off the menu,” according to the network’s website.

So, what exactly is “off the menu” for the Gulf’s tiger sharks?  Try woodpeckers.  Doves.  Wrens.  In other words, land birds.

Drymon, a research assistant professor at the Dauphin Island Sea Lab, has a logical explanation.

“Preliminary satellite tracks from these animals show they are somewhat resident to the northern Gulf of Mexico,” he said.  “As far as how a tiger shark catches these birds, we presume they consume dead birds that fall from the sky and land on the water's surface.”

And while that varied menu is certainly a curiosity, there’s far more to the research than just totaling up today’s lunch.

“Our interest in this project is in understanding the mechanism by which tiger sharks are linking marine and terrestrial foodwebs (i.e., consuming terrestrial birds),” Drymon said.  “Understanding these trophic interactions is fundamental to both the ecology and the management of this species.”

The work by the USA marine scientists takes place throughout the north central Gulf of Mexico, and the resulting data have been used in stock assessments for many shark species, said Drymon, whose research has been directed toward increasing the effectiveness of management measures for coastal sharks.

He added that USA’s marine sciences students have been active research participants since the program first launched a decade ago.  For marine sciences graduate student Emily Seubert, the research is both fascinating and important.

“I never get tired of talking about sharks,” exclaimed Seubert.  “Basically, I'm curious what sharks are where, what they're eating, and what role they play in the ecosystem.”

Seubert is assisting in catching and tagging the tiger sharks, and then tracking them through their journey in the Gulf.  “As far as my research interest goes, I look at the species and functional biodiversity of apex (i.e., top of the food chain) predators across the northern Gulf of Mexico and how that ties in to the resiliency of an ecosystem in response to a natural disaster.”

A Seattle native with a bachelor’s degree in biology with marine emphasis from the University of California, Davis, Seubert freely admits coming to South was not in her plans.

“Moving down to Alabama and being offered to work on shark ecology was nowhere in my wildest dreams where I thought I'd end up, but I am so very grateful for the opportunities that have presented themselves to me and for everything I have learned in such a short time period.”

The National Geographic program “Blitzkrieg Sharks” will debut at 8 p.m. and 11 p.m., local time, on Sunday, May 29 on the Nat Geo Wild channel.