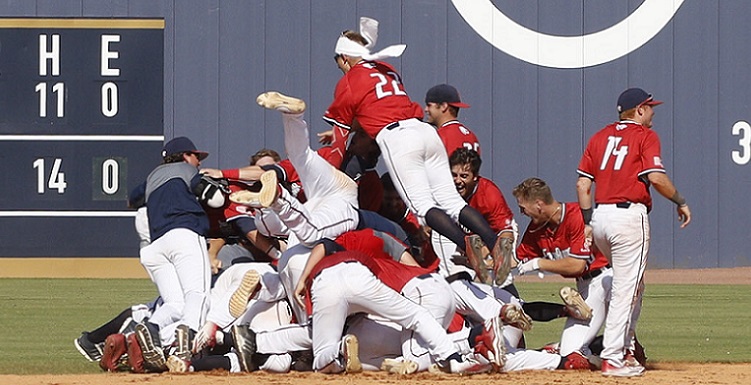 STATESBORO, Ga. – Brendan Donovan delivered a walk-off RBI single in the bottom of the 10th inning to help the No. 3 University of South Alabama baseball team defeat Georgia Southern 7-6 and win the 2017 Sun Belt Conference Championship at J.I. Clements Stadium.

The win marked South Alabama's 11th SBC Tournament title, and its first since 2005.

Dylan Hardy reached on a one-out walk in the bottom of the 10th, and moved to third on a pinch-hit single to right field by Paul Russo to put runners at the corners with one out. Russo stole second before Donovan laced a 2-2 pitch from Eagle right-hander Jacob Condra-Bogan to left field that scored Hardy with the game-winning run.

"I got a fastball," Donovan said. "He (Condra-Bogan) was pitching me really well. I was looking for something up that I could drive to the outfield and get a sacrifice fly. I just got the barrel to it, and as soon as I saw it go up I knew we had a chance."

The Eagles faced a two-run deficit entering their final at-bat, but rallied for three runs to take a two-run lead in the top of the ninth inning. Logan Baldwin singled to left field to lead off the inning, and Tyler Martin reached on a hit by pitch. Ryan Cleveland then lifted a 3-2 pitch from Jaguar right-hander Matt Peacock over the center field wall for a 6-4 advantage.

But USA answered with a pair of runs in the bottom of the ninth on back-to-back solo home runs by Dylan Hardy and Eddie Paparella to tie the game 6-6. Travis Swaggerty singled to left field with one out and advanced to second on a groundout to shortstop off the bat of Wells Davis. Georgia Southern intentionally walked Drew LaBounty to face Matt Bolger, who drew a two-out walk to load the bases. But Eagle right-hander Anthony Paesano induced an inning-ending groundout to first base off the bat of Carter Perkins to escape the jam and force extra innings.

Evan McDonald drew a leadoff walk in the top of the 10th, and moved to third on a single to left-center field by Baldwin to put runners at the corners with one out. USA right-hander Avery Geyer recorded the second out of the inning at the plate when he fielded a bunt by Cal Baker on a safety squeeze and fired to Perkins who tagged McDonald sliding into the plate. Cleveland drew a walk to load the bases for Jordan Wren, but Geyer escaped the jam with an inning-ending flyout to left field before the Jags rallied for the win in the bottom-half of the frame.

"What an unbelievable championship game," USA head coach Mark Calvi said. "What a way to end a long week. All I can say is that ordinary players and ordinary teams don't win this kind of game. We have extraordinary kids, they have been from the day they set foot on campus and they showed it again today. They have incredible character and makeup, and they never quit. We've had our share of adversity, but these guys are relentless. A lot of people like to throw that word around, but this team - they truly are. You could have our whole team up here. They work, things aren't always easy, and they keep playing. I don't know if I've had a better group. I've had the fortune to be a part of some really good teams with good character and makeup – this team is right up there. It's fitting that we won it. Congratulations to Georgia Southern, they're a fantastic ball club and their guys never quit either. Our guys just kept fighting, and I can't say enough good things about this team. They deserve to be in a regional."

Georgia Southern (38-21) threatened in the top of the first inning, but did not push across a run. Steven Curry led off the game with a walk, and advanced to second with two outs on a wild pitch before Ryan Cleveland reached on a walk. Jordan Wren then reached on a hit by pitch to load the bases for Mason McWhorter, but USA left-hander Andy Arguelles recorded an inning-ending strikeout to escape the jam.

The Eagles looked to take a one-run lead in the top of the second inning on a two-out single to right field by Curry, but Jag right fielder Brendan Donovan fired to Carter Perkins at home plate to cut down Evan McDonald attempting to score the game's first run and preserve a scoreless tie.

South Alabama took a one-run lead in the bottom of the third. Hunter Stokes led off the inning with a single back up the middle of the infield, and Perkins followed with a double to the right-center field gap to put two runners in scoring position with no outs. Will Luft followed with a sacrifice fly to left field to score Stokes for a 1-0 Jaguar lead.

The Jaguars doubled their lead in the bottom of the fourth inning. Travis Swaggerty singled through the right side of the infield with one out, and advanced to second on a groundout to first by Wells Davis. Drew LaBounty followed with a two-out RBI single to left field to plate Swaggerty for a 2-0 advantage.

USA extended its lead in bottom of the fifth inning. Dylan Hardy reached on a one-out infield single, stole second and scored on a two-out double down the right field line by Donovan for a 3-0 lead.

The Eagles responded with a pair of runs in the top of the sixth to cut the USA lead to one. Mitchell Golden singled to lead off the inning with a single through the left side of the infield, and Brazil reached on a hit by pitch. A sacrifice bunt by McDonald moved both runners into scoring position with one out. Curry followed with a two-run single to center field to cut the Jaguar lead to 3-2.

USA answered with a run in the bottom of the sixth on a leadoff solo home run over the right field wall by Stokes on a 1-0 pitch from Eagle right-hander Landon Hughes to double its lead at 4-2.

Georgia Southern plated a run in the top of the eighth to cut its deficit to one. Golden led off the inning with a single to left field, and advanced to third on a single to right field by Brazil to put runners at the corners with no outs. McDonald then hit into a 4-6-3 double play that allowed Golden to score and cut the Jaguar lead to 4-3.

Jaguar right-hander Avery Geyer (3-2) tossed 1 1/3 scoreless innings and allowed just one hit with a pair of walks to earn the win. Eagle left-hander Adam Kelly (1-1) allowed one run on one hit with one walk in one-third of an inning in the loss.

Jaguar right-handers Randy Bell and Tyler Carr, Hardy, Perkins and Swaggerty were named to the SBC All-Tournament Team in addition to Donovan's most outstanding player award.