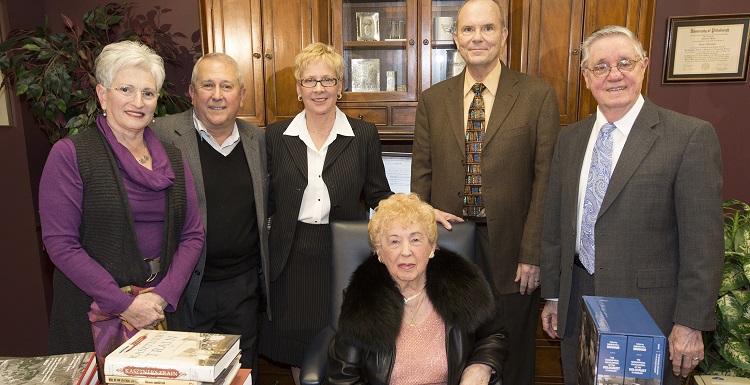 The Gulf Coast Center for Holocaust and Human Rights Education has donated a fourth book collection to the USA Marx Library for its Agnes Tennenbaum Holocaust Library Collection.

The collection, named in honor of Holocaust survivor and Mobile resident Tennebaum, who died on Memorial Day, was established in 2013 with the center’s first donation of more than 500 books and other memorabilia. Tennenbaum, a survivor of the Auschwitz concentration camp, was a 17-year-old newlywed living in Hungary at the beginning of World War II.

Tennenbaum, who lived to 93, moved to Mobile in 2006 to live near her only son and his family. She was a frequent speaker at area schools and civic groups where she shared personal recollections of losing her family members one-by-one; frequently seeing Dr. Josef Mengele, the Nazi “Angel of Death;” and being forced to work in an underground munitions factory. American troops liberated the concentration camp in 1945.

The donation increases the entire Tennenbaum Collection to almost 700 books and other memorabilia, making it a vital collection for Holocaust education.

“We have the largest and most comprehensive collection of this type, which covers all aspects of the Holocaust, anywhere in the immediate region,” said Dr. Richard Wood, dean of the USA Libraries. “That makes this collection very important for student research.”

This donation focuses on the newest publications from university presses, outstanding publishers and Yad Vashem, the World Holocaust Remembrance Center in Jerusalem. The additional books include memoirs, biographies, post-Holocaust studies, as well as books focusing on youth, representation and remembrance, ghettos and camps, diaries and letters, resistance, genocide, Poland, Hungary and Germany.

“When we made the original gift of materials opening up the Agnes Tennenbaum Holocaust Library Collection, we said that the gift came with a commitment on the part of the Gulf Coast Holocaust Center to continue helping the collection to grow,” said Jerry Darring, co-founder and director of the center. “Since that original gift in 2013, the center has made four gifts totaling over $10,000. We made a commitment, and we are keeping it.”