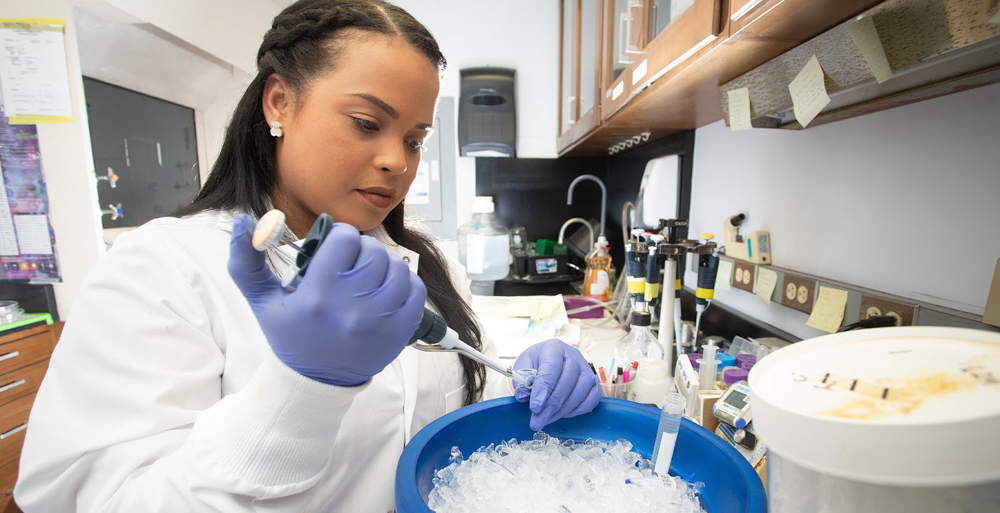 The supplement — which aims to improve the diversity of the research workforce by recruiting and supporting students, post doctorates, and eligible investigators from groups that have been shown to be underrepresented in health-related research — will provide additional funding for a $1.52 million NIH R01 grant led by Dr. Steve Lim, assistant professor of biochemistry and molecular biology at the USA College of Medicine.

African Americans, Hispanics and American Indians are among the racial and ethnic groups shown to be underrepresented in biomedical research. “As a female of Hispanic descent, this award makes me feel empowered, welcomed into the research community, and will help kick off my scientific career,” Rodriguez said.

Lim said the NIH offers this opportunity and helps support the College of Medicine’s mission to be more diverse in the recruitment of scientists. “I believe the NIH Diversity Supplement is a great way to give under represented groups an opportunity that they may not normally have,” he said. “I am determined to support Yelitza, and this diversity grant helps me support her by providing a more well-rounded research training opportunity.”

As an “anti-inflammatory” therapy for atherosclerosis remains elusive, Rodriguez and Lim’s research into FAK-mediated inflammation during atherosclerosis is considered to have high potential in finding a new therapeutic target.

The Research Project Grant, or R01 grant, is the original and historically oldest grant mechanism used by NIH. The R01 provides support for health-related research and development based on the mission of the NIH. Learn more about Lim’s grant here.