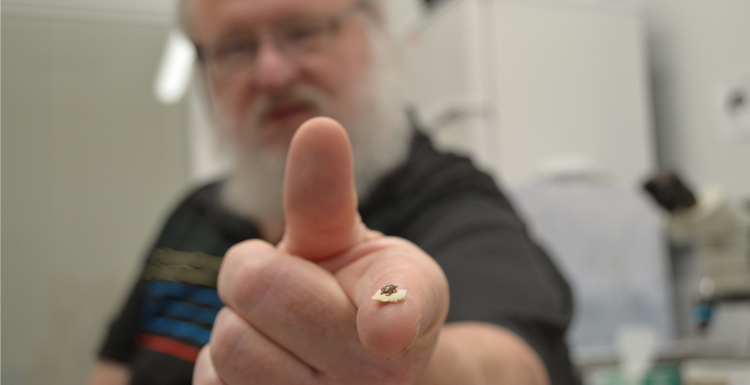 Dr. John McCreadie, University of South Alabama professor of biology leads a project to produce a detailed understanding of both tick and tick-borne disease distribution in Alabama.

Dr. John McCreadie, University of South Alabama professor of biology, was recently awarded a $75,000 grant from the State of Alabama to study the distribution and prevalence of ticks and tick-borne diseases in Alabama.

The grant builds upon and continues previous work and collaboration with Joel Borden, instructor in USA’s biology department, and Dr. Jonathon Rayner and Dr. Ryan Wood [JS1] in the USA department of microbiology and immunology, which was funded by the State of Alabama for $135,000.

The program, established in 2018, is the only statewide survey for ticks and is seeking help from the public.

The primary goal of this project is to produce a detailed understanding of both tick and tick-borne disease distribution in Alabama. The research team focus on 22 human pathogens and three common ticks known to transmit disease to humans – deer ticks, the dog tick and the lone star tick.

“Tick populations and tick-borne diseases appear to be on the rise, both nationally and in Alabama,” McCreadie said. “Because of that, we can expect more people to come into contact with both ticks and the diseases they carry.”

In 2019, more than 400 cases of Southern Tick Associated Rash Illness, or STARI, were reported in Alabama. Because many people are unfamiliar with the disease, it’s believed that the number is a mere fraction of the number of actual cases.

“Understanding the distribution of ticks in Alabama is critical to assessing the risk of disease to the population,” McCreadie added.

People affected with STARI may have a rash and suffer from fatigue, headache, fever and muscle pains. McCreadie said it isn’t clear if antibiotic treatment is necessary for patients with STARI, but the disease resembles early Lyme disease, and those patients are often treated with oral antibiotics.

You can help with this research by sending ticks found on a person or pets. Sending them is easy – just tape (Scotch tape is best) the tick to a piece of paper and mail to:

Submitted ticks will be identified to species, and this information passed along to the person submitting the specimen. The only information needed is the location and date when the tick was found.